In this paper, we proposed and developed Function-Oriented Networking (FON), a platform for network users. It has a different philosophy as opposed to technologies for network managers of Software-Defined Networking technology, OpenFlow. It is a technology that can immediately reflect the demands of the network users in the network, unlike the existing OpenFlow and Network Functions Virtualization (NFV), which do not reflect directly the needs of the network users. It allows the network user to determine the policy of the direct network, so it can be applied more precisely than the policy applied by the network manager. This is expected to increase the satisfaction of the service users when the network users try to provide new services. We developed FON function that performs on-demand routing for Low-Delay Required service. We analyzed the characteristics of the Ant Colony Optimization (ACO) algorithm and found that the algorithm is suitable for low-delay required services. It was also the first in the world to implement the routing software using ACO Algorithm in the real Ethernet network. In order to improve the routing performance, several algorithms of the ACO Algorithm have been developed to enable faster path search-routing and path recovery. The relationship between the network performance index and the ACO routing parameters is derived, and the results are compared and analyzed. Through this, it was possible to develop the ACO algorithm. View Full-Text
Keywords: Function-Oriented Networking; programmable networking; Ant Colony Optimization Algorithm; ACO; network routing Function-Oriented Networking; programmable networking; Ant Colony Optimization Algorithm; ACO; network routing
►▼ Show Figures 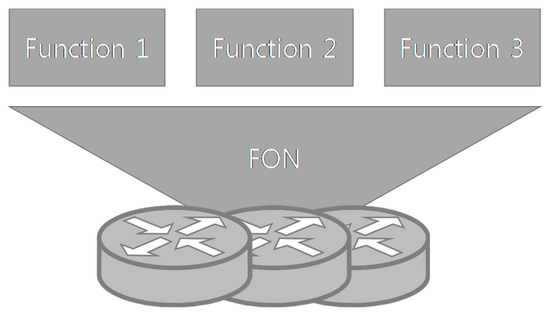