The importance of the Lorentz transformation (LT) in the special theory of relativity can hardly be overemphasized. Physical laws are Lorentz-covariant between two inertial frames; namely, the form of a physical law is invariant under the LT. This is called the Lorentz symmetry. The proper orthochronous LT forms a group and reduces to the Galilean transformation (GT) as the speed of light approaches infinity. The mathematical structure of the LT is simple, while the conceptual change involved in interpreting it properly is profound. This explains the relentless interest in re-deriving and re-deciphering the LT, even a century after the birth of the theory.
Einstein’s original derivation of the LT [1] was based on the principle of relativity and the assumed constancy of the speed of light (Einstein’s second postulate). It is now known that the second postulate is not a necessary ingredient in the axiomatic development of the theory. It has been shown, as far back as 1910s [2,3], that the LT can be derived using the velocity reciprocity property for the relative velocity of two inertial frames and a mathematical requirement of the transformation to be a one-parameter linear group [4,5,6,7]. In fact, the mathematical form of the LT was known before Einstein published his seminal paper. Pauli provided a brief historical background of the theoretical development of the LT before Einstein’s 1905 paper [4]. In particular, it was Poincaré who first recognized the group property of the LT and named it after Lorentz [8]. Both the velocity reciprocity property [9,10] and the linearity property [11,12] can be deduced from the presumed space–time homogeneity and the space isotropy, which are the embedded characteristics of Euclidean space and time [13,14]. Therefore, special relativity can be formulated on a weaker base of assumptions than Einstein’s, and special relativity becomes purely kinematic with no connection to any specific interactions or dynamical processes. These efforts are more than pedantic pursuits for intellectual satisfaction, but greatly extend the original scope for unifying electrodynamics and mechanics. To the present knowledge it is generally believed that the Lorentz symmetry serves as a universal principle to describe the world manifold in which all fundamental processes take place, except, perhaps, for the quantum gravity phenomena [15]. To put it in a modern context and future perspective, recent interests in reformulating the logical foundation of special relativity have been mainly invoked by the experimental search for the evidence of the Lorentz-violating effects [15,16,17]. For example, relaxing some presumed postulates can lead to a “Very Special Relativity” proposed by Cohen and Glashow [18,19,20] or an extension of special relativity by Hill and Cox [21] that is applicable to relative velocities greater than the speed of light. These extensions largely widen our scope of exploring the more fundamental side of Lorentz symmetry and give impetus to further experimental research.
A prevailing theme in the literature is to reformulate special relativity in terms of intrinsic space–time symmetry principles [22,23,24,25,26], where the form of the space–time transformation is invariant under the symmetry operations, and auxiliary mathematical requirements such as group property can be minimized. The practice of replacing the mathematical requirement of group property by a more fundamental symmetry principle is appealing. Not only is it more axiomatically natural from the physical point of view, but it also provides a perspective capable of admitting fundamentally new physical concepts. In this paper, we sort out the possible space–time symmetries which leave the LT invariant under the corresponding symmetry operations. One of the most surprising observations is that the LT is intrinsically related to some discrete space–time symmetry, while the LT itself forms the basis to describe the continuous Lorentz symmetry to gauge physical laws. We reveal two symmetry operations under which the LT is invariant; namely, (1) the frame-exchange space-inversion (FESI); , ; and (2) the frame-exchange time-inversion (FETI); , . To best demonstrate the utility of the proposed symmetry principle, we re-derive the LT without assuming the mathematical group property a priori. We show that either the FESI or the FETI can lead to the proper orthochronous LT, and both are preserved for the GT. This is the main contribution of this work. Additionally, as has been known for a long time, we demonstrate that the second postulate can be obtained by using the velocity reciprocity property [9,10]. Moreover, the necessary condition for physical causality is shown to be a deductive consequence of this symmetry principle.

2. Derivation of the Lorentz Transformation

There are several interesting points to note from the above derivation of the LT. First, using the symmetrized form of the transformation and the symmetry principle, all of the mathematical formulas are essentially symmetric. This clearly gives some aesthetic satisfaction; second, this formulation demonstrates that the second postulate is not at all necessary to be assumed a priori [31,32,33,34,35,36,37]. The velocity reciprocity property alone leads to the constancy of the speed of light. This may justify the numerous studies re-deriving the LT by dispensing with the second postulate. On the other hand, if we did use Einstein’s second postulate, Equation (5), together with Equations (1)–(3), it suffices to obtain the LT while the velocity reciprocity property, Equation (4), now becomes a deduction. However, in this way, we could not see that the existence of an invariant quantity with a dimension of speed is related to the space isotropy. As has been constantly criticized by others, the (experimentally found) constancy of light-speed is just an exhibition of the nature of space–time, but not a special property of any specific theory such as electrodynamics. It just happens that light is propagating in vacuum in this specific speed; third, the FESI or the FETI symmetry principle replaces the group assumption of the transformation in determining the functional form of the transformation parameters. The resulting LT is proper and orthochronous, and thus forms a group post priori. Finally, the necessary condition of c being a limiting velocity for the physical requirement of causality can be obtained without resorting to auxiliary postulates. It is simply the result of the requirement of the transformation parameters being real numbers.
Other similar space–time operations result in either trivial transformations or improper and/or non-orthochronous LTs, which do not form groups [38]. For example, the following operations: lead to the trivial transformation, , while the following operations: result in improper and/or non-orthochronous LTs. Field [25] was able to derive the proper orthochronous LT using the space–time exchange (STE); , (for completeness, the operation of , , termed STE’, is also a proper choice, although it was not discussed in the paper). Notice that these operations are performed in the same frames, respectively. It can be seen that Equations (1) and (2) are also invariant under the STE (or the STE’) operation. However, it has been pointed out [39] that the STE symmetry is not exactly preserved for the GT, although the “broken symmetry” has its own subtleties [40,41]. On the other hand, the FESI or FETI symmetry remains to be valid at the non-relativistic limit as , as can be shown easily.
Another compact presentation which is consistent with the FESI or the FETI symmetry utilizes an involutive form of the transformation [42,43,44]. Starting with a change of sign of the spatial coordinate in K only; , Equations (1) and (2) read: and: respectively. If one now assumes that the above equations are involutive; namely, they are invariant under the operations and , one obtains Equation (5). Unfortunately, the resulting LT is an improper orthochronous LT, and the symmetry is not preserved for the GT (for completeness, if one starts with in K only and assumes the transformation equations are involutive, one obtains yet another improper orthochronous LT). To obtain the physically acceptable proper orthochronous LT, one has to reverse the sign of x (in K only) post priori, thus making the whole methodology ad hoc. Although this involutive formulation has the mathematical advantage of utilizing well-established matrix algebra (e.g., the transformation matrix is involutory), it is not suitable to be promoted to a physical principle.

In concluding this paper, among the possible discrete-type space–time symmetry operations studied herein which leave the coordinate transformation between two inertial frames formally similar to the LT, we have found that only the FESI or the FETI satisfies the following two requirements: (1) the final resulting LT is proper and orthochronous and thus forms a group; and (2) the symmetry remains to be valid at the non-relativistic limit. We demonstrate the utility of the revealed symmetry principle through a derivation of the LT which closely follows the logic of Einstein in 1916. The mathematical requirement of the group property for the space–time transformation is not assumed a priori, but becomes a natural result due to the intrinsic symmetry principle of space–time. 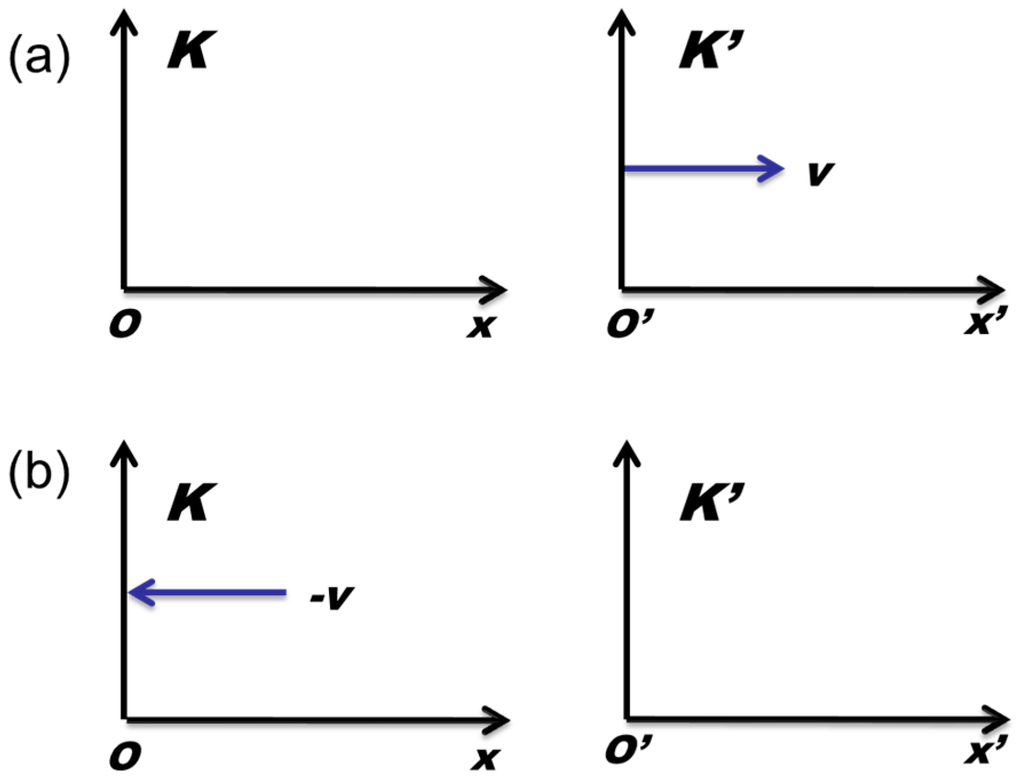