Physics of the Chemical Asymmetry of the Cell Membrane: Implications in Gene Regulation and Pharmacology
Previous Article in Journal

We briefly outline the discrete Walsh analysis here (Figure 1). For details of the mathematical procedures, see previous studies [3,4,6]. The Walsh function of order and argument can be represented over the interval as follows: where , , and is the smallest positive integer such that . Dyadic addition of non-negative integers r and s is defined as , where and . Consequently, the product of the two Walsh functions is given by . From this calculation, the Walsh function can be shown to form an orthonormal set. In this case, we can define a Walsh transform, similar to a Fourier transform. 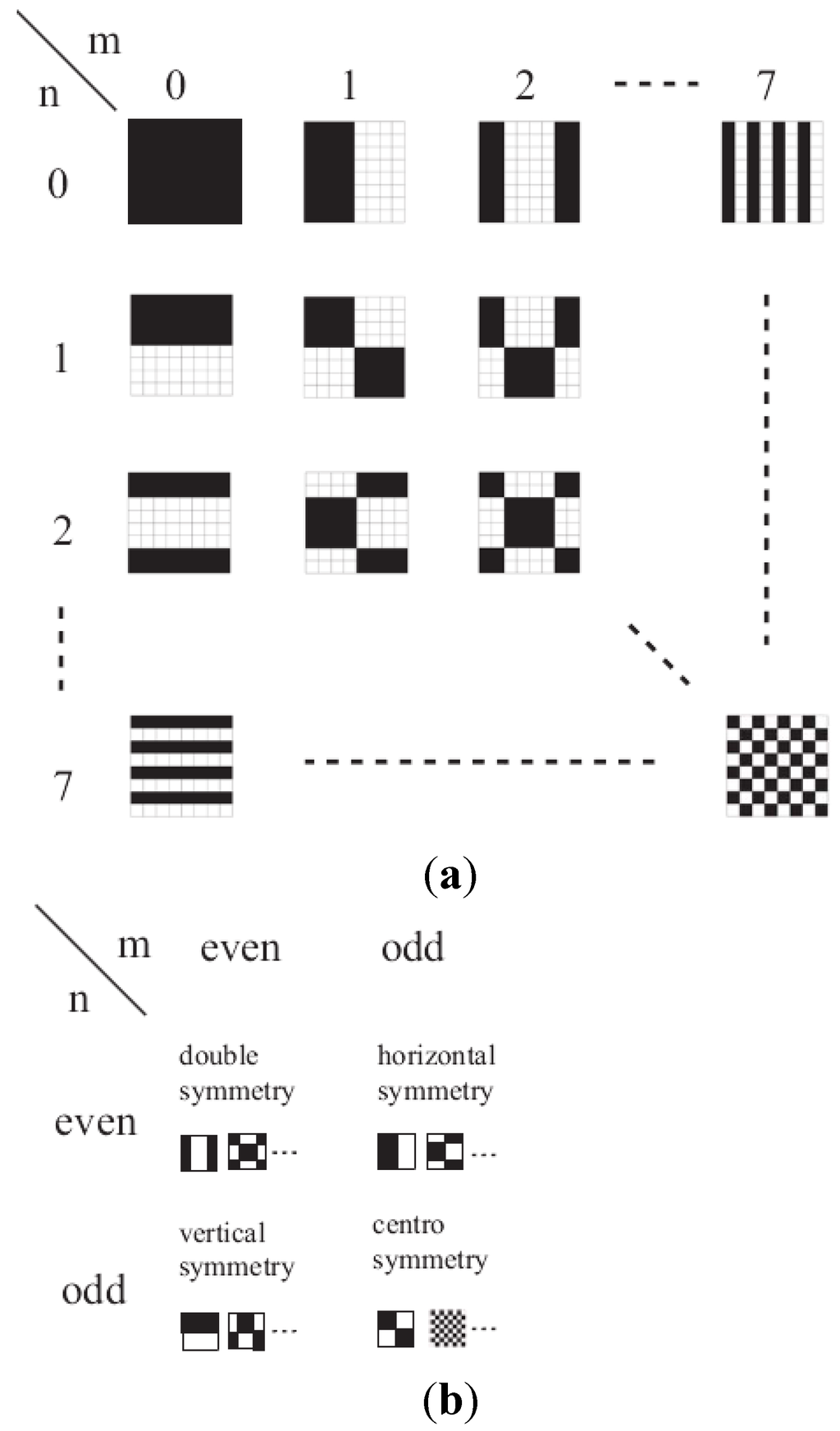 The two-dimensional discrete Walsh function can be represented in matrix form as , where is the amount of the (m,n)th -order Walsh function in the ith row cell in the jth column.
This pattern can be written as , where is the amount of the gray level in the row cell in the jth column and If just two gray levels exist, for example, “black” and “white”, then is typically represented by 1 and 0, respectively (Figure 1a). The two-dimensional discrete Walsh transform of the pattern is given by: where The functions and are the two-dimensional Walsh spectrum and power spectrum, respectively.
The Walsh power spectrum can be normalized as follows: where . In this case, we obtain: where the sum is taken over all ordered pairs for , except for .
The spatial pattern is considered as an information source, consisting of dot patterns. The dot patterns emitted from the source are assumed to occur with the corresponding probabilities given by Equation (4).
Next, we consider the information entropy resulting from the symmetry of the pattern. Because the two-dimensional Walsh functions can be easily divided into four types of symmetry (Figure 1b), Equation (4) can be rewritten as: where vertical symmetric component: horizontal symmetric component: centro symmetric component: and double symmetric component:
When the spatial pattern is regarded as an information source consisting of four types of symmetry, the corresponding probabilities are given by Equations (6)–(9). Applying the entropy function from information theory to these four symmetric components, we obtain:
As shown in Equations (5) and (10), ranges from 0 to 2 bits. Since this entropy relates to the symmetry, it is called the “symmetropy” [6]. The symmetropy can be considered as a quantitative and objective measure of symmetry. If the amount of a certain component is larger than the amounts of the other three components, then the pattern is rich in symmetry related to the particular component. In this case, Equation (10) shows that decreases. Conversely, if the amounts of the four components are almost equal to one another, then the pattern is poor in symmetry, and increases. Previous studies have concentrated on symmetry [4]. Following this idea, in this study, we measured the symmetry of the initial condition and the final pattern to examine the effects on final patterns of the initial condition of symmetry in CA patterns.

For simplicity, this paper uses only “classical” CAs according to the Wolfram classification [7]; that is, the one-dimensional legal CA that obeys the 32 possible legal totalistic rules. The totalistic rules involve nearest and next nearest neighbors, and each cell has two possible colors: white (0) or black (1). In addition, because the total number of neighborhoods of five cells is equal to 25, we can obtain the 32 possible legal totalistic rules. Wolfram [7,8] discovered that, although the patterns obtained with different rules differed in detail, they appeared to fall into four qualitative classes: 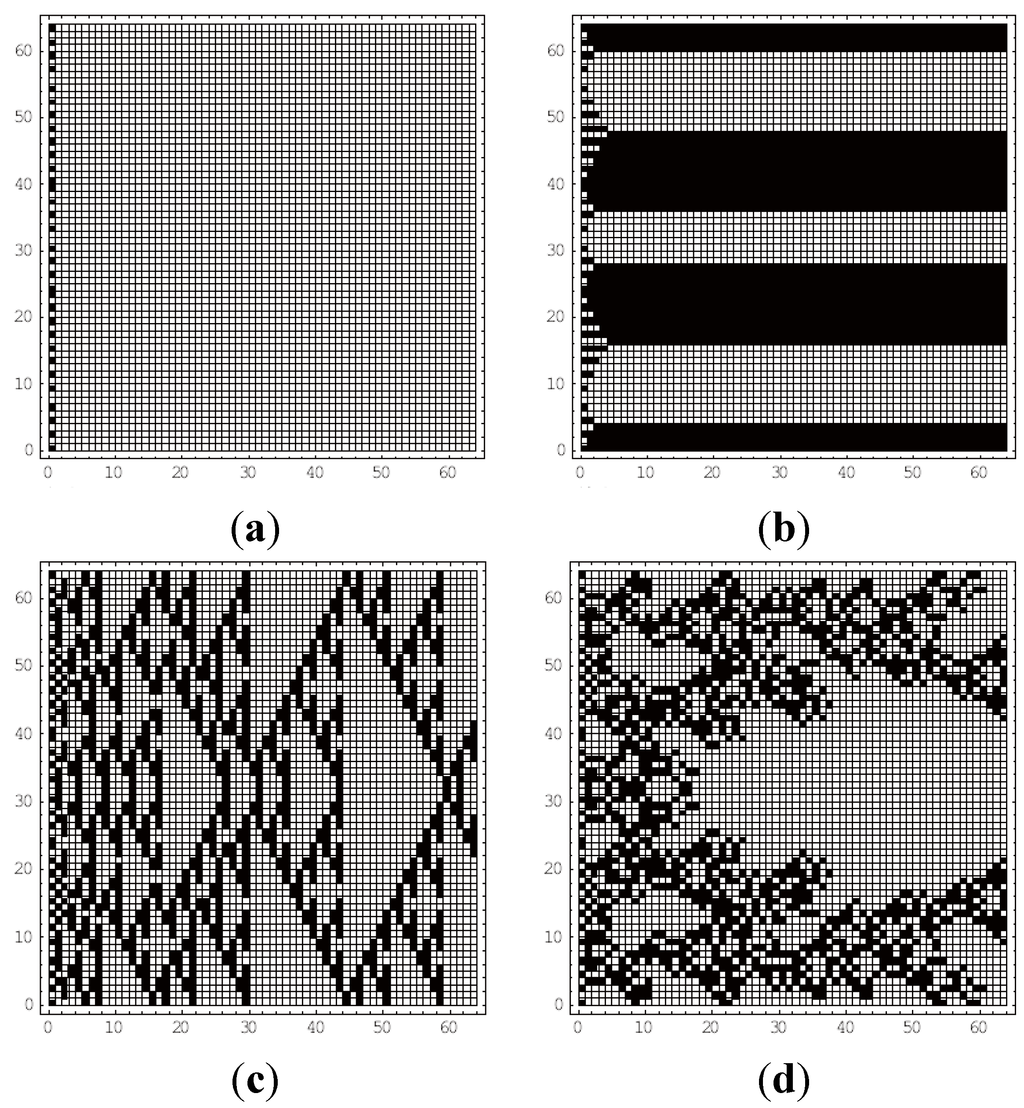 In this paper, we do not use all codes in class I because the patterns are trivial. We measure the initial condition (26 × 1) and the final pattern. The number of cells is 26 × 26 because, to measure the number of symmetries, this number of cells is the minimum needed [4]. In the present study, we can use only two kinds of initial condition, horizontal symmetry and double symmetry, because we consider n = 2 in the discrete Walsh function Wmn (as in Figure 3).

4.3. The Ratio of Final Formation

For all classes, the amount of symmetry for is larger than that for , and the final pattern formations of have a higher hierarchy than ; in contrast, the final pattern formations of had more broken regularity than (Figure 5c,d). This result is interpreted as the double symmetry having a higher amount of symmetry than the horizontal symmetry, because has an axis of symmetry with space and time, whereas has an axis of symmetry with time alone.
From the measurement of symmetropy, developed pattern formations of and have many types of symmetries that predominate as time passes. This result corresponds to the viewpoint of the Curie Symmetry Principle [4]. In contrast, the developed pattern formations of show a situation in which one type of symmetry was predominant as time passed [4]; this result does not correspond to the viewpoint of the Curie Symmetry Principle [4]. Here, it is shown that the theoretical process of pattern formation reduced entropy and increased specific symmetry [4,5]; however, this process has been examined only from [4,5]. In this study, the final pattern formations from regular initial conditions did not reduce entropy and increased specific symmetry. Thus, the Curie Symmetry Principle cannot be used to evaluate the proxy of pattern formation.
The final pattern formation of is composed of the same scale forms, to stand in a line (Figure 5a,b). The pattern formations are supposed to be affected by “iteration” of the base rules of CAs, and this result is correlated with the previous studies, such as [9] that shows that the Walsh transform allows one to compute the correlation between the inputs and the outputs of the iterations of a cellular automaton. Generally, as systems are put under greater stress, the observed states lose symmetry and gain in complexity (both spatial and temporal). However, as the systems are further stressed, states with more symmetries and more structures appear. Moreover, symmetries and chaos—patterns and disorder—can coexist naturally within the same simple mathematical framework [10]. In this study, the natural coexistence of symmetry and chaos (iteration of CAs) is found in the final pattern formation of ; this means a simple mathematical framework of a one-dimensional legal cellular automata. Complicated structure pattern formations are developed by a simple model; thus, the quantity of information needed to describe an object may be more than that needed to prescribe it. Thus, under an initial condition of strong regularity, theoretical phenomena revealed occurrences of iterations with regularity, and the concepts of the theoretical phenomena could be helpful to interpret the process and the circumstance of biological patterns with higher-complexity structures.

5.3. The Ratio of Final Formation

We would like to give thanks to Masayuki Hyodo, Kazuhito Yamasaki, Takao Ubukata, Sunao Mochizuki and Yusuke Seto for valuable discussions and advices on the manuscript. This work was financially supported by a grant from the Japan Society for the Promotion of Science awarded to IT (15J00351).

The authors declares no conflict of interest.