Conservation Laws and Exact Solutions of a Generalized Zakharov–Kuznetsov Equation

: In this paper, we study a generalized Zakharov–Kuznetsov equation in three variables, which has applications in the nonlinear development of ion-acoustic waves in a magnetized plasma. Conservation laws for this equation are constructed for the first time by using the new conservation theorem of Ibragimov. Furthermore, new exact solutions are obtained by employing the Lie symmetry method along with the simplest equation method.
Keywords:
generalized Zakharov–Kuznetsov equation; conservation laws; exact solutions; simplest equation method

Many important phenomena and dynamic processes in physics, applied mathematics and engineering can be described by higher-dimensional extensions of the Korteweg–de Vries (KdV) equation. Zakharov and Kuznetsov successfully proposed one such model [1]. The Zakharov–Kuznetsov (ZK) equation given by:

is one of the known two-dimensional generalizations of the KdV equation studied in the literature. The ZK equation governs the behavior of weakly nonlinear ion-acoustic waves in a plasma comprising cold ions and hot isothermal electrons in the presence of a uniform magnetic field [1–3]. In [4,5], Wazwaz used the extended tanh method and the sine-cosine ansatz to find solitons and periodic solutions for (1). Moussa [6] also obtained some similarity solutions by using the symmetry group method. Equation (1) was also studied, amongst others, by Peng [7], and he obtained abundant periodic wave solutions using the extended mapping method.

This paper aims to study the generalized Zakharov–Kuznetsov (gZK) equation [4,8]:

where α, β and n are nonzero arbitrary constants and u = u(t, x, y). In [4], the extended tanh method was employed, and solitons and periodic solutions were derived for (2), which may be helpful to describe wave features in plasma physics. The Cole–Hopf transformation and the first integral technique were used in [8] to obtain complex solutions for Equation (2).

It is of great importance to search for exact solutions of nonlinear partial differential equations (NPDEs), such as the gZK equation, because many physical phenomena are described by NPDEs. Although there is no unique method for finding exact solutions of NLPEs, a great deal of research work has been devoted to developing different methods to solve NLPEs. Some of the methods found in the literature include the inverse scattering transform method [9], Darboux transformation [10], Hirota’s bilinear method [11], Bäcklund transformation [12], the multiple exp-function method [13], the (G′/G)-expansion method [14], the sine-cosine method [15], the F -expansion method [16], the exp-function expansion method [17] and the Lie symmetry method [18,19].

The paper is organized as follows: In Section 2, we derive conservation laws of (2) by employing the new conservation law theorem by Ibragimov [32]. In Section 3, we obtain exact solutions of (2) using Lie symmetry analysis and the simplest equation method [33–35]. Finally, concluding remarks are presented in Section 4.

is a Lie point symmetry of (2) if: on Equation (2). Expanding Equation (3) and then splitting on the derivatives of u, we obtain the following overdetermined system of linear partial differential equations:

Solving the above system of partial differential equations, one obtains the following four Lie point symmetries:

2.2. Application of the New Conservation Theorem

The gZK equation together with its adjoint equation are given by:

The third-order Lagrangian for the system of Equations (3a) and (3b) is given by:

which can be reduced to the second-order Lagrangian:

We have the following four cases:

In this section, we obtain exact solutions of (2) using firstly its Lie point symmetries and, secondly, by employing the simplest equation method.

First of all, we utilize the linear combination of the three translation symmetries, namely X = X1 + νX2 + X3, and reduce the gZK Equation (2) to a PDE in two independent variables. The associated Lagrange system is:

which yields the following three invariants:

which is a nonlinear PDE in two independent variables. Further symmetry reduction of (7) can be done by using its symmetries. Equation (7) has the two translational symmetries, viz.,

The combination Γ1 + kΓ2, of the two symmetries Γ1 and Γ2, for an arbitrary constant k, yields the two invariants:

which gives rise to a group invariant solution W = W (z). Consequently, using these invariants, (7) is transformed into the third-order nonlinear ODE:

The integration of (8) yields

where the constant of integration has been taken to be zero, because we are looking for soliton solutions. Equation (9) can be integrated easily by first multiplying it by W′. We then obtain the first-order variables separable equation: which can be integrated easily. After integrating and reverting back to the original variables, we obtain the following group-invariant solution of the gZK Equation (2) for arbitrary values of n in the form: where

and the Riccati equation: where a, b and c are constants [36]. We look for solutions of the nonlinear ODE (8) that are of the form: where G(z) satisfies the Bernoulli equation or Riccati equation, M is a positive integer that can be determined by a balancing procedure and A0,…, AM are parameters to be determined.

The solution of Bernoulli Equation (12) we use here is given by:

3.2.1. Solutions of (2) Using the Bernoulli Equation as the Simplest Equation

In this case, the balancing procedure yields M = 2 and solutions of (8) are of the form:

We insert this value of W (z) in (8). Then, using the Bernoulli Equation (12) and, thereafter, equating the coefficients of powers of Gi to zero, we obtain an algebraic system of five equations in terms of A0, A1, A2, namely:

With the aid of Maple, we solve the above system and obtain:

The balancing procedure yields M = 1, so the solutions of (8) take the form:

As before, substituting (17) into (8), we obtain the algebraic system of equations:

3.2.2. Solutions of (2) Using the Riccati Equation as the Simplest Equation

The insertion of this value of W (z) into (8) and making use of the Riccati Equation (13) yields the following algebraic system of equations in terms of A0, A1, A2:

The solution of the above system using Maple gives:

Consequently, the solutions of (2) are:

The balancing procedure yields M = 1, so the solutions of (8) are of the form:

Substituting (22) into (8) and using the Riccati equation [36], we obtain the following algebraic system of equations:

Solving the above algebraic equations, one obtains:

In this paper, we studied the generalized Zakharov–Kuznetsov Equation (2). We derived the conservation laws of this equation by using the new conservation theorem by Ibragimov. Moreover, the Lie point symmetries of (2) were obtained and were used in conjunction with the simplest equation method to obtain exact solutions of the generalized Zakharov–Kuznetsov equation. The solutions obtained here are new and more general than the ones obtained before in [4] and [8]. Furthermore, the importance of the conservation laws has been emphasized in the Introduction.

D.M.M. would like to thank the FRC of Faculty of Agriculture, Science and Technology, North-West University, Mafikeng Campus, and NRF of South Africa for their financial support. D.M.M. and C.M.K. thank Tanki Motsepa for helpful discussions.

D.M.M. and C.M.K. worked together in the derivation of the mathematical results. Both authors read and approved the final manuscript. 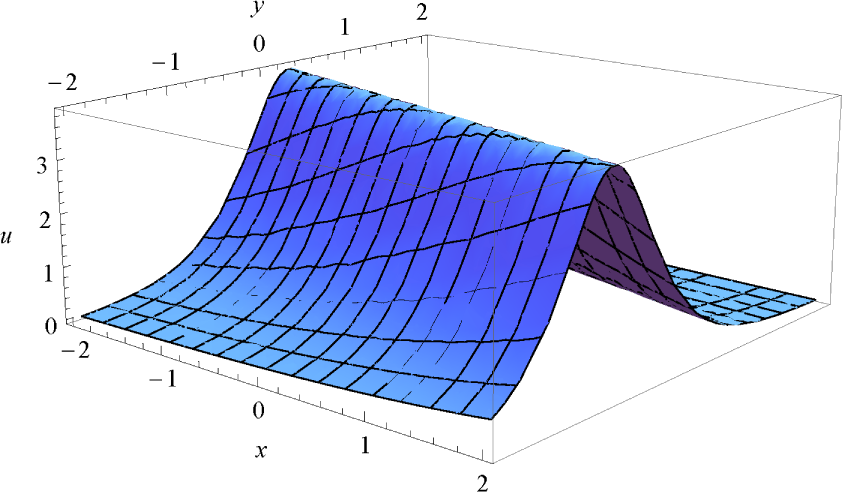 © 2015 by the authors; licensee MDPI, Basel, Switzerland This article is an open access article distributed under the terms and conditions of the Creative Commons Attribution license (http://creativecommons.org/licenses/by/4.0/).