A Hybrid Mechanism for Helicopters

Research on Spectrum Optimization Technology for a Wireless Communication System

:
In this study, the principle of minimum spectral energy leakage is applied, and the mathematical model is also established by the general function through adding different constraints. To allow the target baseband signal to have a high-quality time-domain representation, it is assumed that the baseband signal is an even function. The time-domain waveform has symmetry about the y-axis, and the objective function is obtained by Fourier series approximation. The frequency-domain characteristics of the baseband signals are obtained by adding the energy limitation condition and the boundary restriction condition. Limit a point at the appropriate position of the main lobe of the normalized energy spectral density function, and at the same time, limit the appropriate point at the first side lobe. The changes of the points modified the whole characteristic of the frequency-domain. To more conveniently compare the characteristics of the signal under different constraints, according to the symmetry of the frequency-domain of the signal, the normalized energy spectrum main lobe energy ratio is defined as a parameter, and thereby the spectral performance of the signal is discriminated by the size of this parameter. Through comparative analysis, the signal with the frequency-domain restriction conditions added has a larger normalized energy spectrum main lobe energy ratio. With increasing roll-off factor n, the energy ratio of the main energy spectrum of the normalized spectrum increases accordingly, i.e., the energy leakage is effectively suppressed. The baseband signal can be considered more suitable as a modern wireless communication system and can be obtained by adding a suitable restriction condition and establishing a model with a general function.
Keywords:
baseband signal; optimization method; spectrum limiting method; normalized main lobe energy ratio; spectral efficiency

Wireless communication technology has been advancing at an immense pace with the rapid development of science, technology, and civilization. This technology has seen numerous advances, bringing more convenience to people’s production and lifestyle; however, at the same time, its development is still facing great challenges. One of the main problems is the increasing strain on the wireless spectrum resources. Therefore, many novel schemes have been put forth to address this problem. One of the representative schemes starts with the modulation method [1,2,3,4,5]. The purpose of this method is to use modulation to improve the transmission rate of the communication system and reduce the energy leakage of the frequency band. Typical representative is the orthogonal frequency division multiplexing (OFDM) technique [6,7,8,9]. Mesleh et al. proposed that spatial modulation technology should be applied to OFDM as a multi-antenna transmission technique, and that multiple-input multiple-output (MIMO) technology is used to effectively improve the spectral efficiency [10]. However, since the OFDM scheme uses a rectangular prototype filter, it is inevitable that the side lobes of the spectrum are large in the frequency-domain, thereby affecting the spectral efficiency. Based on the requirement of efficient use of spectrum performance, modulation techniques such as generalized frequency division multiplexing (GFDM) and filter bank multi-carrier (FBMC) were proposed for 5G technology [11,12,13,14,15,16]. Michailow et al. proposed the GFDM modulation method, which no longer uses a single prototype filter, by using a richer Nyquist filter bank to generate baseband signal waveform. This technique effectively lowers the out-of-band power leakage level than the out-of-band power leakage of the OFDM systems [17]. The FBMC technology is designed for the filter bank in order for much possible energy to be concentrated on the main lobe, improving the spectral efficiency [18,19,20,21].
This paper aims to solve the target baseband signal by adding different constraints and establishing a general function model using the principle of minimum spectral energy leakage. The target baseband signal is set as an even function to have a high-quality time-domain representation, and the time-domain waveform is symmetrical about the y-axis. The objective function is obtained by Fourier series approximation. With the continuous development of wireless communication and more demanding requirement of frequency spectrum, the signal obtained with only energy and boundary restrictions has relatively excellent spectrum properties in the frequency-domain. After adding the frequency-domain restriction condition, the baseband signal with high-quality characteristics is obtained by MATLAB software and compared to the baseband signal obtained under the original conditions. To conveniently compare the characteristics of the signal under different constraints based on the symmetry of the frequency-domain of the signal, the normalized energy spectrum main lobe energy ratio is defined as a parameter, and the spectral performance of the signal depends on the size of this parameter. Using contrast analysis, the signal with the frequency-domain constraint added has a larger normalized energy spectrum main lobe energy ratio. With increasing roll-off factor n, the energy ratio of the main energy spectrum of the normalized spectrum increases accordingly. The baseband signal is more suitable as a modern wireless communication system and can be obtained just by adding a suitable restriction condition and establishing a model with a general function.

To obtain better spectrum use with the baseband signals, the general function model is constructed using the principle of minimum spectral energy leakage and it can be expressed as follows [22]:In Equation (1), define as the roll-off convergence function of the spectral density of the target signal, and is defined as the energy spectrum density of the target signal. The target signal has a length of T in the time-domain, and is set as an even function. Thus, the frequency-domain function obtained by the Fourier transform of will not have an imaginary part. Thus, is expressed as follows:Obviously, is a rising function about the y-axis symmetry, and n depends on the spectral energy leakage of the target signal has. To obtain an accurate integration result by using Equation (1), the energy spectral density of is required to have a roll-off speed faster than the rising speed, thus achieving the goal of limiting the target signal to have a specific falling speed in the frequency-domain.
By applying the Taylor series expansion method, the even function property of the impulse signal , and the inverse Fourier transform, Equation (1) can be written as follows: Thus, (1) can be written as follows: where is the -order derivative of .
Equation (3) shows that the initial problem can be transformed into the problem of solving the target signal when the minimum value of J is taken according to the minimum spectral energy leakage principle.

3. Limitations of the General Function Model

4. Solution and Analysis of Signal with High-Quality Spectrum Characteristics

4.4. Comparative Analysis of Spectral Characteristics under Different Constraints at n = 2

For the same value of roll-off factor n and different m values, the frequency-domain main lobe energy ratio of the signal under different constraints and the spectral bandwidth calculated by −40 dB and −60 dB are compared and analyzed at n = 2, and m = 5, 6, and 7. The relevant data obtained in the absence and presence of the frequency-domain restriction condition are shown in Table 5 and Table 6, respectively.
Table 5 and Table 6 show that with increasing frequency-domain conditions, the spectral efficiency of the normalized energy spectrum main lobe energy ratio, or the −40 dB spectral bandwidth and the −60 dB spectral bandwidth improved significantly. For different wireless communication systems, the appropriate baseband signals can be selected by adding different constraints to achieve different communication requirements.

M.L. did the mathematical modeling and the simulations. He also wrote the draft of the paper. B.L. and P.J. contributed to the revisions and the discussion of the results. W.X. and S.B.M. put forward the idea and checked the simulation of this paper. All authors have read and agreed to the published version of the manuscript. 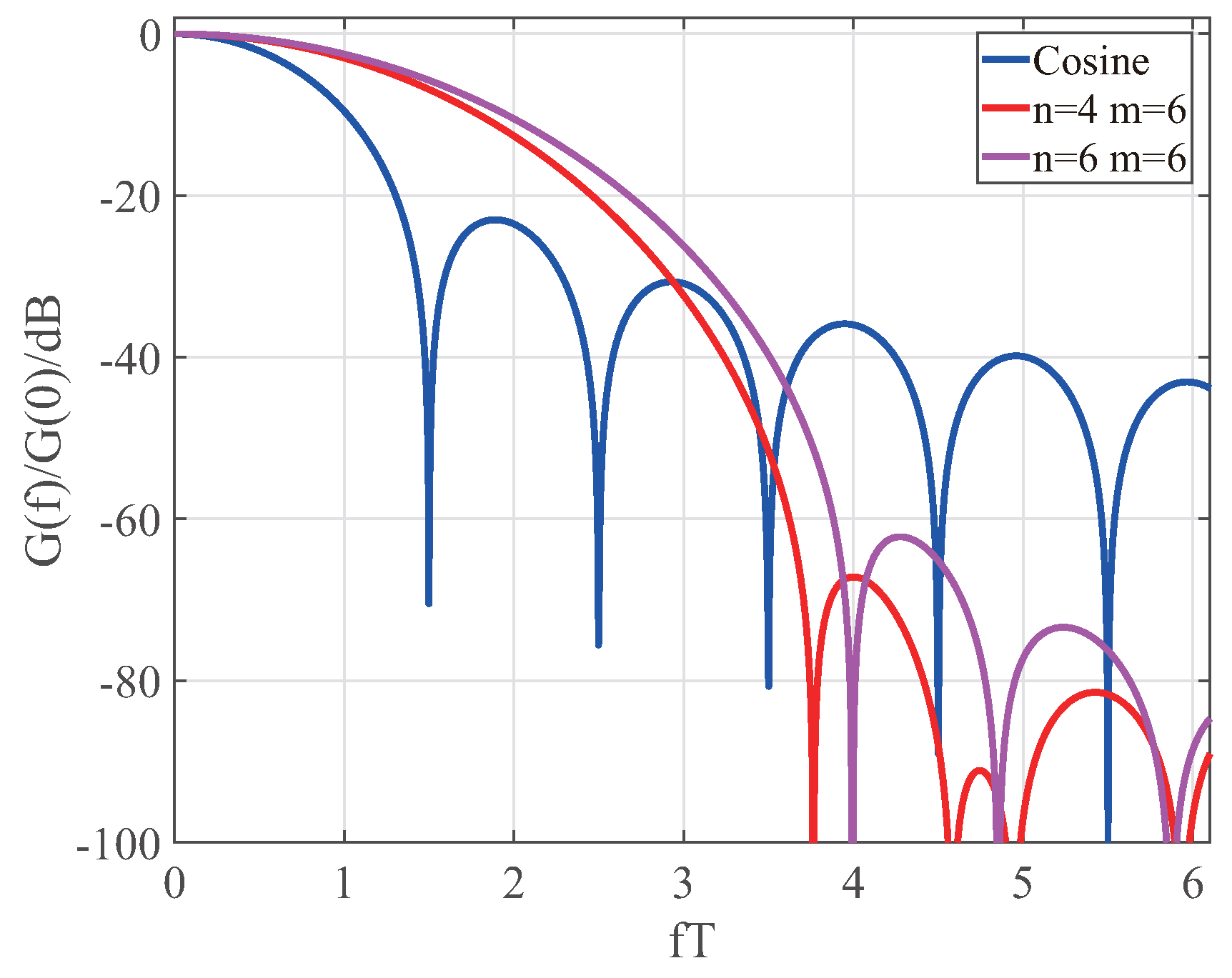