We evaluated the performance of NCC and ZNCC with and without using the modification. We evaluated the performance of NCC, ImpNCC, ZNCC, and ImpZNCC directly from the corresponding disparity space image using a winner-take-all strategy. Denote ImpNCC/R1 as a matching cost function that uses ImpNCC with to construct .
Figure 2 shows the results of the ImpZNCC matching cost functions with different R values using the Motorcycle stereo images. Figure 2a,b show the left and right images, whereas the ground truth of the left image is shown in Figure 2c. Disparity maps of ZNCC, ImpZNCC/R1, and ImpZNCC/R1 are shown in Figure 2d–f, respectively. ZNCC produced the most erroneous disparity maps with an average error rate of 49.02% because ZNCC ignores the imperfect rectification problem. ImpZNCC/R1 and ImpZNCC/R2 reduced the error rates with average error rates of 43.73% and 43.64%, respectively.
Table 6 and Table 7 show the quantitative results of the NCC, ImpNCC, ZNCC, and ImpZNCC matching functions, respectively. Using the modification, NCC had the worst performance when producing more erroneous disparity maps than ImpNCC/R1 and ImpNCC/R2. Similarly, the awareness of high resolution images improved the performance of ImpZNCC/R1 and ImpZNCC/R2, which were superior to ZNCC for all of the test stereo pairs.

In order to measure the computation times of the matching cost functions, we used the Bicycle stereo images with a resolution of and a disparity range of 180. We experimentally investigated the matching cost functions, including ImpCensus, ImpRank, ImpAD, ImpSD, ImpNCC, and ImpZNCC, with , , and , respectively. The experimental PC platform had a configuration consisting of an Intel core i7, a 4.00 GHz CPU, and 16.00 GB of memory. Table 11 shows the computation times that are needed for the test matching cost functions to compute the disparity space image . The testing algorithms requires more computation time when the expansion factor R increases.
As shown in the above tables, methods with the expansion range clearly reduce the error rates of their original versions. However, methods with performed comparable or marginally better than those with .
In addition, we further evaluated performance of the proposed local stereo matching methods for and using the imperfectly rectified stereo images of the Middlebury dataset, as shown in Table 12. Increasing value for the parameter range R had the negative effects and increase error rates. Therefore, generally, shows to be the best appropriate value.
Let be image size and D be disparity range. AD and SD are pixel-wise method, so their computational complexities are . Rank and Census are window-based cost functions that each matching cost is computed for windows W. For each window pairs, Rank accumulates values of relative order between center pixel and its neighbors. Therefore, Rank computational complexity is . Census encodes relative orders into a bit string and then compute a matching cost by comparing differences between two strings. Therefore, Census computational complexity is .
The proposed cost functions with the parameter range R requires to process pixels in the right images for each pixel in the left image. Therefore, the computational complexities for ImpAD and ImpSD are , and for ImpCensus and ImpRank are .

Both authors contributed equally to this work and have read and approved the final manuscript. 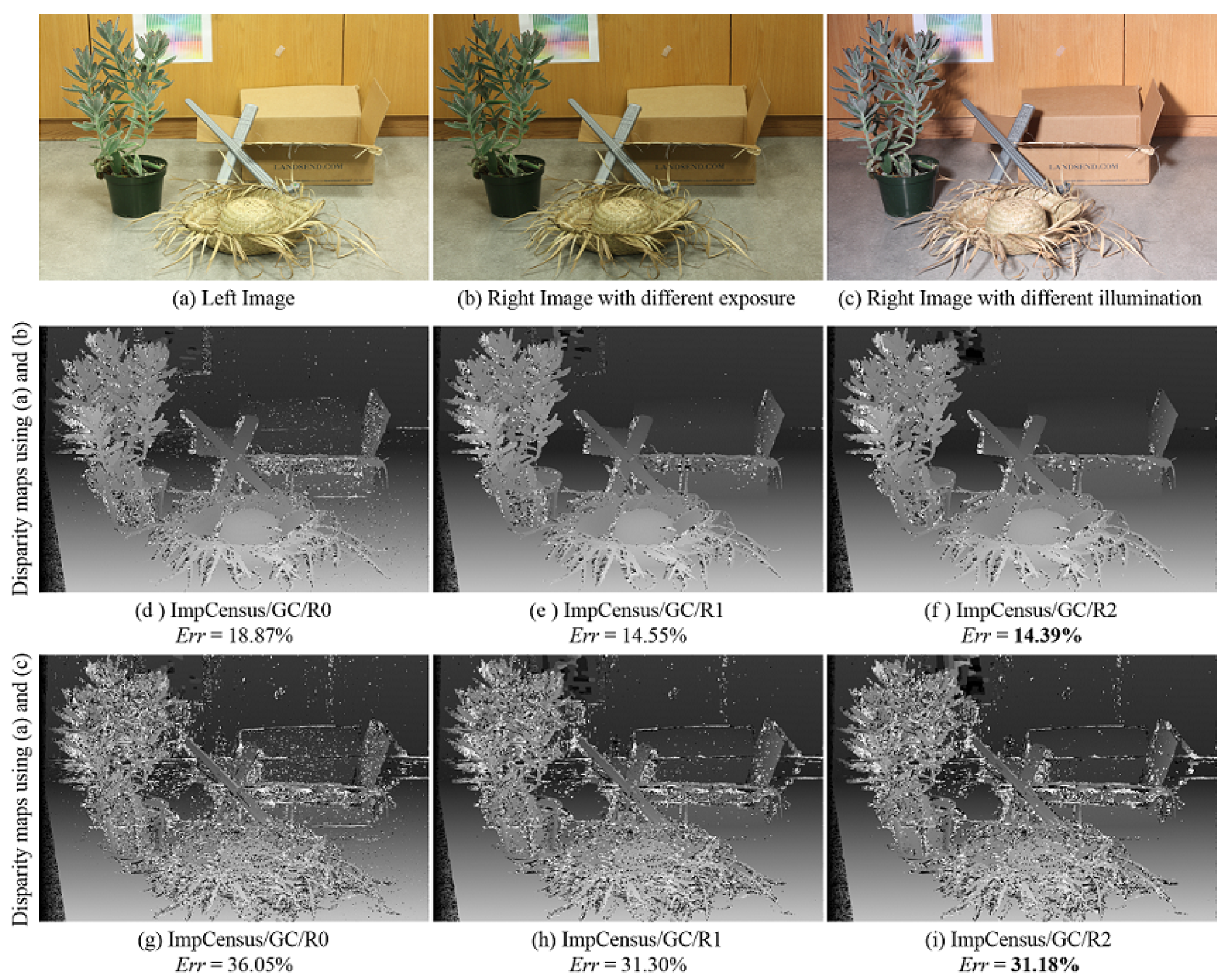