This paper studies control strategies for adaptive cruise control (ACC) systems in battery electric vehicles (BEVs). A hierarchical control structure is adopted for the ACC system, and the structure contains an upper controller and a lower controller. This paper focuses on the upper controller. In the upper controller, model predictive control (MPC) is applied for optimizing multiple objectives in the car-following process. In addition, multiple objectives, including safety, tracking, comfort, and energy economy, can be transformed into a symmetric objective function with constraints in MPC. In the objective function, the corresponding weight matrix for the optimization of multiple objectives is implemented in symmetric form to reduce the computational complexity. The weights in the weight matrix are usually set to be constant. However, the motion states of the own vehicle and the front vehicle change with respect to time during a car-following process, resulting in variation of the driving conditions. MPCs with constant weights do not adapt well to changes in driving conditions, which limits the performance of the ACC system. Therefore, a strategy for weight adjustment is proposed in order to improve the tracking performance, in which some weights in MPC can be adjusted according to the relative velocity of two vehicles in real time. The simulation experiments are carried out to demonstrate the effectiveness of the strategy for weight adjustment. Based on achieving the other control objectives, the ACC system with the weight adjustment has better tracking performance than the ACC system with the constant weight. While the tracking is improved, the energy economy is also improved. View Full-Text
Keywords: battery electric vehicle (BEV); adaptive cruise control (ACC); model predictive control (MPC); weight adjustment; tracking battery electric vehicle (BEV); adaptive cruise control (ACC); model predictive control (MPC); weight adjustment; tracking
►▼ Show Figures 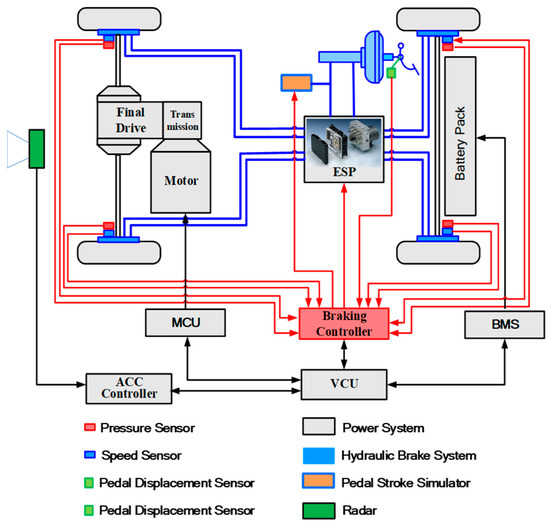