Single-Domain Antibodies and Their Formatting to Combat Viral Infections

Since their discovery in the 1990s, single-domain antibodies (VHHs), also known as Nanobodies®, have changed the landscape of affinity reagents. The outstanding solubility, stability, and specificity of VHHs, as well as their small size, ease of production and formatting flexibility favor VHHs over conventional antibody formats for many applications. The exceptional ease by which it is possible to fuse VHHs with different molecular modules has been particularly explored in the context of viral infections. In this review, we focus on VHH formats that have been developed to combat viruses including influenza viruses, human immunodeficiency virus-1 (HIV-1), and human respiratory syncytial virus (RSV). Such formats may significantly increase the affinity, half-life, breadth of protection of an antiviral VHH and reduce the risk of viral escape. In addition, VHHs can be equipped with effector functions, for example to guide components of the immune system with high precision to sites of viral infection. View Full-Text
Keywords: virus; nanobody; formatting; Fc-domain; half-life virus; nanobody; formatting; Fc-domain; half-life
►▼ Show Figures 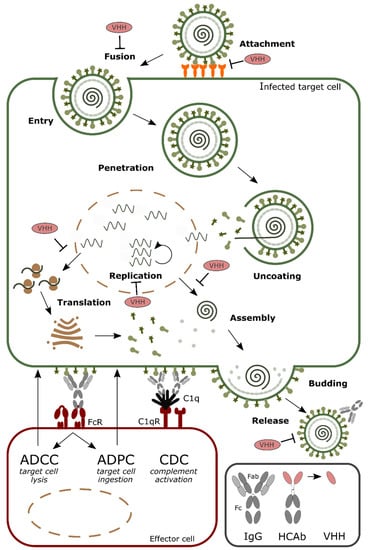