Host Cell Proteins in Biologics Manufacturing: The Good, the Bad, and the Ugly

:
Significant progress in the manufacturing of biopharmaceuticals has been made by increasing the overall titers in the USP (upstream processing) titers without raising the cost of the USP. In addition, the development of platform processes led to a higher process robustness. Despite or even due to those achievements, novel challenges are in sight. The higher upstream titers created more complex impurity profiles, both in mass and composition, demanding higher separation capacities and selectivity in downstream processing (DSP). This creates a major shift of costs from USP to DSP. In order to solve this issue, USP and DSP integration approaches can be developed and used for overall process optimization. This study focuses on the characterization and classification of host cell proteins (HCPs) in each unit operation of the DSP (i.e., aqueous two-phase extraction, integrated countercurrent chromatography). The results create a data-driven feedback to the USP, which will serve for media and process optimizations in order to reduce, or even eliminate nascent critical HCPs. This will improve separation efficiency and may lead to a quantitative process understanding. Different HCP species were classified by stringent criteria with regard to DSP separation parameters into “The Good, the Bad, and the Ugly” in terms of pI and MW using 2D-PAGE analysis depending on their positions on the gels. Those spots were identified using LC-MS/MS analysis. HCPs, which are especially difficult to remove and persistent throughout the DSP (i.e., “Bad” or “Ugly”), have to be evaluated by their ability to be separated. In this approach, HCPs, considered “Ugly,” represent proteins with a MW larger than 15 kDa and a pI between 7.30 and 9.30. “Bad” HCPs can likewise be classified using MW (>15 kDa) and pI (4.75–7.30 and 9.30–10.00). HCPs with a MW smaller than 15 kDa and a pI lower than 4.75 and higher than 10.00 are classified as “Good” since their physicochemical properties differ significantly from the product. In order to evaluate this classification scheme, it is of utmost importance to use orthogonal analytical methods such as IEX, HIC, and SEC.
Keywords:
upstream; downstream; host cell protein; CHO; ATPE; iCCC

Chinese hamster ovary cells (CHO DG44) were used for the production of a monoclonal antibody. The culture conditions were 37 °C, 5% carbon dioxide, and 130 rpm. The cultivations were carried out in shake flasks in a serum-free medium.
The ATP system applied consisted of 44.5% broth, 15.5% PEG400 (Merck KGaA, Darmstadt, Germany), and 40% of a 40 wt% phosphate buffer. All the components were weighed. The extraction was carried out at pH 6.0 in 50-mL beakers at room temperature. The system was mixed for 15 min at 140 rpm in an incubator shaker. Phase separation took place within 30 min in a separatory funnel.
The broth was diafiltrated using a SARTOFLOW® Slice 200 Benchtop system from Sartorius Stedim (Germany). A 10 kDa Hydrosart® (Sartorius Stedim, Göttingen, Germany) was utilized as a membrane module.
The iCCC (integrated counter-current chromatography) is run by using Fractogel® EMD SO3−(s) and Fractogel® EMD Phenyl(s) (Merck KGaA, Darmstadt, Germany). The buffers consisted of a 20 mM sodium phosphate buffer (Na2HPO4, NaH2PO4) as well as a 20 mM sodium phosphate buffer with 1 M Na2SO4.
The product was quantified by Protein A chromatography (PA ID Sensor Cartridge, Applied Biosystems, Bedford, MA, USA). Dulbecco’s PBS buffer (Sigma-Aldrich, St. Louis, MO, USA) was used as a loading buffer at pH 7.4 and as an elution buffer at pH 2.6. The absorbance was monitored at 280 nm.
The size exclusion chromatography was done by using a Yarra™ 3 µm SEC-3000 column (Phenomenex Ltd., Aschaffenburg, Germany) with 0.1 M Na2SO4, 0.1 M Na2HPO4, and 0.1 M NaH2PO4 (Merck KGaA, Germany) as a buffer system.
Isoelectric focusing was carried out using IPG strips (ReadyStripTM IPG Strips, linear, pH 3–10, BIO-RAD, Hercules, CA, USA) and an isoelectric focusing unit of Hoefer (Hoefer Inc., Holliston, MA, USA). A subsequent SDS PAGE was carried out using gels (Criterion TGX Precast Gel, 4–15% Bis-Tris, BIO-RAD), buffers, and an electrophoresis chamber from BIO-RAD. The resulting gels were colored by Coomassie Brilliant Blue G-250 (VWR International, Radnor, PA, USA).
For the identification of proteins, selected 2D GE spots were cut out and reduced into 1-mm2 pieces. After reduction of the disulfide bonds with 10 mM dl-dithiothreitol (Sigma-Aldrich) and alkylation with 50 mM iodoacetamide (Sigma-Aldrich), an in-gel proteolytic digestion was performed with 8 ng/µL trypsin (Promega, Madison, WI, USA) at 37 °C overnight. The peptides were extracted from the gel with 65% acetonitrile and 5% acetic acid in water and the solvent was evaporated to complete dryness. The peptides were re-suspended in 20 µL 0.1% formic acid (Fluka) and subjected to LC-MS/MS analysis with a nano-flow ultra-performance liquid chromatography (nano-UPLC) system (nanoACQUITY, Waters, Manchester, UK) coupled via an electrospray-ionization (ESI) source to a tandem mass spectrometer (MS/MS) consisting of a quadrupole and a orbitrap mass analyzer (Orbitrap QExcactive, Thermo Scientific, Bremen, Germany). Four microliters of each sample were loaded onto a reversed-phase (RP) trapping column (Symetry C18 Trap Column; 100 Å, 5 µm, 180 µm × 20 mm) and washed with 1% buffer B for 5 min. The peptides were eluted onto a RP capillary column (nanoAcquity Peptide BEH analytical column; 130 Å, 1.7 µm, 75 µm × 200 mm) and separated by a gradient from 3 to 35% buffer B in 35 min (250 nL/min). Eluting peptides were ionized and desorbed by ESI in the positive mode using a fused-silica emitter (I.D. 10 μm, New Objective, Woburn, MA, USA) at a capillary voltage of 1800 V. Data-dependent acquisition mode was used with the following parameters: MS level over a m/z range from 400 to 1500, with a resolution of 70,000 FWHM at m/z 200. Maximum injection time was set to 120 ms for an AGC target of 1E6. For MS/MS analysis the top 12 signals were isolated in a 2 m/z window and fragmented with a normalized HCD collision energy of 25. Fragment spectra were recorded with a resolution of 17,500 FWHM at m/z 200. Maximum injection time was set to 60 ms for an AGC target 5E5.
LC–MS raw data were processed with MaxQuant (Max Planck Institute of Biochemistry, Planegg, Germany) algorithms (version 1.5.8.3). Protein identification was carried out with Andromeda against a hamster (Cricetulus griseus) (www.uniprot.org, downloaded on 31 January 2017) and a contaminant database. The searches were performed using a precursor mass tolerance set to 10 ppm and fragment mass tolerance set to 20 ppm. For peptide identification, two missed cleavages were allowed, a carbamidomethylation on the cysteine as a fixed modification and oxidation of the methionine as a variable modification. A maximum of five modifications per peptide were allowed.

The presented approach of integrating USP and DSP is based on the classification and characterization of impurities generated during USP. This will lead to a deeper quantitative process understanding and identification of issues in the DSP early on. Here, the HCPs were categorized into “The Good, the Bad, and the Ugly” by evaluating their physicochemical properties compared to the monoclonal antibody. In this approach “Good” impurities possess a MW lower than 15 kDa and a pI lower than 4.75. “Ugly” impurities on the other hand exhibit a pI of 7.3–9.3, whereas “Bad” impurities feature a pI between 4.75 and 7.3 as well as between 9.3 and 10.0. In order to evaluate the classification system for the generated HCPs, orthogonal analytical methods are of utmost importance. IEX and SEC analysis were conducted for the identification of impurities. Theoretical pI and MW calculated based on the amino acid sequence differ from the experimental values obtained in 2D gel electrophoresis. This is due to not considering posttranslational modifications, as well as in vivo and ex vivo proteolytic processing.
Nevertheless, it is possible to characterize HCP based on pI and MW properties. In order to fully categorize the separation efficiency of each unit operation in the DSP as well as of their combinations, the HCP profile has to be determined with the aforementioned analytical methods in future approaches. This portfolio can of course be extended by adding supplementary methods like NMR technologies, preferably online [49].
Considering the significant amount of work in terms of characterization, monitoring, and removal of impurities and contaminations created by the USP step, as well as the time and cost associated with their removal, it may be worthwhile to reflect in more detail how these impurities and product variations are generated in the first place. Work to this end already started some time ago. Initial results and corresponding concepts for a more balanced integrated process design will be presented in the near future.

The authors would especially like to acknowledge Petra Gronemeyer (now Boehringer/Biberach) for her outstanding contribution to this topic during her PhD studies, for which she has been highly esteemed at conferences. 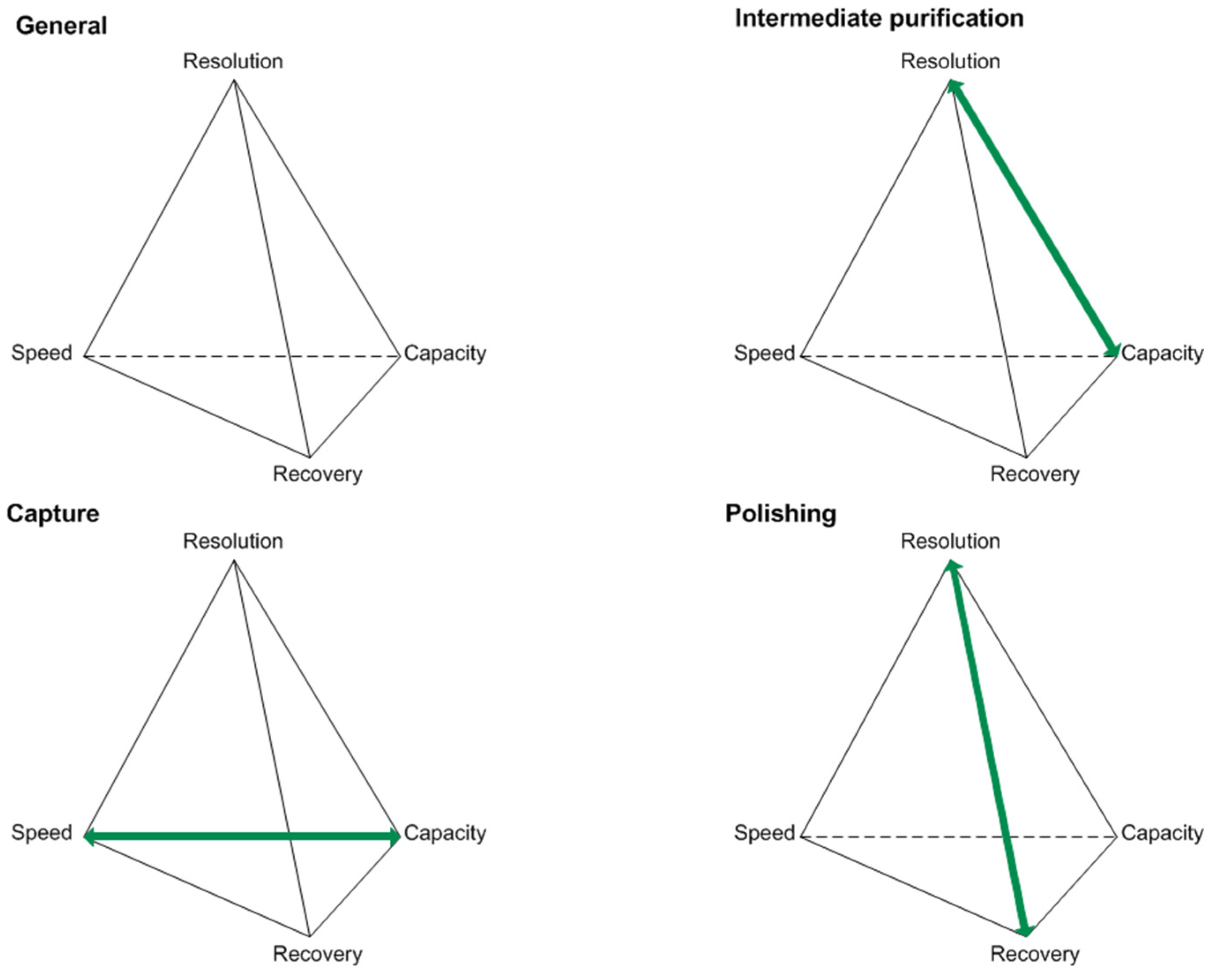 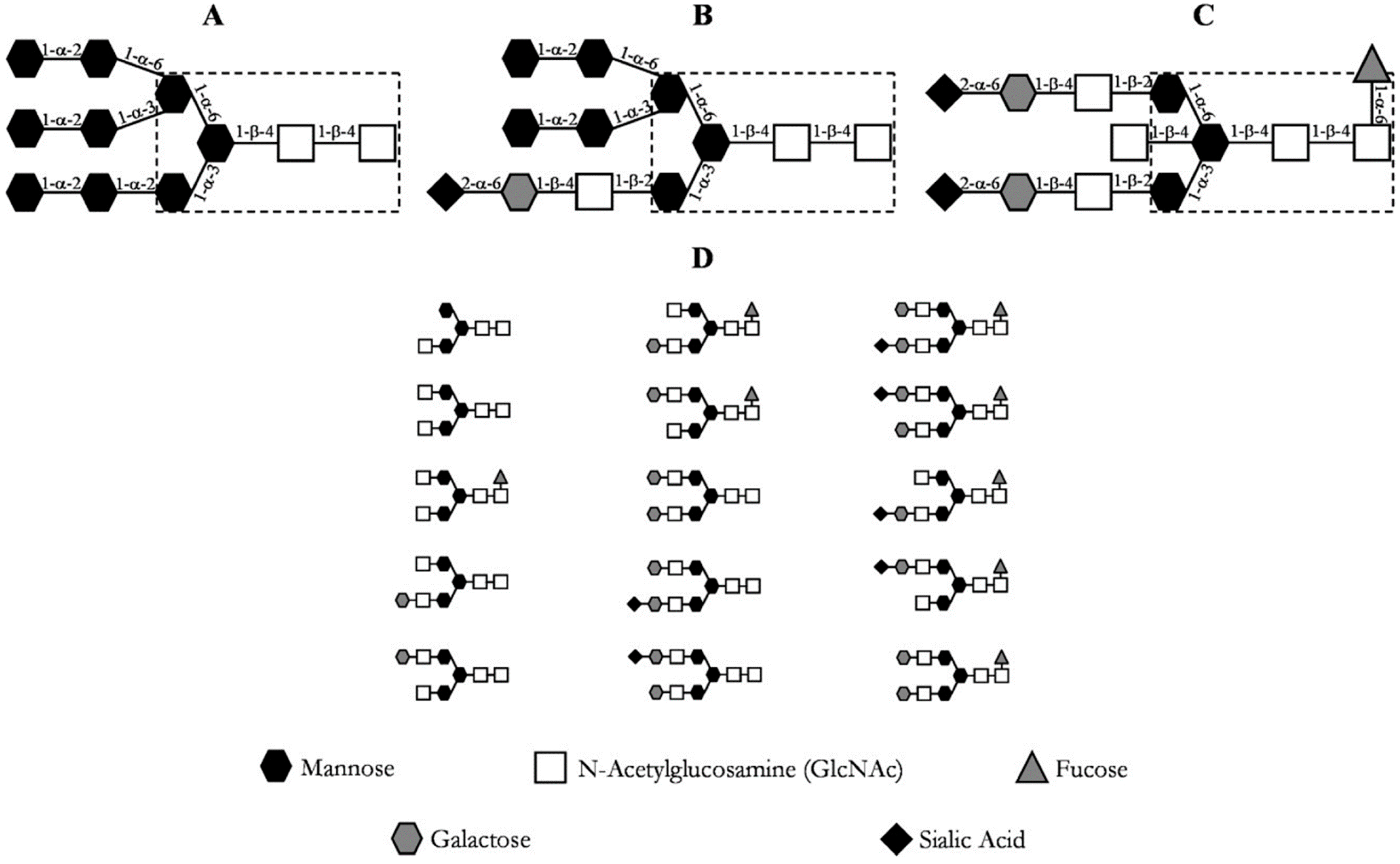 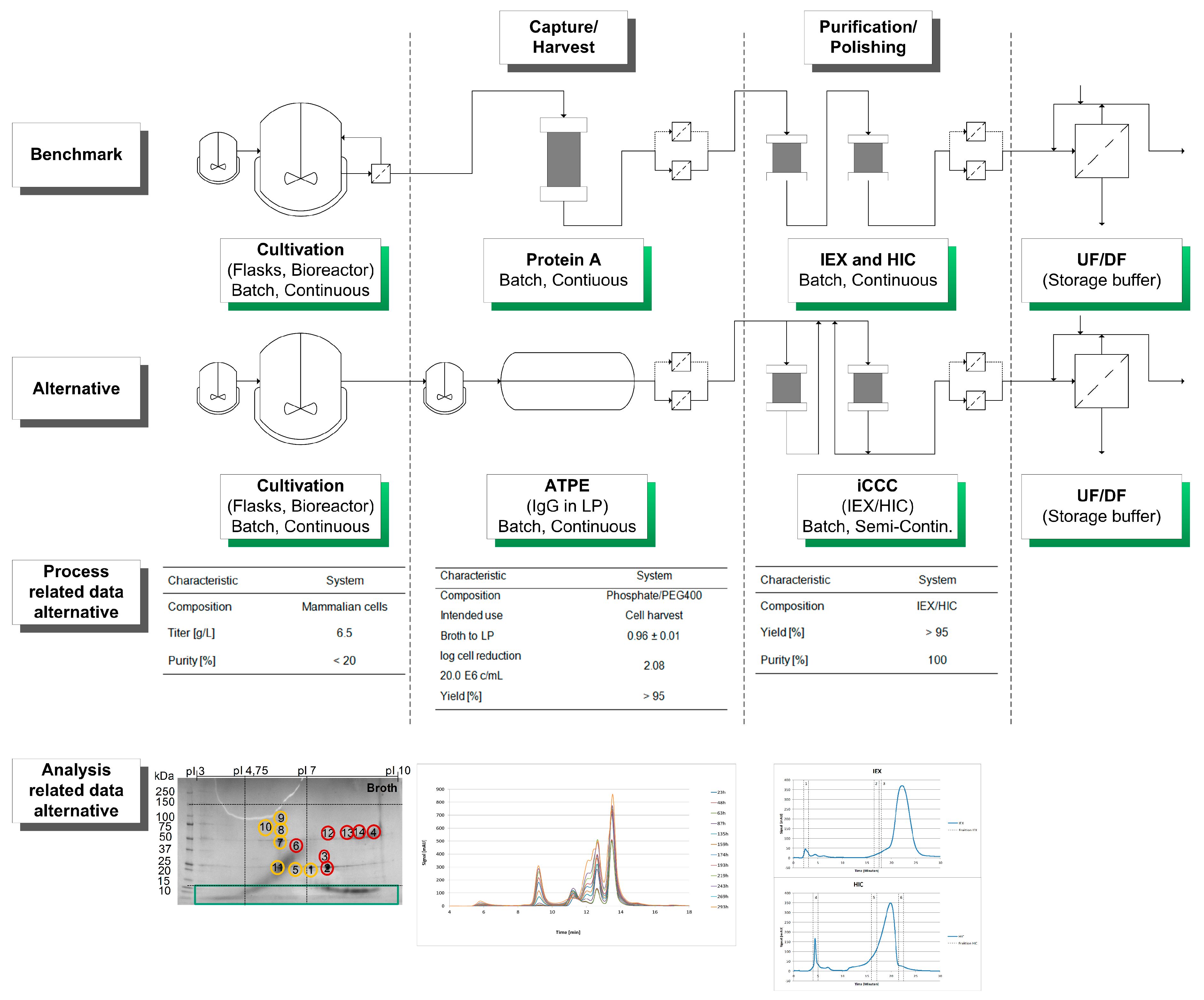