Study on the Spatial Restructuring of the Village System at the County Level Oriented toward the Rural Revitalization Strategy: A Case of Jintan District, Jiangsu Province

The amount of habitat in a landscape is an important metric for evaluating the effects of land cover on biodiversity, yet it fails to capture complex temporal dimensions of resource availability that could be consequential for species population dynamics. Here, we use a spatially-explicit predator–prey metapopulation model to test the effect of different spatiotemporal resource patterns on insect predators and their prey. We examined population responses in model landscapes that varied in both the amount and temporal variability of basal vegetation. Further, we examined cases where prey comprised either a single generalist species or two specialist species that use different resources available either early or late in the growing season. We found that predators and generalist prey benefitted from lower temporal variance of basal resources, which increased landscape-scale abundances. However, increasing the amount of basal resources also increased the variability of generalist prey populations. Specialist prey, on the other hand, did not benefit from less temporally variable basal resources, as they were restricted by habitat type, while also suffering greater predation. Predators achieved greater prey suppression in landscapes with less temporally variable resources, but the overall effects on prey abundance depended on prey habitat specialization. Our simulations demonstrate the joint importance of both the amount and temporal variability of resources for understanding how landscape heterogeneity influences biodiversity and ecosystem services such as the biological control of agricultural pests. View Full-Text
Keywords: predator–prey interactions; landscape ecology; agroecosystems; ecosystem services; biological control; resource complementation predator–prey interactions; landscape ecology; agroecosystems; ecosystem services; biological control; resource complementation
►▼ Show Figures 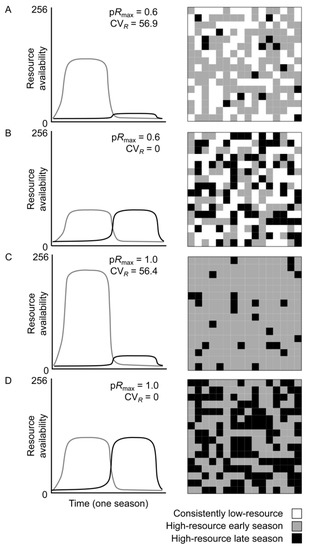