The Sustainable Management of Land and Fisheries Resources Using Multicriteria Techniques: A Meta-Analysis

:
In recent years modern societies have attached a multifunctional requirement to the use of renewable resources, making their optimal sustainable management more complex. In the last decades, in many cases, this complexity is addressed by formulating management models with the help of the concepts and methods belonging to the well-known multicriteria decision-making (MCDM) paradigm. The purpose of this paper was to undertake a hermeneutic meta-analysis of the literature provided in primary journals on issues related to the management of these resources with the help of the MCDM paradigm. In this way, the paper aimed to obtain new, basic insights with considerations that might improve the efficiency of future research in the field studied. The meta-analysis was implemented by formulating and testing a battery of hypotheses of how the MCDM methods have been used in the past for the formulation of management models for the type of resource analyzed.
Keywords:
agriculture; forestry; meta-analysis; multicriteria decision-making; sustainability

Land and fisheries resources belong to the renewable resources group. The stock of this type of resource changes according to a fairly predictable biological growth rate. The sustainable management of the resource requires its rate of use to be lower than its corresponding growth rate. Among these resources, the most significant ones are found in the areas of agriculture, fisheries, and forestry. In the past few years, a multifunctional requirement has been associated with them, making their management a complex decision-making problem [1,2,3]. This complexity increases considerably within the current context of sustainability [4]. Obviously, in this new, realistic scenario, the balance between the growth and use rates of the resource is necessary, but it is not a sufficient condition for managing it rationally, for which several functions are typically required by modern societies in the management of this type of resource. Among them, and without being exhaustive, the following ones can be cited: the incorporation into the management process of a diverse ecosystem service other than that of provision [5]; the assimilation of the multifunctionality idea at a landscape level [6]; the integration into the decision-making process of the preferences of several stakeholders [2]; and the presence in the analysis of new information technology systems that optimize the use of provisioning services [7].
In short, the inclusion of the multifunctional requirement implies, in many instances, the consideration in the management process of several criteria that are usually in conflict. For this reason, in general, the use of analytical approaches based on the classic optimization of a single criterion function is somewhat useless for dealing with this type of problem [8]. Due to this type of insufficiency during the past decades, it was proposed that the multifunctional issue underlying the management of these resources could be advantageously dealt with by resorting to concepts and tools belonging to the field of multicriteria decision-making (MCDM). A pioneer work in this direction can be seen in [9].
In accordance with the above orientation and from a historical perspective, the following pioneer works should be cited. For example, the use of multiobjective programming was proposed in the fisheries field [10]; the use of goal programming models for dealing with some forest management problems was depicted in [11]; and other authors have exemplified the use of several multicriteria methods for solving continuous problems in agricultural planning, emphasizing that multiple objectives are the rule rather than the exception in agricultural decision-making [9,12].
Besides the above, other critical reviews following an MCDM orientation in the management of the three biological resources mentioned should be highlighted. Regarding agriculture, some studies can be cited, such as [5,13]; the former critically reviews applications of multicriteria methods to discrete problems, while the latter paper deals with applying multicriteria methods to problems of a continuous nature. In the forestry field, many recent reviews focus on general forest management issues [3,14,15,16,17]. This literature is not so extensive in the fisheries field, but several contributions have stood out, such as [8,18].
Another point worth noting is the successful use of the MCDM methods for solving specific problems related to the sustainable management of the resources studied [19,20,21]. This orientation is especially useful when the purpose of the analysis is to quantify and explain the sustainability of different natural systems by defining and measuring a significant number of criteria and indicators [22,23]. Some relevant and recent examples in this direction include the works in [24,25] for agriculture, those in [26,27] for fisheries, and finally, those in [28,29,30] for forestry. Although there are different methodologies grouped under the umbrella of MCDM techniques, which appear in later sections, one of these techniques should be especially mentioned due to its preponderance in multiple areas, namely the analytic hierarchy process (AHP), which has been the technique most widely used in other fields [20,31,32]. There are several reasons explaining this fact [33], and undoubtedly one of them is the flexibility offered by this methodology in order to hybridize with other tools, whether or not they belong to the toolkit of the MCDM techniques. This point justifies the fact that some of the hypotheses to be formulated are limited to the application of this particular method.
The three biological resources included in this study are mostly analyzed jointly in many bioeconomy references [34,35]. On the other hand, the EU biobased economy strategy considers them to belong to the same kind of economic activity [36]. In addition to this, in the last two decades or so, extensive literature has proposed their optimal management by using different MCDM approaches. This study’s main objective, therefore, is to make a critical assessment of the results provided by a meta-analysis over the last ten years involving the three resources analyzed, and it aims to demonstrate how these methodologies have been used, allowing the reader to gain useful insights into their correct applications in the future. Thus, we have built up an extensive database of works published in primary journals during the past few years (2008–2017) on the management of the three types of biological resources considered with the help of MCDM methods. In a second step, following a hermeneutic meta-analysis orientation, the literature reviewed will be considered as a kind of raw material for testing a set of hypotheses on how MCDM methods were used in the past in the field analyzed. In this way, it will be shown how the corroboration or refutation of the hypothesis formulated might provide valuable new knowledge, the consideration of which could improve several theoretical as well as practical aspects of the future research to be undertaken in the field studied.

The number of applications reported in the literature on the use of MCDM methods for a satisfactory management of the natural resources considered is impressive and has a clear rising trend. This line of work started around forty years ago with not too many applications, but in the last decade, the interest in this type of orientation has increased dramatically. From the hermeneutic meta-analysis undertaken, the following conclusions deserve to be highlighted:
It is logical to think that the above considerations and recommendations, supported by the hermeneutic meta-analysis undertaken, will help future researchers and practitioners to use the arsenal of MCDM methods for dealing with management problems more efficiently in the three types of natural renewable resources analyzed. Finally, this paper clearly shows the substantial extent and depth of MCDM applications in these fields over the past decade. In addition, it seems clear that practitioners interested in the sustainable management of land, forest, and fisheries resources could find this paper useful for identifying gaps and opportunities in order to properly apply these techniques in the future.

The work of Carlos Romero, Carlos Iglesias-Merchan, and Luis Diaz-Balteiro was funded by the Ministry of Economy and Competitiveness of Spain under project AGL2015-68657-R. Additionally, this research was partially financed by the European Union’s H2020 Research and Innovation Programme under the Marie Sklodowska-Curie Actions, grant agreement No. 691149–SuFoRun.

Thanks are given to Diana Badder and other native speakers for editing the English. In addition, we appreciate the comments raised by three referees who have helped us in order to increase the clarity and accuracy of our work.

Appendix A. Searches in WOS and Scopus 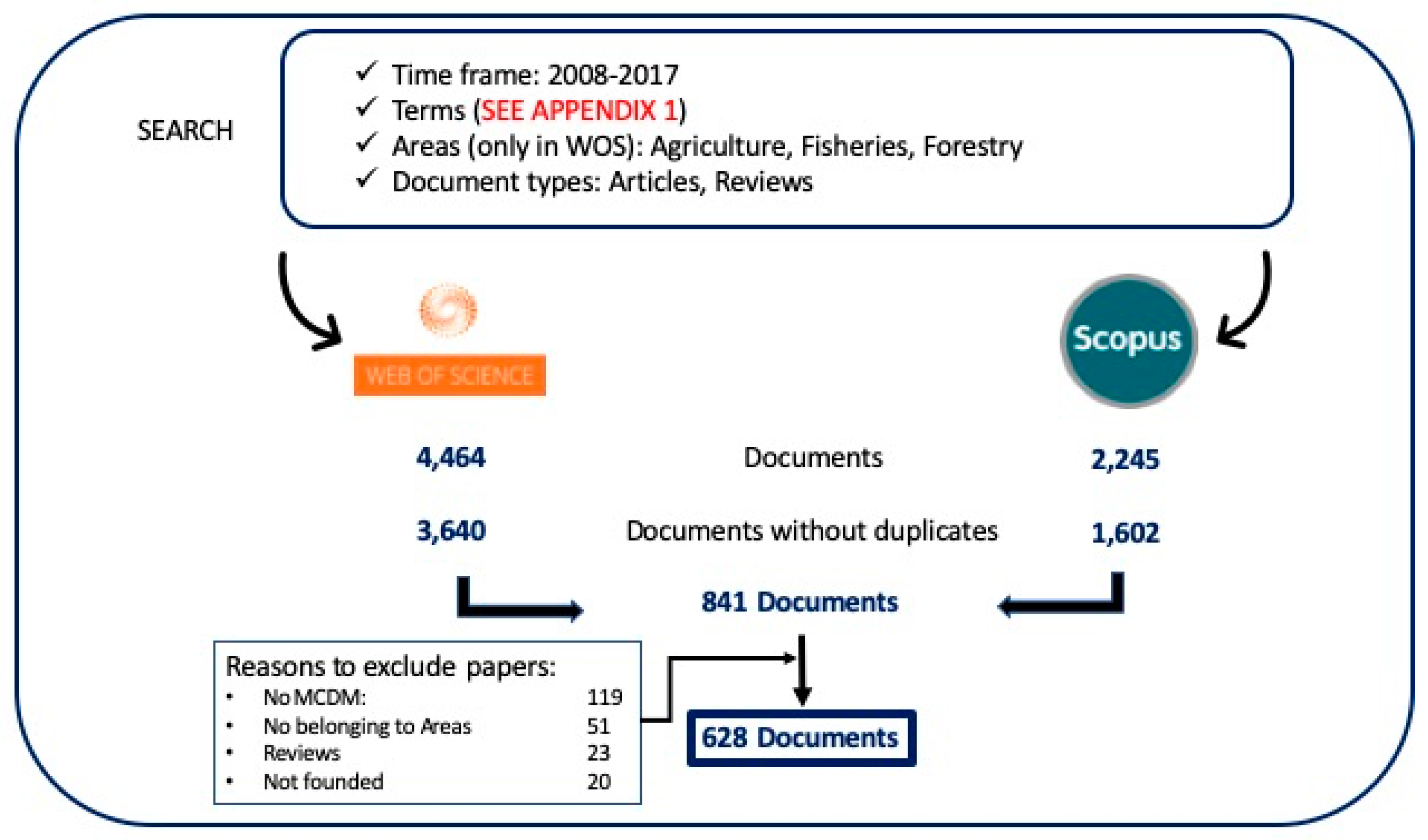 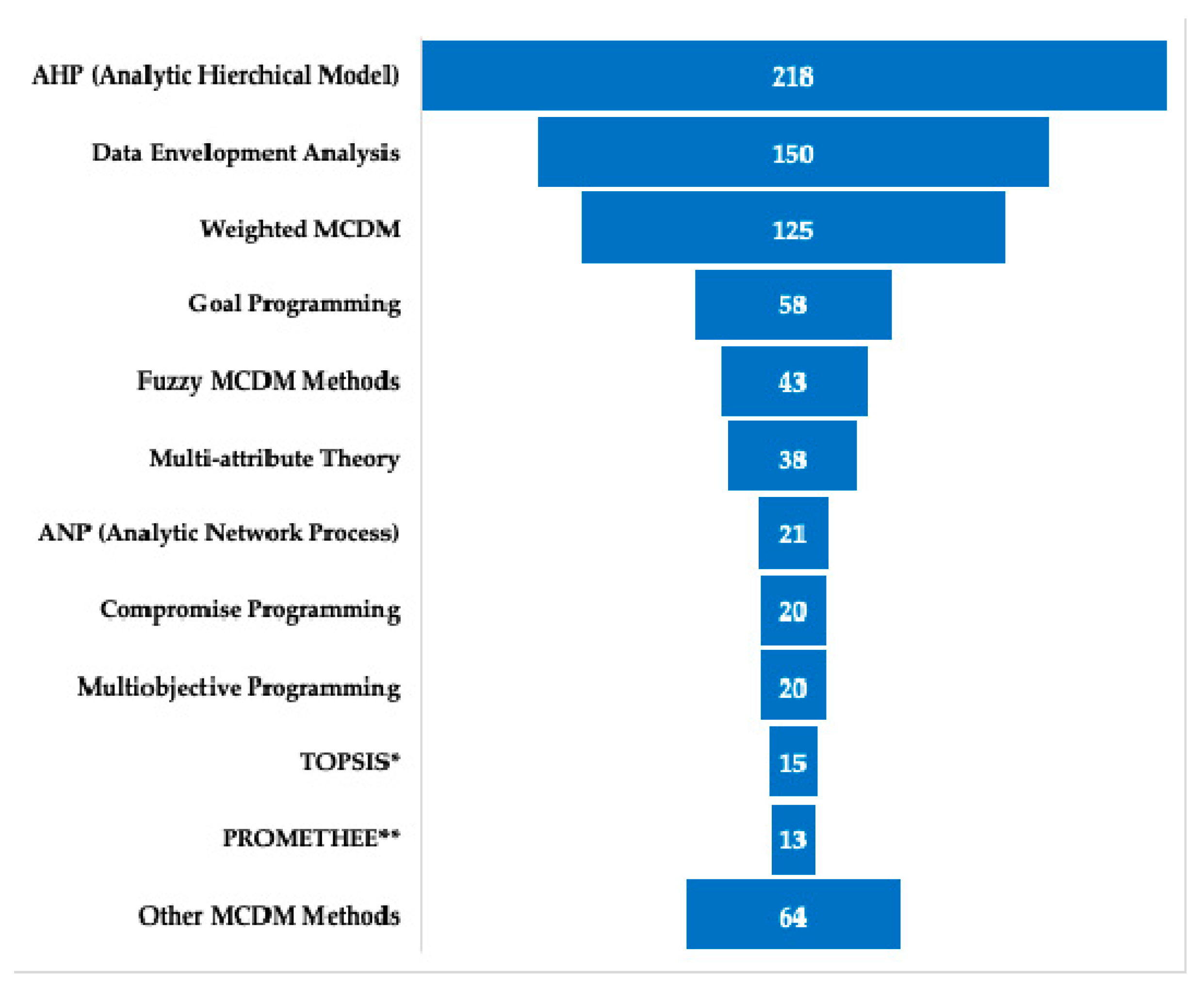