This paper describes how knowledge mobilization evolved during a study that assessed a proposed increase in industrial water withdrawals from the Athabasca River in northern Alberta, Canada, and potential impacts on a suite of freshwater semi-aquatic mammals in the broader ecosystem. The oil sands region in northeastern Alberta faces various pressures that require rapid knowledge mobilization and decision making, while still acknowledging ecological sensitivities immediately downstream in the Peace-Athabasca Delta (PAD) in the Wood Buffalo National Park. Data were acquired using a multi-faceted approach, including literature reviews, acquisition and synthesis of raw data, and interviews with local knowledge holders. The final outcome of the study was then contextualized relative to elements of knowledge mobilization: (1) research, (2) dissemination, (3) uptake, (4) implementation, and (5) impact. Knowledge mobilization was easiest to quantify for the first two elements, yet was still present in varying forms in the latter stages. The cultural importance of beavers, muskrats, river otters, and mink for communities associated with the Athabasca River and the PAD allowed for increased engagement during all stages of the research process, which then facilitated the co-production of potential solutions among different organization and perspectives. View Full-Text
Keywords: data sources; Indigenous knowledge; industrial development; semi-aquatic mammals data sources; Indigenous knowledge; industrial development; semi-aquatic mammals
►▼ Show Figures 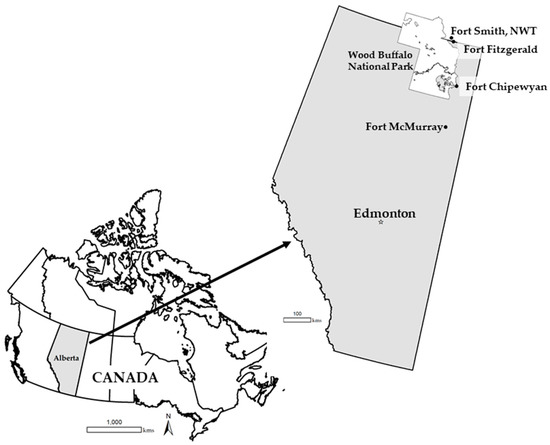