Gentrification through Green Regeneration? Analyzing the Interaction between Inner-City Green Space Development and Neighborhood Change in the Context of Regrowth: The Case of Lene-Voigt-Park in Leipzig, Eastern Germany
Previous Article in Journal

Navigating between Tea and Rubber in Xishuangbanna, China: When New Crops Fail and Old Ones Work

Shifting cultivation has been shown to be the primary cause of land use change in the Democratic Republic of Congo (DRC). Traditionally, forested and fallow land are rotated in a slash and burn cycle that has created an agricultural mosaic, including secondary forest, known as the rural complex. This study investigates the land use context of new forest clearing (during 2000–2015) in primary forest areas outside of the established rural complex. These new forest clearings occur as either rural complex expansion (RCE) or isolated forest perforations (IFP), with consequent implications on the forest ecosystem and biodiversity habitat. During 2000–2015, subsistence agriculture was the dominant driver of forest clearing for both extension of settled areas and pioneer clearings removed from settled areas. Less than 1% of clearing was directly attributable to land uses such as mining, plantations, and logging, showing that the impact of commercial operations in the DRC is currently dwarfed by a reliance on small-holder shifting cultivation. However, analyzing the landscape context showed that large-scale agroindustry and resource extraction activities lead to increased forest loss and degradation beyond their previously-understood footprints. The worker populations drawn to these areas create communities that rely on shifting cultivation and non-timber forest products (NTFP) for food, energy, and building materials. An estimated 12% of forest loss within the RCE and 9% of the area of IFP was found to be within 5 km of mines, logging, or plantations. Given increasing demographic and commercial pressures on DRC’s forests, it will be crucial to factor in this landscape-level land use change dynamic in land use planning and sustainability-focused governance. View Full-Text
Keywords: Landscape-Scale; land cover and land use(LULC); Democratic Republic of Congo (DRC) Landscape-Scale; land cover and land use(LULC); Democratic Republic of Congo (DRC)
►▼ Show Figures 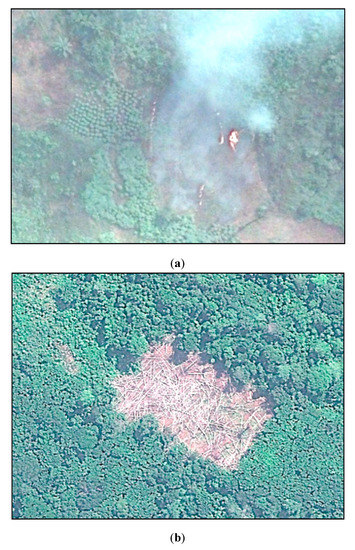