Assessing the Effect of Land Use Change on Surface Runoff in a Rapidly Urbanized City: A Case Study of the Central Area of Beijing

The change in land use during the process of urbanization affects surface runoff and increases flood risk in big cities. This study investigated the impact of land use change on surface runoff in Beijing’s central area during the period of rapid urbanization from 1984 to 2019. Land use maps of 1984, 1999, 2009, and 2019 were generated by image classification of Landsat images. Surface runoffs were calculated with the Soil Conservation Service curve number (SCS-CN) model. Correlation analysis was used to identify the dominant factor of land use change affecting surface runoff. The result showed that the variation trend of surface runoff was consistent with the trend of impervious land in Beijing’s central area, which increased during 1984~2009 and decreased during 2009~2019. Correlation analysis showed that changes in surface runoff were most strongly correlated with changes in impervious surfaces when compared with the correlation of runoff with other types of land use. The results of this study may provide a reference for city flood control and urban planning in fast growing cities worldwide, especially in developing countries. View Full-Text
Keywords: land use change; urbanization; SCS-CN model; surface runoff; Beijing land use change; urbanization; SCS-CN model; surface runoff; Beijing
►▼ Show Figures 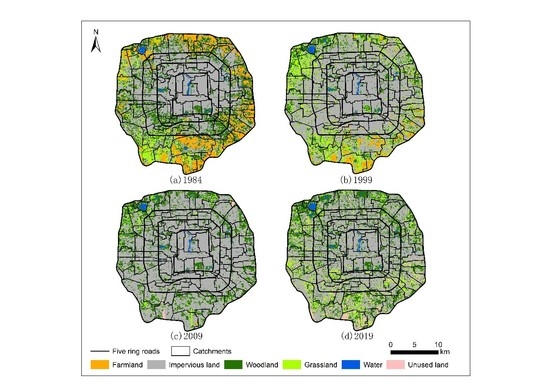 
Hu S, Fan Y, Zhang T. Assessing the Effect of Land Use Change on Surface Runoff in a Rapidly Urbanized City: A Case Study of the Central Area of Beijing. Land. 2020; 9(1):17.


Hu, Shanshan; Fan, Yunyun; Zhang, Tao. 2020. "Assessing the Effect of Land Use Change on Surface Runoff in a Rapidly Urbanized City: A Case Study of the Central Area of Beijing." Land 9, no. 1: 17.