An Analysis of the Causes of Deforestation in Malawi: A Case of Mwazisi
Previous Article in Journal

Centuries of colonization of the Atlantic Forest biome in Brazil have led its native vegetation cover to be reduced to only 11.7%. On the other hand, regional land changes have fostered natural forest regeneration, since the 1960s, in the region of Paraíba Valley. A fieldwork survey in rural properties was conducted in three municipalities (n = 90, thirty in each municipality), to assess how forest transition is affected by the region’s socioeconomic development and biophysical dimensions of the landscape. To select the municipalities among thirty-four, we applied the modified Thompson Tau technique to detect outlier values for three selected variables: Natural forest cover, eucalyptus plantation cover, and municipal revenue. The outliers were dropped from consideration and the municipality with the maximum value for each variable was selected. Based on the survey and GIS analysis using land-cover maps, topography, and hydrology variables, we concluded that the diminished land-use pressure in the Paraíba Valley, a response to the regional economic development (e.g., increasing labor demand in urban areas pushing rural migration), resulted in the increase of the Atlantic forest cover. Interestingly enough, a counter-migration of people moving to rural areas as a newly valued amenity has the potential to reshape the rural landscape with positive outcomes to the Atlantic forest cover. View Full-Text
Keywords: rural property survey; thompson tau technique; land-use decisions; Atlantic forest transition rural property survey; thompson tau technique; land-use decisions; Atlantic forest transition
►▼ Show Figures 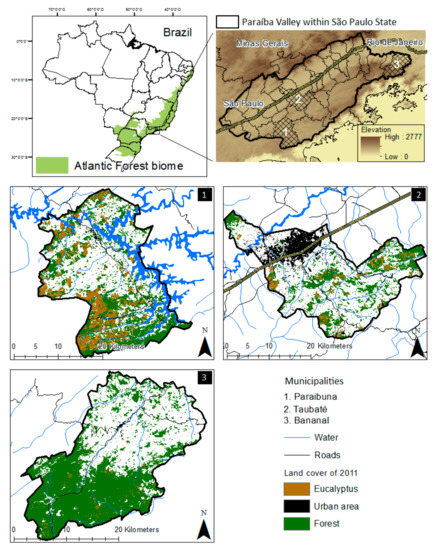