The Actors, Rules and Regulations Linked to Export Horticulture Production and Access to Land and Water as Common Pool Resources in Laikipia County, Northwest Mount Kenya

Cambodia has become a principal target of transnational (and domestic) land grabs over the past decade, mostly in the form of economic land concessions (ELCs). The northeastern part of the country—where the majority of Cambodia’s indigenous people reside—is a particular hotspot. In this article, we discuss three policy mechanisms that the Cambodian government has employed to extend and legitimize land exclusions in the name of national economic development through the example of two indigenous villages in Srae Preah Commune, Mondulkiri Province. First, we show how the allocation of two ELCs has deprived indigenous communities of their communally managed land. Second, we examine how communal land titling processes have failed to provide indigenous villagers with effective legal mechanisms to counteract ELCs and land encroachment by internal migrants. Third, we elucidate how the promotion of cash crop production contributed to livelihood and land use transitions from a reliance on forest resources in 2003 to a dependence on cash crops in 2012 to a struggle to remain resilient amid a slump in crop prices in 2018. We conclude that the combination of these policies has undermined communal ownership and livelihood resilience under a situation of limited exit strategies. View Full-Text
Keywords: land grabbing; resilience; commons; land concessions; communal land titling; Southeast Asia land grabbing; resilience; commons; land concessions; communal land titling; Southeast Asia
►▼ Show Figures 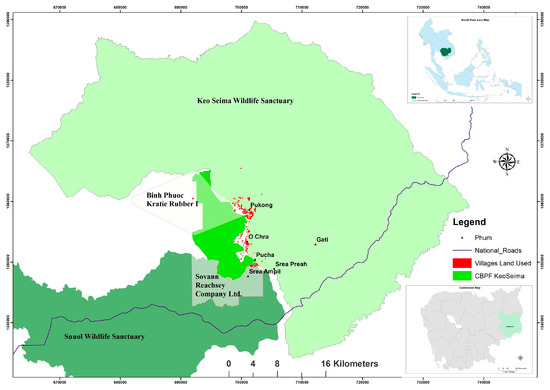