Wildlands are increasingly lost to human development. Conservation scientists repeatedly call for protecting the remaining wildlands and expanding the land area protected in reserves. Despite these calls, conservation reserves can be eliminated through legislation that demotes their conservation status. For example, legislation introduced to the Congress of the United States recently would demote 29 Wilderness Study Areas (WSAs) from the protections afforded by their existing status. The proposed legislation suggests that the 29 areas are not suitable for a promotion and future inclusion in the National Wilderness Preservation System based on decades-old local evaluations. Local evaluations, notwithstanding, it may be important to consider the value of lands from a national perspective. Without a national perspective, local evaluations alone may lead to overlooking the national significance of lands. With this in mind, I used five qualities of wildland value (wildness, intactness of night sky, lack of human-generated noises, intactness of mammals, and intactness of mammal carnivores of conservation concern) to compare the 29 WSAs to all national parks and wilderness areas located within the contiguous United States. The pool of 29 WSAs was similar to the pool of national parks and wilderness areas with respect to the five qualities assessed, and some of the WSAs were characterized by higher values than most of national parks and wilderness areas. This analysis demonstrates the national significance of the WSAs targeted for demotion of their existing conservation status. Such an approach could be used in future land management legislation and planning to ensure that a national perspective on conservation value is brought to bear on decisions facing federally-managed lands. View Full-Text
Keywords: Wilderness Study Areas; light pollution; noise pollution; wildness; protected areas Wilderness Study Areas; light pollution; noise pollution; wildness; protected areas
►▼ Show Figures 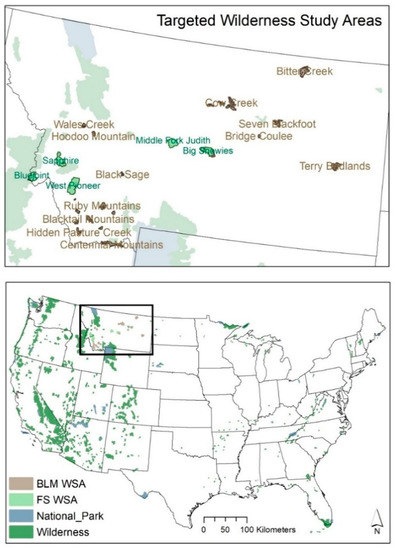