Collaborative Research on the Ecology and Management of the ‘Wulo’ Monsoon Rainforest in Wunambal Gaambera Country, North Kimberley, Australia
Next Article in Special Issue

From Producers to Consumers: The Challenges and Opportunities of Agricultural Development in Iraqi Kurdistan

Agricultural Land Use Change after NAFTA in Central West Mexico

It has been suggested that agricultural land use change and modernization in agricultural production techniques are related to the loss of crop diversity. Two processes contribute to this loss; first is the replacement of landraces by modern varieties, and second is the abandonment of traditional crops in favor of cash crops. We studied the expression of these processes in a region that is both an agro-biodiversity and cultural center and one of the most significant fruit exporters of Mexico. We analyzed agricultural change based on the transformation of cropping areas and the primary crops’ locations in Michoacán state. We examined the crop-harvested area statistics from 1950 to 2015, and identified 23 crops as the most important in terms of harvested area and monetary value. After NAFTA (North American Free Trade Agreement), harvested area for nine crops changed significantly: seven crops increased, and two decreased. Positive trends were observed for commercial fruits oriented to export markets, and negative trends were observed for traditional crops. These crops, such as beans and maize, are important for food security. Additionally, we analyzed how these land-use and agricultural changes overlap in zones of maize planted-area change. Using a maize-race collection database, we identified three native maize races that could be at risk due to the abandonment of maize in favor of commercial crops. View Full-Text
Keywords: crop diversity; Michoacán; maize races; avocado; cash crops; agricultural modernization; NAFTA; landscape transformation crop diversity; Michoacán; maize races; avocado; cash crops; agricultural modernization; NAFTA; landscape transformation
►▼ Show Figures 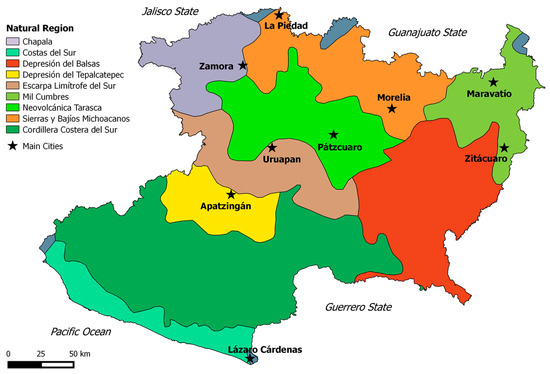