Anthropogenic factors are responsible for major land use and land cover changes (LULCC). Bale Mountain Eco-Region in Ethiopia is a biodiversity-rich ecosystem where such LULCC have occurred. The specific objectives of this study were to: (i) determine which LULC types gained or lost most as a result of the observed LULCC; (ii) identify the major drivers of the LULCC/deforestation; and (iii) assess the approximate amount of carbon stock removed as a result of deforestation during the study period. Remote sensing and GIS were used to analyze LULCC. Landsat images acquired in 1985, 1995, 2005, and 2015 were used. Additionally, data from the Central Statistics Agency on cropland expansion, and human and livestock population growth were analyzed and correlations were made. The results showed that forest lost 123,751 ha while farmland gained 292,294 ha. Farmland and urban settlement expansion were found to be major drivers of LULCC. Aboveground carbon stock removed from forest and shrubland was more than 24 million tons. In the future, allocation of land to different uses must be based on appropriate land use policies. Integrating biodiversity and ecosystem values for each land cover as per the UN Sustainable Development Goal (UN-SDG) 15.9 may be one of the mechanisms to limit unplanned expansion or invasion of one sector at the expense of another. View Full-Text
Keywords: land use and land cover change; forest; farmland; correlation; remote sensing; GIS land use and land cover change; forest; farmland; correlation; remote sensing; GIS
►▼ Show Figures 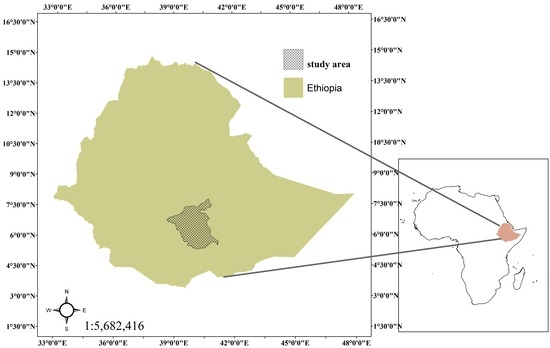