Evaluating the Potentiality of Sentinel-2 for Change Detection Analysis Associated to LULUCF in Wallonia, Belgium

Population growth rates in Sub-Saharan East Africa are among the highest in the world, creating increasing pressure for land cover conversion. To date, however, there has been no comprehensive assessment of regional land cover change, and most long-term trends have not yet been quantified. Using a designed sample of satellite-based observations of historical land cover change, we estimate the areas and trends in nine land cover classes from 1998 to 2017 in Ethiopia, Kenya, Uganda, Malawi, Rwanda, Tanzania, and Zambia. Our analysis found an 18,154,000 (±1,580,000) ha, or 34.8%, increase in the area of cropland in East Africa. Conversion occurred primarily from Open Grasslands, Wooded Grasslands, and Open Forests, causing a large-scale reduction in woody vegetation classes. We observed far more conversion (by approximately 20 million hectares) of woody classes to less-woody classes than succession in the direction of increasing trees and shrubs. Spatial patterns within our sample highlight regional land cover conversion hotspots, such as the Central Zambezian Miombo Woodlands, as potential areas of concern related to the conservation of natural ecosystems. Our findings reflect a rapidly growing population that is moving into new areas, with a 43.5% increase in the area of Settlements over the three-decade period. Our results show the areas and ecoregions most impacted by three decades of human development, both spatially and statistically. View Full-Text
Keywords: land cover change; TimeSync; East Africa; Landsat; statistical inference; development land cover change; TimeSync; East Africa; Landsat; statistical inference; development
►▼ Show Figures 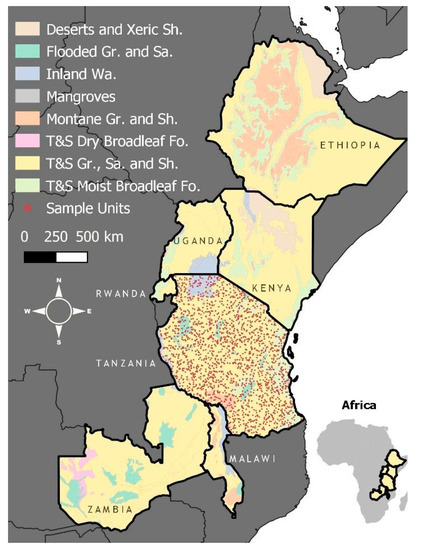