Mountain Watch: How LT(S)ER Is Safeguarding Southern Africa’s People and Biodiversity for a Sustainable Mountain Future
Previous Article in Journal

Influence of Residents’ Perception of Tourism’s Impact on Supporting Tourism Development in a GIAHS Site: The Mediating Role of Perceived Justice and Community Identity
Previous Article in Special Issue

Mountain environments and communities are disproportionately impacted by climate change. Changes in temperature are greater than at lower elevations, which affect the height of the cloud base and local rainfall patterns. While our knowledge of the biophysical nature of climate change in East Africa has increased in the past few years, research on Indigenous farmers’ perceptions and adaptation responses is still lacking, particularly in mountains regions. Semi-structured interviews were administered to 300 farmers on Mount Kilimanjaro (n = 150) and the Udzungwa Mountains (n = 150) in Tanzania across gender and wealth groups. Respondents in both mountains reported not only changes in rainfall and temperature, corresponding with meteorological data, but also a greater incidence of fog, wind, frost, and hailstorms—with impacts on decreased crop yields and increased outbreaks of pests. The most common adaptation strategies used were improved crop varieties and inputs. Wealthier households diversified into horticulture or animal rearing, while poorer households of Hehe ethnicity diversified to labour and selling firewood. Despite being climate change literate and having access to radios, most respondents used Indigenous knowledge to decide on planting dates. Our findings highlight how context and culture are important when designing adaptation options and argue for greater involvement of local stakeholders in adaptation planning using a science-with-society approach. Place-based results offer generalisable insights that have application for other mountains in the Global South. View Full-Text
Keywords: farmer; Chagga; gender; East Africa; local knowledge; Kilimanjaro; Hehe; Udzungwa; wealth groups farmer; Chagga; gender; East Africa; local knowledge; Kilimanjaro; Hehe; Udzungwa; wealth groups
►▼ Show Figures 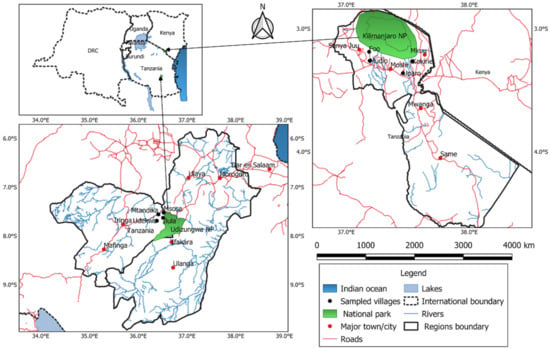 Kaiza R. Kaganzi
Kaiza Rutachwamangyo Kaganzi works for the School of International Training—a world learning programme in the Department of Wildlife Conservation and Political Ecology, and for the Frankfurt Zoological Society on the rangeland condition of the Maasais in the Loliondo Game Controlled Area of the Great Serengeti Ecosystem. Kaiza graduated from the College of African Wildlife Management, Mweka, in 2019 with a bachelor’s degree in wildlife management. He was a part of the College of African Wildlife Management team tasked with developing a Swahili version of the Spatial Monitoring and Reporting Tool, and his final year dissertation was on the influence of Acacia zanzibarica encroachment on giraffe’s abundance and distribution pattern in the Saadani National Park.

Fatuma Mcharazo
Fatuma Hamis Mcharazo works for Tanzania National Park Authority (TANAPA) as a conservational officer. She obtained a bachelor’s degree in wildlife management from the College of African Wildlife Management, Mweka, in 2019. Her research dissertation addressed ground beetle diversity as a bioindicator of healthy ecosystems in Rau Forest Reserve in Kilimanjaro. She has also worked on a project funded by the National Geographic Society as a facilitator for a conservational educational program in villages near the Udzungwa Mountains National Park.

Emanuel H. Martin
Dr Emanuel Martin is a senior lecturer at the College of African Wildlife Management, Mweka, Tanzania. He has a PhD in wildlife management from Sokoine University of Agriculture (SUA), an MSc in protected areas management from the University of Klagenfurt, and a BSc in wildlife management from SUA. He has over 15 years of working experience in the field of wildlife conservation. Before joining Mweka, Dr Martin worked for the Mokolodi Nature Reserve in Botswana and the Udzungwa Mountains National Park and also conducted other work in Rwanda, Uganda and Saudi Arabia on wildlife ecology, climate change, ecological monitoring, and protected area management.

Robert A. Marchant
Prof. Rob Marchant is a professor of tropical ecology at the University of York, where he leads the York Institute for Tropical Ecosystems. His research investigates ecosystem dynamics in the moist forests, savanna–woodland spectrums, and cropland mosaics across the tropics with a particular focus on eastern and southern Africa. His research aims at developing deep-time insights for addressing current and future environmental challenges, enabling community engagement, conservation, and contributing to the management and protection of tropical ecosystems from the urban through to the rural.

Jessica P. R. Thorn
Dr Jessica Thorn is a Namibian ecologist with a background in human geography working as a research associate at the University of York and senior research fellow at the African Climate and Development Initiative. She has a PhD from Oxford. She uses scenario planning, ecosystem services assessments, and participatory modelling to understand past, present, and future com-plex adaptive social–ecological systems in the context of climate resilience, land-use change, and infrastructure development. She has 15 years of experience working in 17 countries, mostly in Africa, Asia, and Latin America, and is an active contributor to international policy reports (e.g., IPCC, GEO, TEEB).
Zoom | Orient | As Lines | As Sticks | As Cartoon | As Surface | Previous Scene | Next Scene
We use cookies on our website to ensure you get the best experience. Read more about our cookies here.
Accept
We have just recently launched a new version of our website. Help us to further improve by taking part in this short 5 minute survey here. here.
Never show this again