Research on the Spatial Differences and Convergence Mechanism of Urban Land Use Efficiency under the Background of Regional Integration: A Case Study of the Yangtze River Economic Zone, China
Next Article in Special Issue

Could Land Abandonment with Human Intervention Benefit Cropland Restoration? From the Perspective of Soil Microbiota

Rural landscape evolution models are used as tools for the analysis of the causes and impact of land use changes on landscapes. The CLUE-S (the Conversion of Land Use and its Effects at Small regional extent) model was developed to simulate the changes in current land use, by using quantitative relationships between land uses and driving factors combined with a dynamic modeling of land use competition. One of the modules that build the “CLUE-S” is the non-spatial subset of the model that calculates the temporal evolution of the land use/cover under several socio-economic scenarios. The purpose of this research was to estimate the demands of land use in the area of Mouzaki, Thessaly plain, Greece with the ultimate goal of using them in the non-spatial module of the CLUE-S to predict the evolution of land uses in year 2040. These estimations are the quantitative prediction of the spatial change for all land use types at the aggregate level. Three models of forecasting the future land cover in the area were simulated, in order to obtain a clear view of the different land uses in the future. We distinguished three model-scenarios for calculating the demand-forecasts: (a) business as usual (BAU) scenario, that deals with a linear projection of the current land use demands, (b) rapid economic development (RED) scenario, and (c) ecological land protection (ELP) scenario. In the BAU scenario the land use demands for the year 2040 were calculated using linear interpolation utilizing historical data from 1960 to 2020. In the RED scenario, the demands were calculated by maximizing the economic benefit of land uses, and in the ELP scenario the demands were calculated by maximizing the environmental benefit of land uses. Furthermore, a multi-criteria analysis was performed to find the trade-offs between economic benefit maximization and environmental benefit optimization. It was found that the agricultural lands reach their maximum area under the RED scenario, while reaching their lower bound for the ELP scenario. The same goes for agroforestry systems. The grasslands reach their lower bound under the ELP scenario, while they achieve a higher value under the RED scenario. Concerning the silvopastoral woodlands, although an increase is foreseen under the BAU scenario, it appears that they reach their lower bound in the other two scenarios, RED and ELP. Forests receive intermediate values and cover a larger area under the ELP scenario compared with the RED scenario. The expected forest cover under the BAU scenario is higher. Moreover, sparse and dense shrublands receive their lower bound for both optimization scenarios, while the settlements reach the upper bound for the RED scenario and the lower one under the ELP scenario. View Full-Text
Keywords: agroforestry; non-spatial module of CLUE-S; scenario building; land use change; demand forecasts agroforestry; non-spatial module of CLUE-S; scenario building; land use change; demand forecasts
►▼ Show Figures 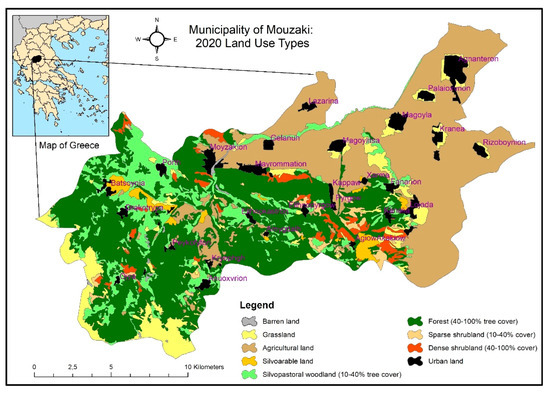