Native Plant Production in Chile. Is It Possible to Achieve Restoration Goals by 2035?
Next Article in Special Issue

The Cadastre as a Source for the Analysis of Urbanization Dynamics. Applications in Urban Areas of Medium-Sized Inland Spanish Cities
Previous Article in Journal

An Approach to Resolve Inconsistencies of Data in the Cadastre

Cadastral data, particularly cadastral maps, are used in many different disciplines and for various analysis purposes. A cadastral map is among the most widely used sources for historical land changes because of the robustness of its spatial quantitative information and the visual form of the information, which together makes them easy to analyze. However, there are some limitations arising from the use of a historical cadastral map, such are distortions of the paper before it was scanned and georeferenced and the lack of metadata regarding the quality and basic information (map scale, surveying method, etc.) [31,32]. For this research, cadastral maps from different time series and results of vectorization quality control were used.
The quality control procedure for cadastral data has been developed within the development of technical instructions for vectorization [33]. The procedure is based on the redundant data within the cadastral documentation. Vectorization reports contain the differences in data between the cadastral map and the register. By conducting a detailed analysis of these differences, we discovered the source and the cause of the difference and corrected the error that caused the inconsistency. For the purposes of this research, the results of quality control for three cadastral municipalities were used: Dol, Postira, and Stobreč. The cadastral municipalities Dol and Postira were graphically surveyed, and the cadastral documentation was established in the 19th century. The cadastral municipality Stobreč was resurveyed, and the cadastral documentation was re-established in the 20th century. All three of them were digitized and are today continuously maintained electronically. The cadastral datasets required for the analysis were scanned and georeferenced cadastral map sheets, vectorized cadastral map, and vectorization reports.
Depending on the type of difference, distinct archival data were also used. This refers to the historical cadastral map sheets and register data. The datasets were obtained from the cadastral authority (State Geodetic Administration [34]), as the data are not publicly available via a web service. Georeferenced and scanned paper cadastral map sheets were provided in the .tif format with the accompanying .tfw files, the vectorized cadastral maps were provided in the .dxf format, and the vectorization reports were provided in the .docx and .xlsx formats. Historical cadastral map sheets for the cadastral municipalities Dol and Postira from the National Archives in Split [34] were also used for the research.

The research area included three cadastral municipalities, namely Dol, Postira, and Stobreč, covering an area of 1681 ha. They are in the Split–Dalmatia County (Figure 2). Two cadastral municipalities, Dol and Postira, are located on the islands of Brač and Hvar, respectively, and Stobreč is on the mainland near the city of Split. Stobreč has a predominantly built-up area, while Dol and Postira are small settlements with predominant agricultural parcels. All the three cadastral municipalities are characterized by small parcels. The cadastral documentation has been produced at different political and technological circumstances. Dol and Postira are in the Franciscan cadastre, and Stobreč is in the socialist era.
General information and a summary of the quality control results for all the three cadastral municipalities are given in Table 1. The general information includes name, ID, scale, and key cadastral years of each cadastral municipality. Furthermore, the individual results of quality control from vectorization projects are summarized for the entire research area. Although vectorization was conducted around 20 years ago, inconsistencies are still present in the cadastral documentation.
According to previous experiences, area differences are the best indicator of inconsistencies. Discovering the causes of these differences directly leads us to the way we can correct these inconsistencies. In many cases, when the error that caused the parcel area difference is corrected, the topological or thematic errors are also resolved. As the parcels whose area difference exceeds the tolerance are the subject of this analysis, the approach was conducted for 610 cadastral parcels, which is 4.59% of all the cadastral parcels recorded in all the three municipalities.

The analysis of inconsistencies is performed by a cadastral expert visually comparing data from different time series. The visual control was conducted using the GIS software (QGIS), which supports the use of raster and vector data, as the historical cadastral map sheets (raster) were overlapped with the vectorized cadastral map and further analyzed to determine the origin and the documentation of inconsistency. Each difference was individually analyzed by a visual comparison of the vectorized map and the state of the map being vectorized–paper-based cadastral map. If the correctness of the vectorized data was confirmed, the condition of the historical cadastral map was further compared. If the cause of the difference was not noticed here either, the comparison of register data was continued. Thus, the source of the difference and the time when it was generated were discovered (Figure 3).
Visual control of inconsistency is performed by a cadastral expert utilizing data from different time series. The basis for the analyses is a vectorized cadastral map. In the first step, the cadastral map from which it is vectorized is loaded in background. The cadastral expert controls whether the determination of coordinates in vectorization is done correctly and whether the parcel ID is correctly read and entered on the vectorized cadastral map. If any of this is wrong, the expert completes the analysis, classifies the inconsistency, and corrects the error that caused the inconsistency. If everything is correct, the expert loads the historical cadastral map and analyzes whether an error was made when lithographing that map. Historical cadastral maps, if there are more than one, are analyzed sequentially backwards all the way to the oldest map. If the source of the inconsistency is not discovered, all maintenance and restoration work is done correctly, it means that the cause is in the cadastral survey.
All the inconsistencies were classified into four main sources. These were activities that were accomplished within the initial cadastral survey, lithography, vectorization, and maintenance. Criteria for classification into these main sources are derived from the process of establishment, documentation renewal, and maintenance of a cadastre. This classification includes all tasks where there was a possibility of making an error. As each of these processes occurred during different time periods, we noted when the inconsistency occurred as the years of initial surveys, lithography, vectorization, and last maintenance that were known using a joint information system [39]. Note that the date of last maintenance for some cadastral parcels was not provided, and these were marked as unknown. Moreover, the cadastral document where the error caused inconsistency was detected, and whether it was in the register or the cadastral map was identified. Both the datasets were compared because they could be associated by using the parcel ID. As the quality of analyzing the differences is dependent on experience of cadastral expert, recorded is also the personal assessment of confidence of analyzed cases, whether the expert was certain or uncertain in his/her assessment. To estimate the time required for such an analysis, the duration for solving each cadastral parcel inconsistency was also recorded.

Restricted and publicly available datasets were analyzed in this study. Publicly available data can be found here: https://oss.uredjenazemlja.hr/public/cadServices.jsp?action=dkpViewerPublic and https://mapire.eu/. Restricted data was obtained from State Geodetic Administration (https://dgu.gov.hr/) and National Archives in Split (http://www.das.hr/).

We thank the State Geodetic Administration and the National Archives in Split for the data they made available for the implementation of this research. 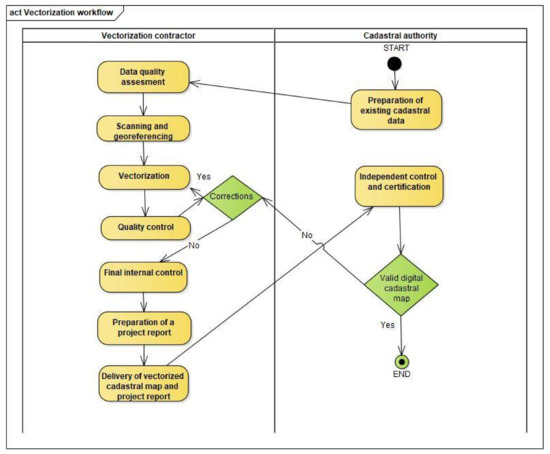 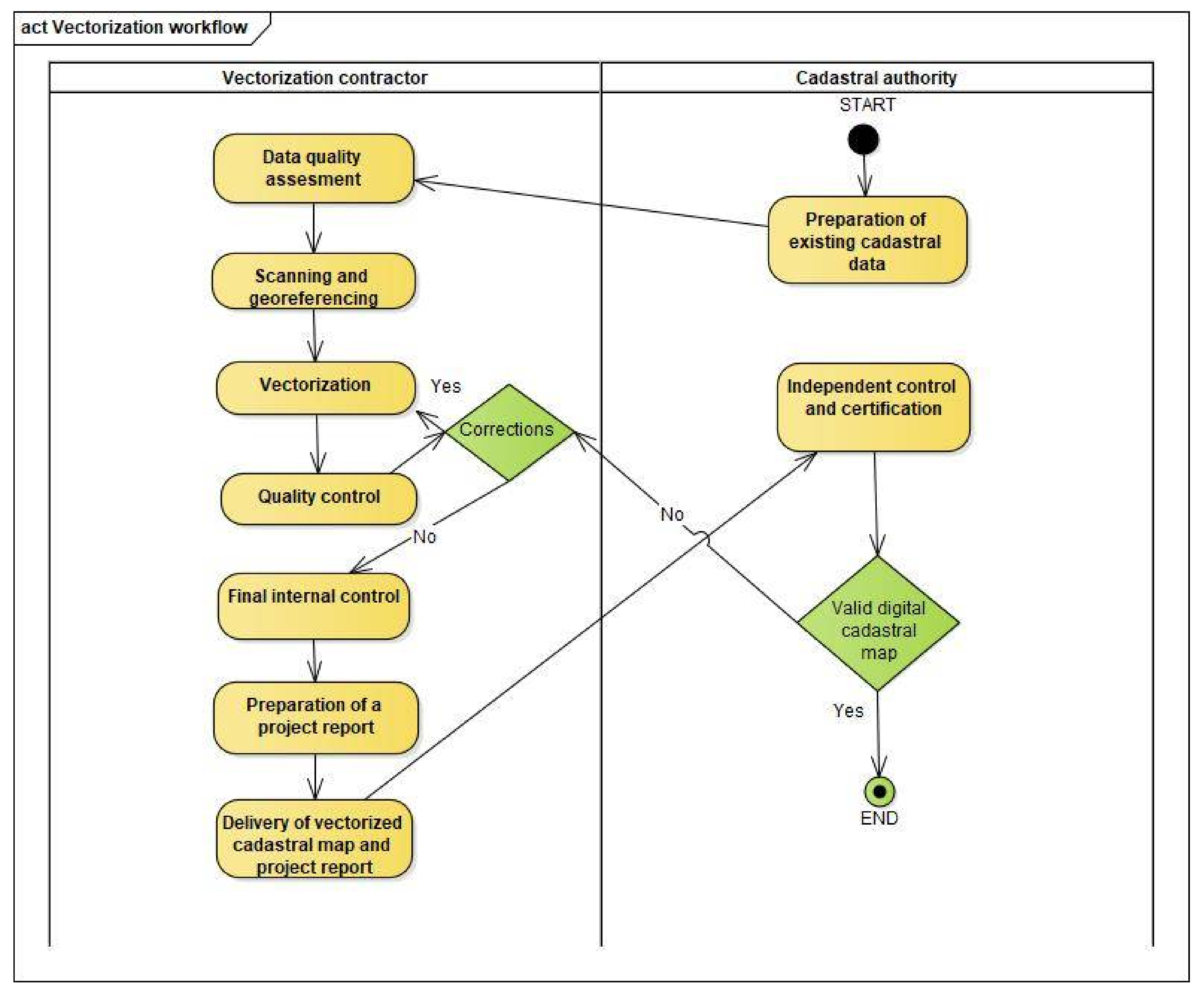 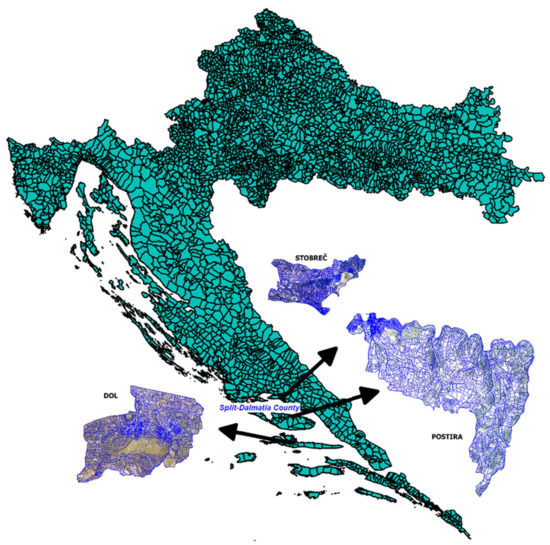 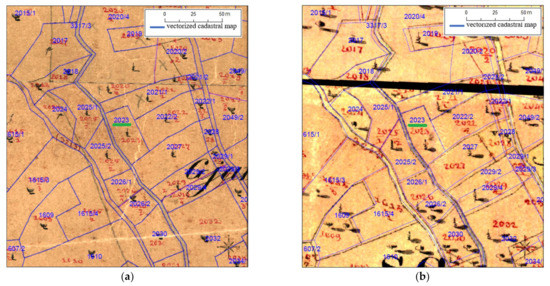 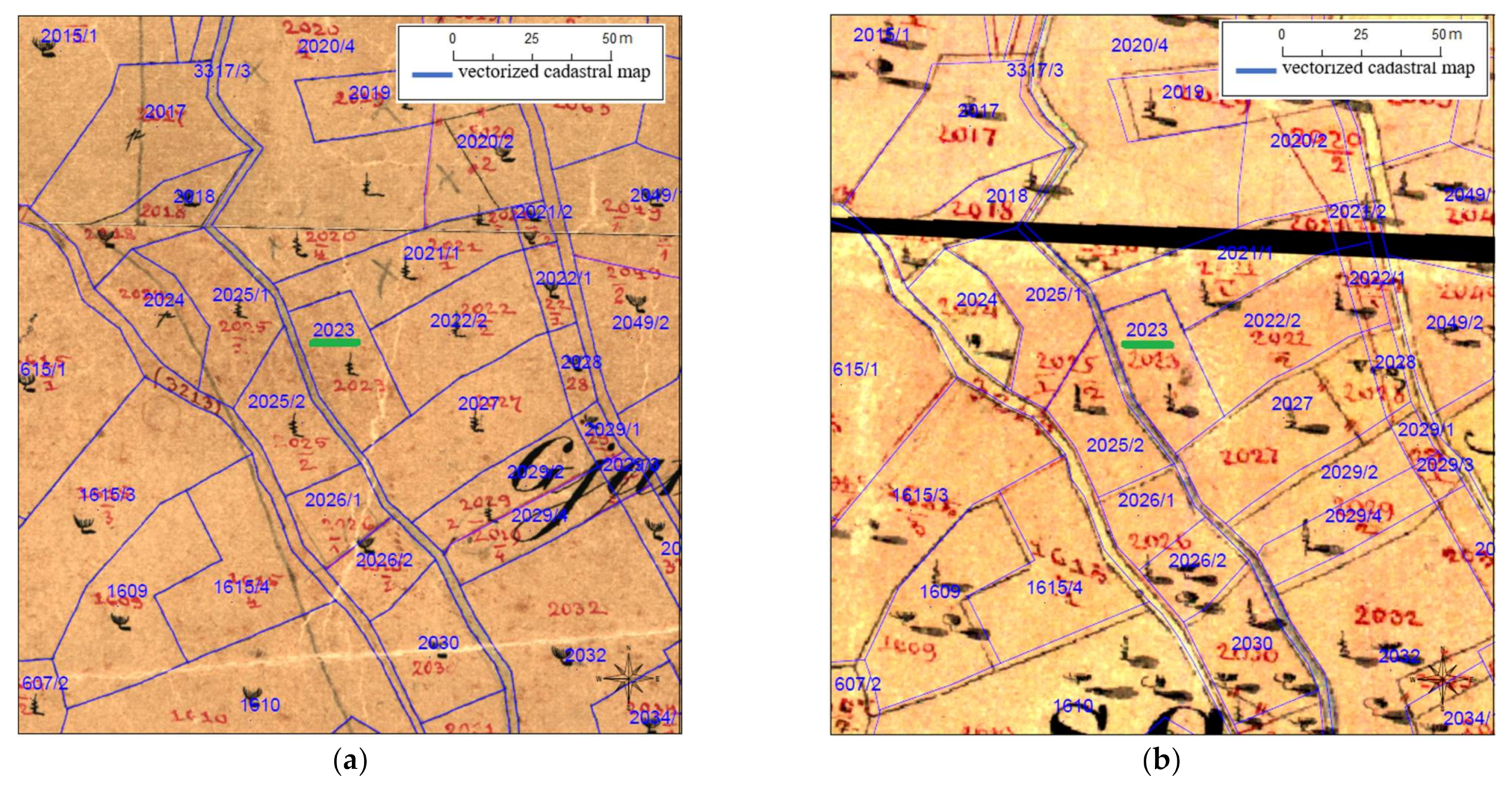 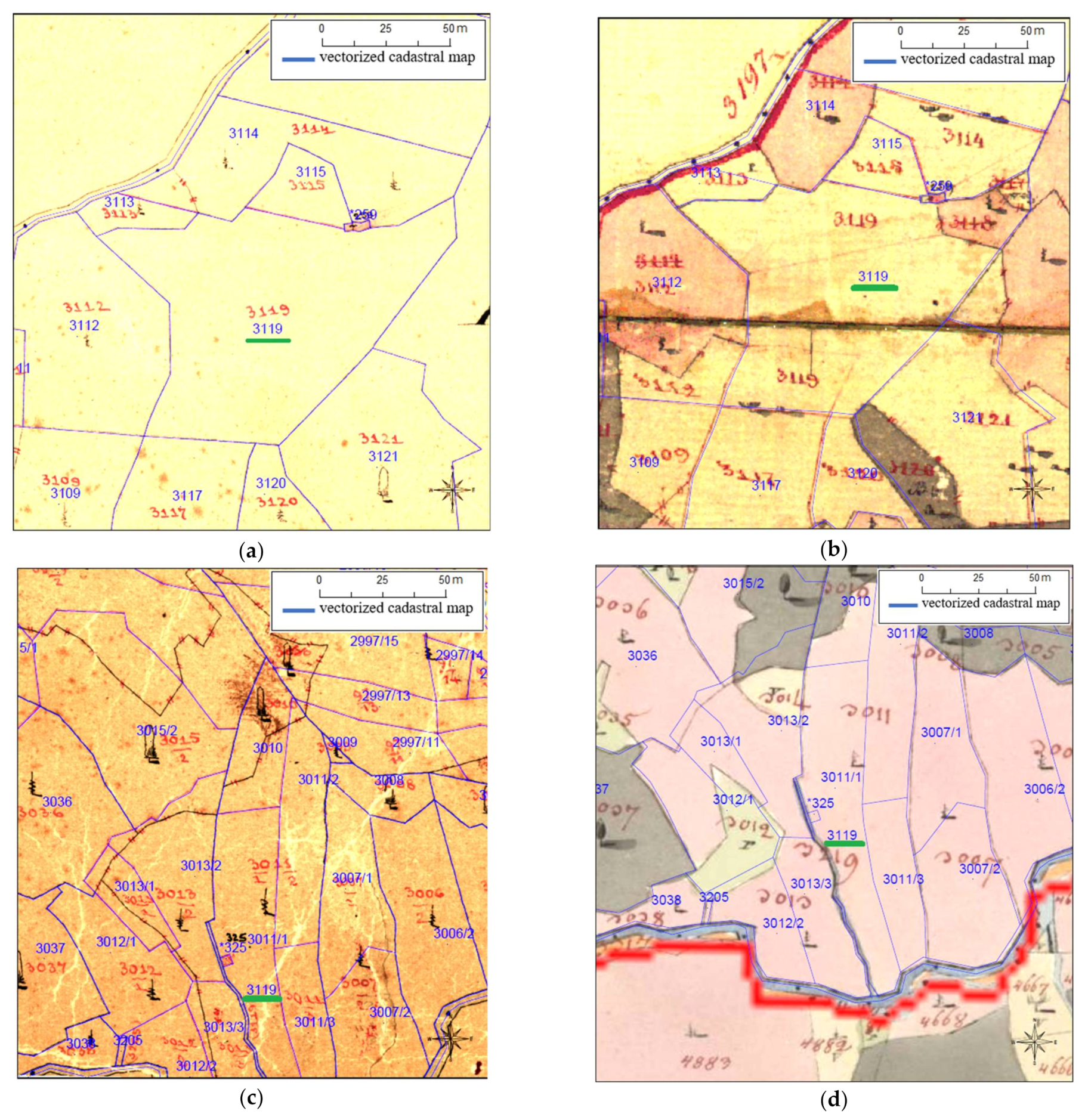 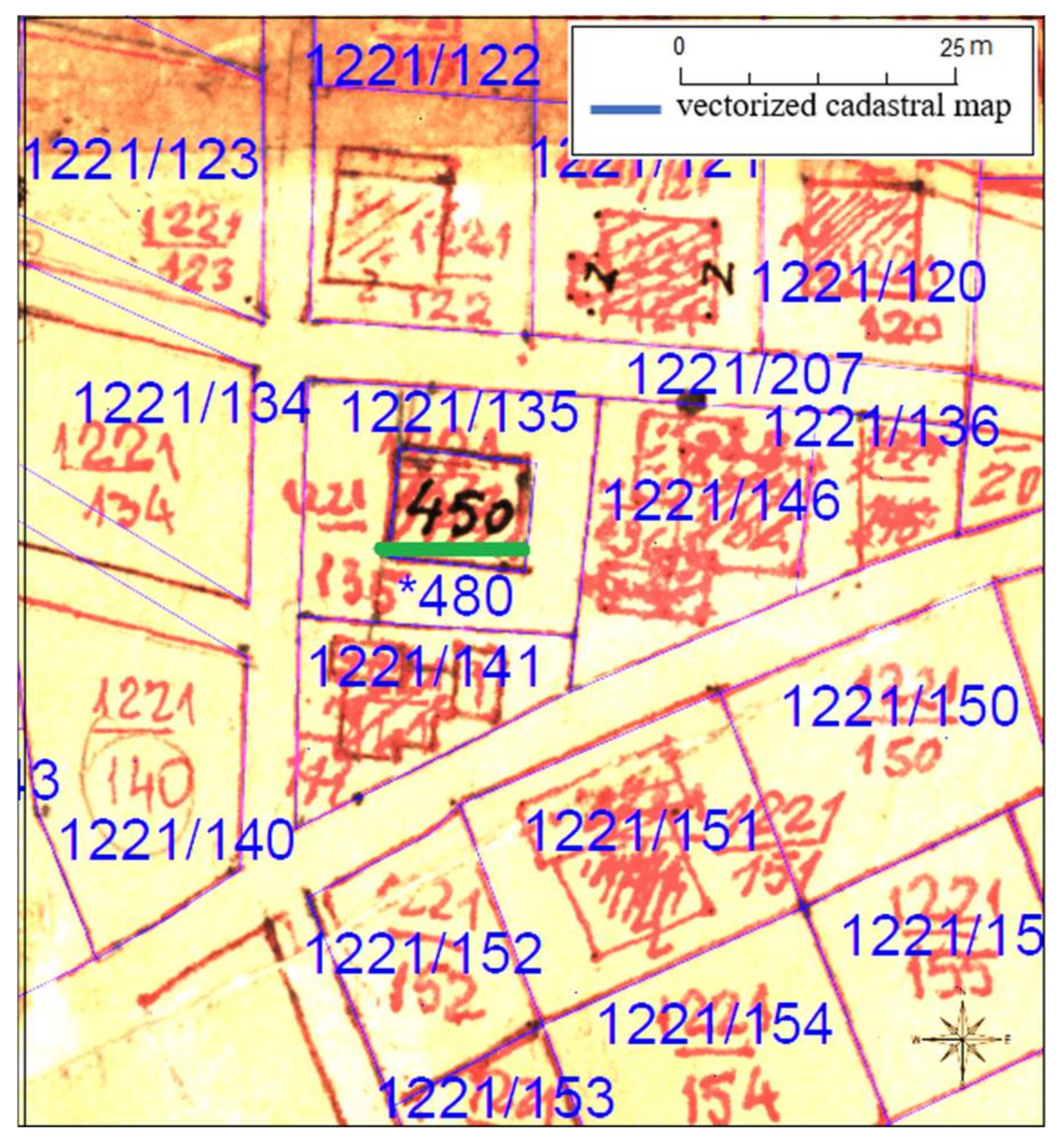 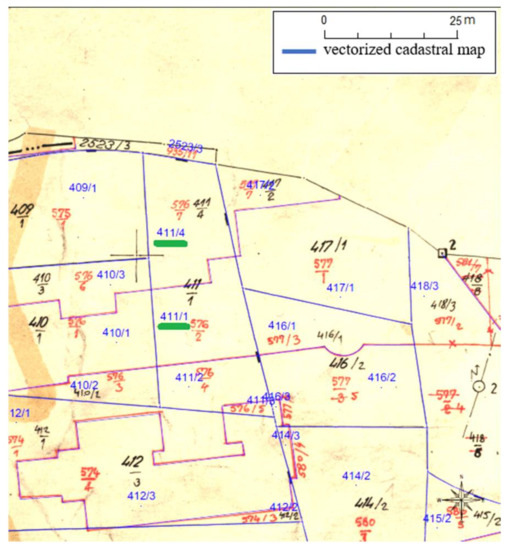