Modeling the Fate and Transport of Malathion in the Pagsanjan-Lumban Basin, Philippines

Exposure to highly toxic pesticides could potentially cause cancer and disrupt the development of vital systems. Monitoring activities were performed to assess the level of contamination; however, these were costly, laborious, and short-term leading to insufficient monitoring data. However, the performance of the existing Soil and Water Assessment Tool (SWAT model) can be restricted by its two-phase partitioning approach, which is inadequate when it comes to simulating pesticides with limited dataset. This study developed a modified SWAT pesticide model to address these challenges. The modified model considered the three-phase partitioning model that classifies the pesticide into three forms: dissolved, particle-bound, and dissolved organic carbon (DOC)-associated pesticide. The addition of DOC-associated pesticide particles increases the scope of the pesticide model by also considering the adherence of pesticides to the organic carbon in the soil. The modified SWAT and original SWAT pesticide model was applied to the Pagsanjan-Lumban (PL) basin, a highly agricultural region. Malathion was chosen as the target pesticide since it is commonly used in the basin. The pesticide models simulated the fate and transport of malathion in the PL basin and showed the temporal pattern of selected subbasins. The sensitivity analyses revealed that application efficiency and settling velocity were the most sensitive parameters for the original and modified SWAT model, respectively. Degradation of particulate-phase malathion were also significant to both models. The rate of determination (R2) and Nash-Sutcliffe efficiency (NSE) values showed that the modified model (R2 = 0.52; NSE = 0.36) gave a slightly better performance compared to the original (R2 = 0.39; NSE = 0.18). Results from this study will be able to aid the government and private agriculture sectors to have an in-depth understanding in managing pesticide usage in agricultural watersheds. View Full-Text
Keywords: soil and water assessment tool; pesticides; malathion; agricultural watershed; modified SWAT model soil and water assessment tool; pesticides; malathion; agricultural watershed; modified SWAT model
►▼ Show Figures 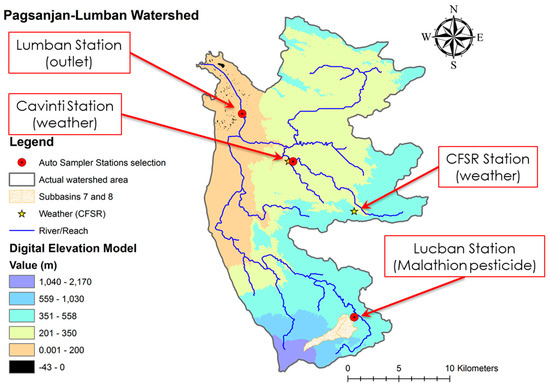