Nansi Lake has been seriously affected by intensive anthropogenic activities in recent years. In this study, an extensive survey on spatial variation, pollution assessment as well as the possible sources identification of major nutrients (Total phosphorus: TP, Total nitrogen: TN, and Total organic carbon: TOC) in the surface sediments of Nansi Lake was conducted. Results showed that the mean contents of TP, TN and TOC were 1.13-, 5.40- and 2.50- fold higher than their background values respectively. Most of the TN and TOC contents in the surface sediments of Nansi Lake were four times as high or higher and twice as high or higher than the background values except the Zhaoyang sub-lake, and the spatial distribution of TN and TOC contents were remarkably similar over a large area. Nearly all the TP contents in the surface sediments of Nansi Lake were all higher than its background values except most part of the Zhaoyang sub-lake. Based on the enrichment factor (EF) and the organic pollution evaluation index (Org-index), TP, TOC and TN showed minor enrichment (1.13), minor enrichment (2.50) and moderately severe enrichment (5.40), respectively, and most part of the Dushan sub-lake and the vicinity of the Weishan island were in moderate or heavy sediments organic pollution, while the other parts were clean. Moreover, according to the results of multivariate statistical analysis, we deduced that anthropogenic TN and TOC were mainly came from industrial sources including enterprises distributed in Jining, Yanzhou and Zoucheng along with iron and steel industries distributed in the southern of the Weishan sub-lake, whereas TP mainly originated from runoff and soil erosion coming from agricultural lands located in Heze city and Weishan island, the local aquacultural activities as well as the domestic sewage discharge of Jining city. View Full-Text
Keywords: sediments nutrients; spatial variation; pollution; sources; Nansi Lake sediments nutrients; spatial variation; pollution; sources; Nansi Lake
►▼ Show Figures 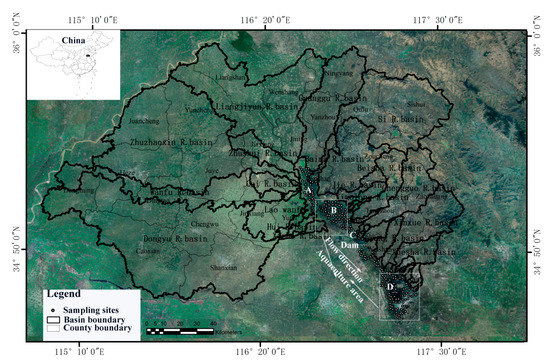