Water Use and Yield of Soybean under Various Irrigation Regimes and Severe Water Stress. Application of AquaCrop and SIMDualKc Models

The exchange between the vadow zone and shallow groundwater is an important process in a water cycle. In particular, phreatic evaporation is the major form of groundwater consumption. It is one of the main water sources of regional evapotranspiration in shallow groundwater areas [1], which can result in soil salinization [2,3,4], and can also affect the accuracy of water resource evaluation [5]. Groundwater behavior in permafrost dominated regimes is an understudied topic that will become increasingly important as permafrost is an effective barrier to recharge [6]. Due to the dynamic change of soil water and groundwater, the exchange between soil water and groundwater is bidirectional, that is, downward percolation of soil water recharges the groundwater. Alternately, upward migration from the groundwater, termed Phreatic Evaporation, recharges soil water where it may be more readily consumed by evaporation. For many years, many investigators in soil physics, hydrogeology, irrigation and drainage, and surface water and water source science have conducted a great deal of research on the mechanisms and laws of phreatic evaporation. The research methods are mainly field observations [7,8,9,10,11], theoretical analysis [12,13,14,15], and numerical simulation [16]. Due to the complexity of the soil water movement process, the theoretical analyses are conducted mostly for stable evaporation conditions. The concerns and scopes of application about phreatic evaporation are expanding constantly, and the relevant studies have made new progress; however, the research carried out has mainly focused on unfrozen soil. Generally, the factors which influence groundwater recharge for soil water are surface soil evaporation, plant transpiration [17], and meteorological factors [18] in a nonfreezing period. During freezing periods, the soil freezing and temperature gradients can result in phreatic evaporation and a higher soil water content.
Soil moisture availability is a crop development constraint [19,20,21,22], and soil moisture dynamics influence groundwater evaporation [23,24]. The investigation of soil moisture migration is difficult because of the complex nature of the transport of water and heat during the freeze-thaw period [25,26]. Many studies have used a variety of models to simulate soil water migration during the soil freeze-thaw process [27,28,29,30,31]. Some researchers have tried to take advantage of migrated water during the seasonal freeze/thaw to improve the spring soil moisture content of farmland [32], and to increase the survival rate or productivity of plantations. However, little attention has been paid to the transfer of soil water as part of the freeze-thaw process.
Musa et al. [33] determined the characteristics of soil water migration in dunes and interdune areas, and discussed its potential application through investigating the moisture content of shallow soil during the soil freeze-thaw period. Beldring et al. [34] investigated the spatial variation of soil moisture in an unsaturated zone with shallow groundwater, without considering the effect of freezing and thawing. In shallow groundwater areas, soil moisture in an unsaturated zone is affected by many factors during the process of soil freezing and thawing [35]; the most important factors are soil temperature [36], and GTD [37]. Many scholars have conducted laboratory and field studies on the influence of GTD on soil water migration in a nonfreezing period [38,39]. However, due to the constraints of field experiments, most studies on soil water above shallow groundwater during a freeze-thaw period have been conducted in a laboratory setting [40].
The driving force that makes unfrozen water migrate in frozen soil is the soil-water potential gradient. The soil liquid water gradually phases into ice when soil temperature declines, so that the soil-water potential of the frozen layer decreases [31,41]. So, the unfrozen soil water migrating to upper soil layers, driven by the soil-water potential gradient, results in the continuous inflowing from shallow groundwater to an unsaturated zone. An inadequate understanding of soil moisture in shallow groundwater and phreatic evaporation during a freeze-thaw period promoted this study. The research would be of great significance for water resource assessment, the conversion of farmland water, and the prevention of saline land.
The objective of this study is to: (1) investigate the effect of four different groundwater table depths (0.5, 1.0, 1.5, and 2.0 m) and two different soil textures (sandy loam and fine sand) on soil moisture migration during a freeze-thaw period; (2) reveal the effect of soil freezing on phreatic evaporation and determine the relationship between cumulative phreatic evaporation and freezing days during a freezing period; and (3) investigate the relationship between total phreatic evaporation and GTD during a freeze-thaw period using field-measured data.

The experiments were conducted at the Taigu Water Balance Experimental Field, which is 60 km away from the south of Taiyuan, Shanxi Province, in China. It is located in the east of the Jinzhong basin at approximately 37°26′ N, 112°30′ E at an altitude of 777 m. The area is characterized by a continental semi-arid climate with GTD of 25.0 m. The climate is characterized by heavy wind and little rain in spring, heavily concentrated rainfall in summer, continuous rain in autumn, and cold with a little snow in winter. The annual average temperature is 9.9 °C. Average annual precipitation is 415 mm, which mainly occurs from June to September, and the annual water surface evaporation potential is 1642 mm. The average relative humidity has been 74% and the average wind speed 0.9 m·s−1 for many years. The annual average frost-free period is about 200 days, and the maximum observed soil frost depth was 92 cm in 1960. During the test period (from November 2004 to March 2005), the total solar radiation was 127.2 kJ·cm−2, and the lowest observed total solar radiation was 18.93 kJ·cm−2 in December. January was the coldest month, with a mean air temperature of −6.8 °C average daily; the minimum air temperature was −15.7 °C on 31 December 2004. The variation of solar radiation and the average daily temperature during the test period are shown in Figure 1.
The test equipment included lysimeters and neutron probes. There were eight lysimeters (Figure 2) with a circle cross-section of 0.5 m2 and installed at intervals of 0.5 m. The soil texture of the unsaturated zone in the lysimeters was sandy loam (four lysimeters with the same texture for four different GTDs) and fine sand (the other four lysimeters with the same texture), which are homogeneous and representative soils of the Jinzhong basin and the Taiyuan basin in China, respectively. The sandy loam has a specific yield of 0.08 m3·m−3 and prosity of 0.53 m3·m−3. The fine sand has a specific yield of 0.12 m3·m−3 and prosity of 0.45 m3·m−3. The physical characteristics of the soils are shown in Table 1.
The GTD within the lysimeters was set at 0.5, 1.0, 1.5, and 2.0 m respectively, and the surface was exposed to the atmospheric conditions during the experiment. The phreatic evaporation was monitored by lysimeters every day through a Mariotte bottle in the underground room. The frozen soils are characterized by the coexistence of liquid water and ice. Many methods have been used for measuring liquid water content, such as time-domain reflecometry (TDR) [42,43] and nuclear magnetic resonance (NMR) [44], as well as ice content, such as dielectric spectroscopy [45] and the heat pulse probe [46], in frozen soil. Some investigators have combined two methods together to infer the total water content in frozen soil; for example, gamma ray and TDR [47], and neutron probe and TDR [48]. However, TDR is not feasible for lysimeters because it will destroy the monitoring of evaporation and infiltration; the neutron probe has a low and variable degree of spatial resolution. The influence radius of a neutron probe is generally between 15 cm in wet soil to 70 cm in dry soil [49]. Therefore, the neutron probe is suitable for our field lysimeters with a radius of 40 cm. Low temperature and soil freezing has no apparent effect on neutron probe readings in frozen soils [50], and the readings should be insensitive to variations in liquid soil water content, but dependent on the total soil water content [51,52]. Therefore, for measuring total soil water content, we used a neutron probe (calibrated by the gravimetric method) and monitored intervals of 10 cm vertically every month on the 1st, 6th, 11th, 16th, 21st, and the 26th at 8:00 a.m. Further monitoring was conducted at 2:00 p.m. when a rapid increase in soil freezing depth was observed.

3.1. The Soil Freezing and Thawing Process at the ExperimentalStation

The soil freezing and thawing process at the experimental station can be divided into three main stages according to the characteristics of soil freezing and thawing [53,54,55]. These are: the unstable freezing stage (from 11 November to 24 December 2004), the stable freezing stage (from 25 December 2004 to 12 February 2005), and the thawing stage (from 13 February to 19 March 2005). The maximum depth of the frozen soil was 60 cm during the test period. The soil freezing and thawing process at the experimental station is shown in Figure 3.
The temperature and solar radiation decreased gradually after November, and the surface soils began to freeze on 11 November. The surface soil experienced several diurnal cycles (thawing during the day and freezing at night) during the unstable freezing stage, and the maximum depth of the soil frost was 11 cm. With the decline of air temperature and the accumulation of negative surface temperatures, the soil entered the stable freezing stage on 25 December, during which the frozen layer gradually developed downward. The maximum freezing rate was up to 3.0 cm per day, and the frozen layer reached a maximum of 60 cm on 6 February. During the thawing stage, as the air temperature rose, the frozen soil water began to thaw downward from the surface and upward from the maximum frozen front (referred to as bidirectional thawing), and the surface soil experienced several freeze-thaw cycles again.

3.2.The Characteristics of the Soil Moisture Distribution

3.3.3. Relationship between the Total Phreatic Evaporation and the GTD during the Freeze-Thaw Period 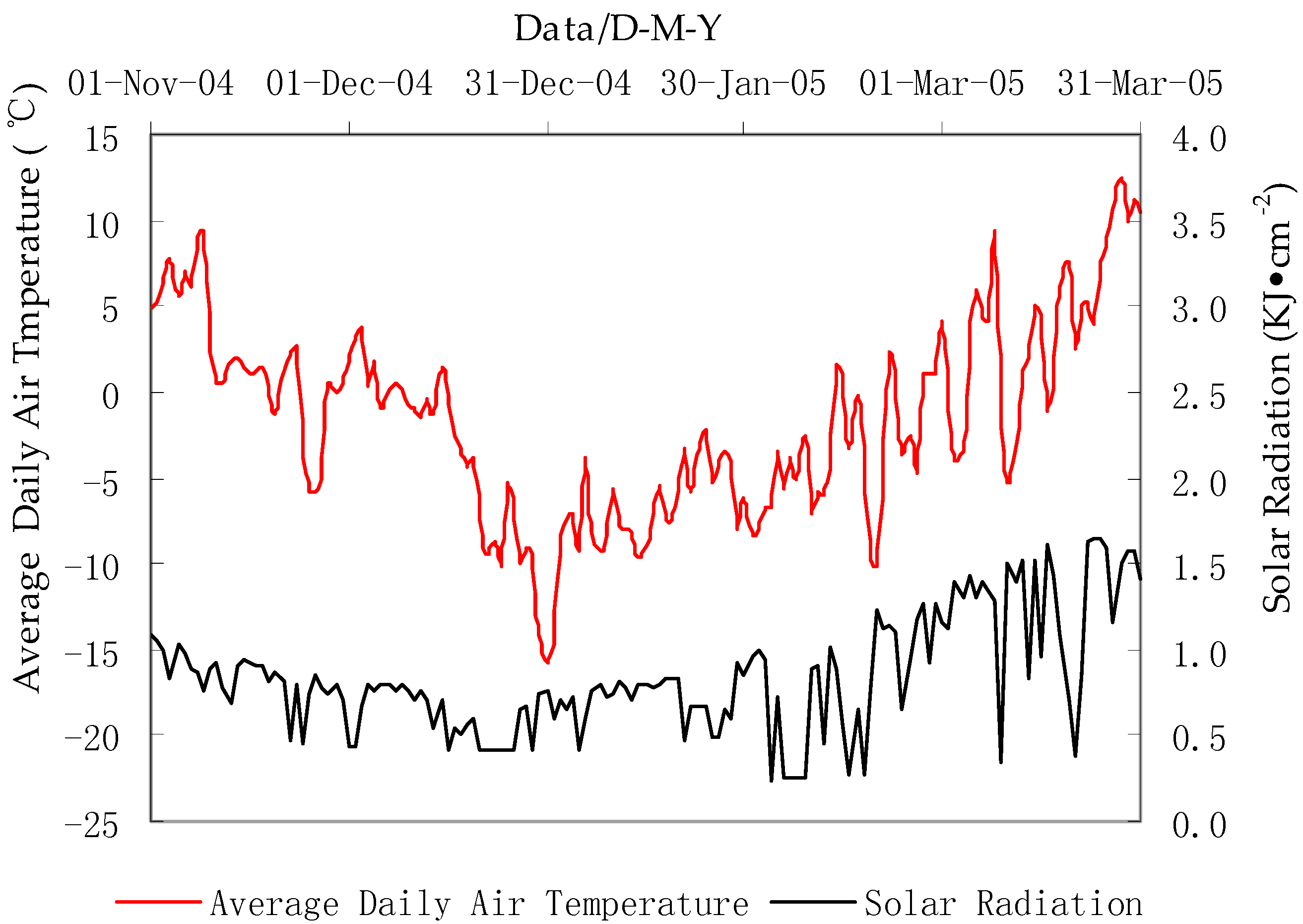 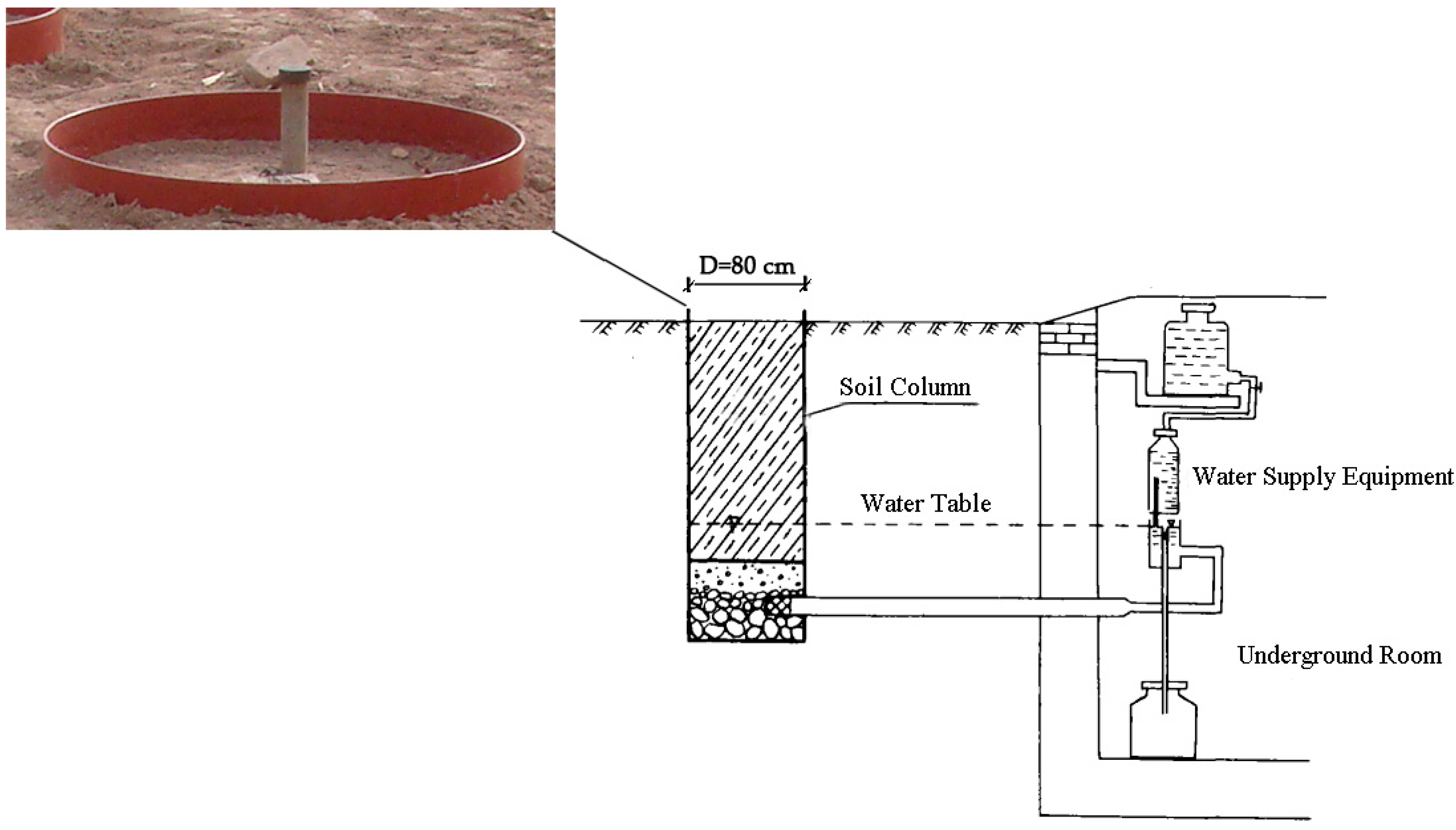 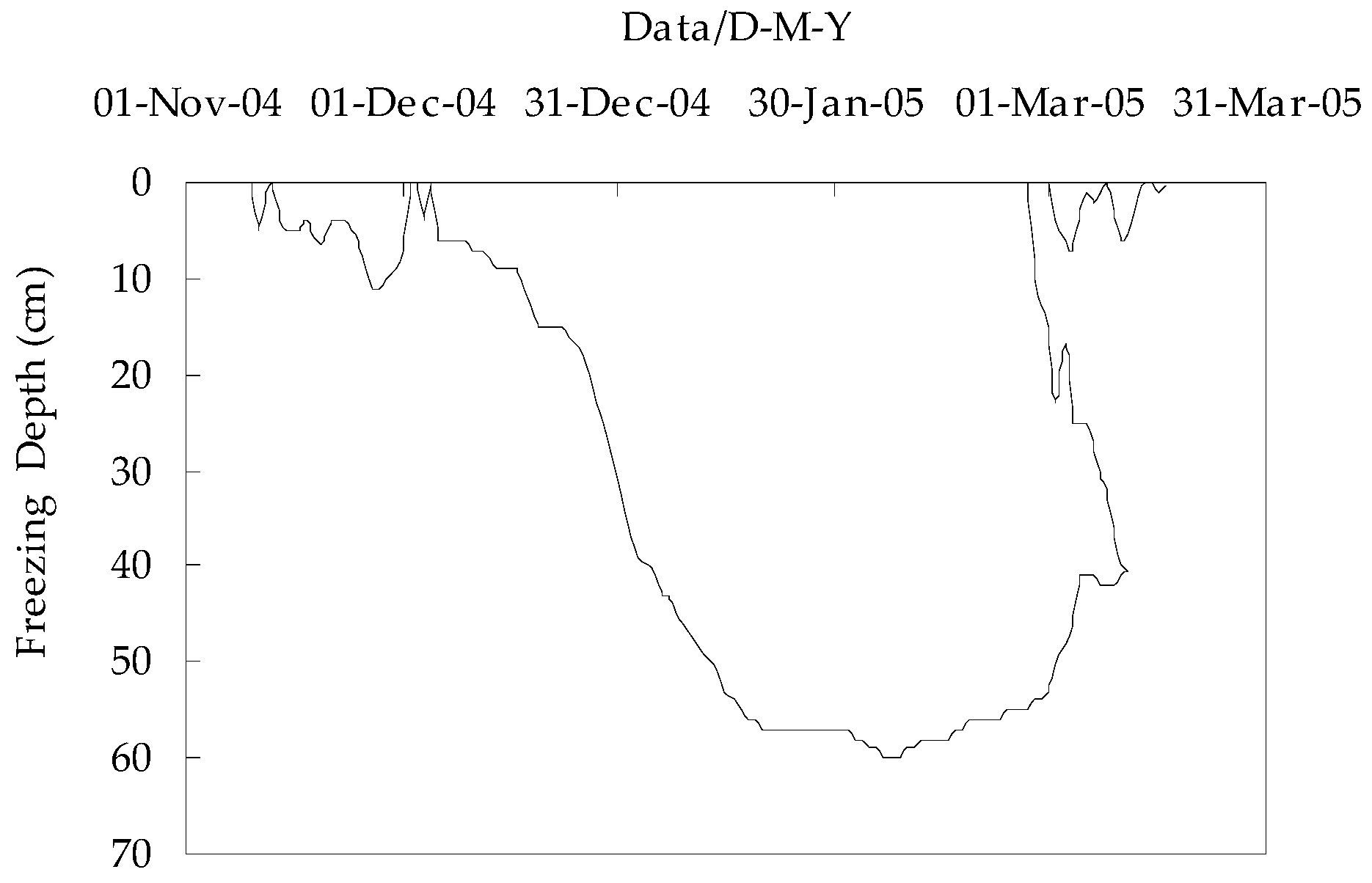 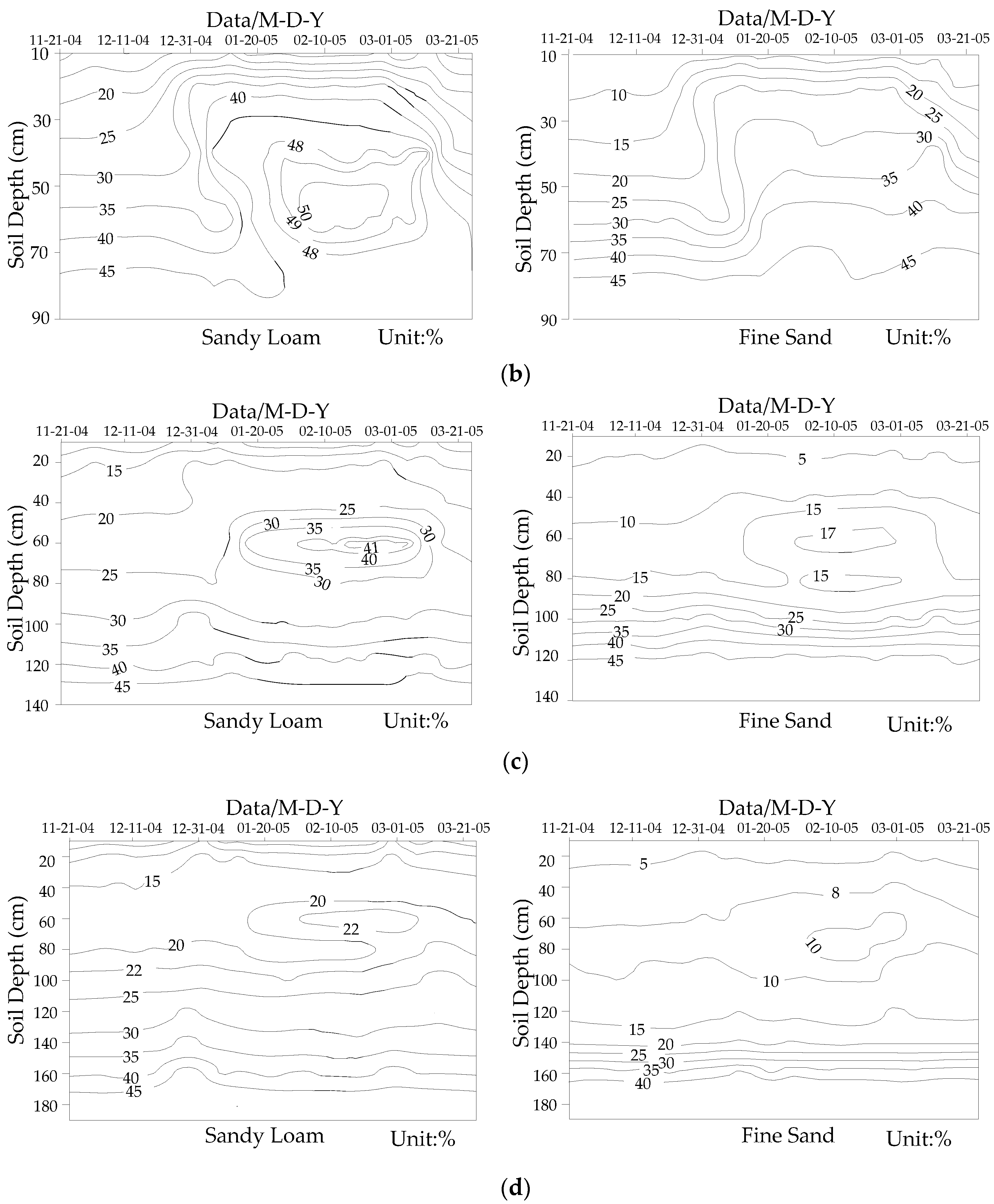 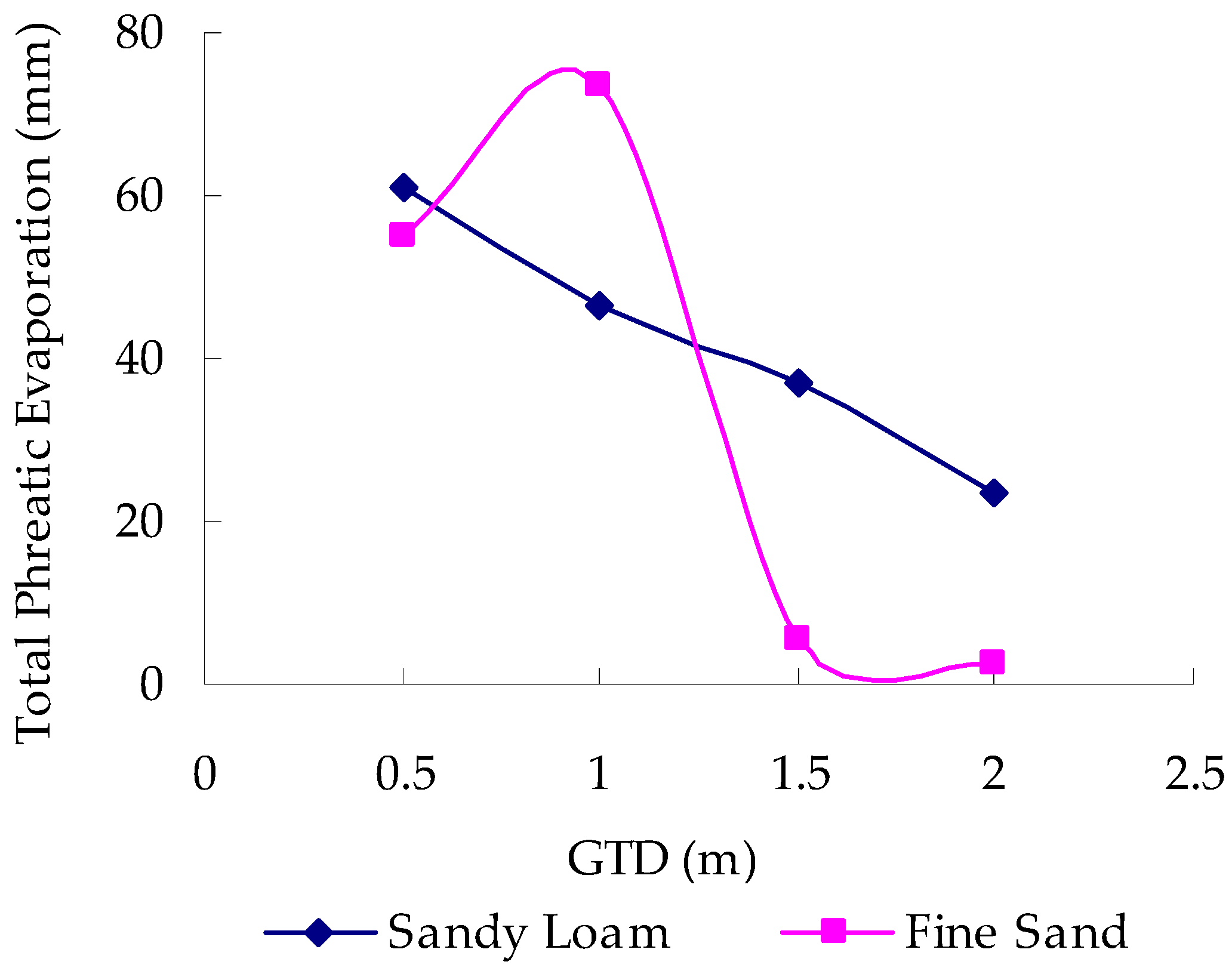