Spatial and Temporal Changes in Temperature, Precipitation, and Streamflow in the Miyun Reservoir Basin of China
Previous Article in Journal

Examining the Relationship between Drought Indices and Groundwater Levels

Thorough characterization of the response of finite water resources to climatic factors is essential for water monitoring and management. In this study, groundwater level data from U.S. Geological Survey Ground-Water Climate Response Network wells were used to analyze the relationship between selected drought indices and groundwater level fluctuation. The drought episodes included in this study were selected using climate division level drought indices. Indices included the Palmer Drought Severity Index, Palmer Hydrological Drought Index, and Standardized Precipitation Index (SPI-6, 9, 12, 24). Precipitation and the average temperature were also used. SPI-24 was found to correlate best with groundwater levels during drought. For 17 out of 32 wells, SPI-24 showed the best correlation amongst all of the indices. For 12 out of 32 wells, SPI-24 showed correlation coefficients of −0.6 or stronger; and for other wells, reasonably good correlation was demonstrated. The statistical significance of SPI-24 in predicting groundwater level was also tested. The correlation of average monthly groundwater levels with SPI-24 does not change much throughout the timeframe, for all of the studied wells. The duration of drought also had a significant correlation with the decline of groundwater levels. This study illustrates how drought indices can be used for a rapid assessment of drought impact on groundwater level. View Full-Text
Keywords: groundwater; drought; SPI; correlation; aquifers groundwater; drought; SPI; correlation; aquifers
►▼ Show Figures 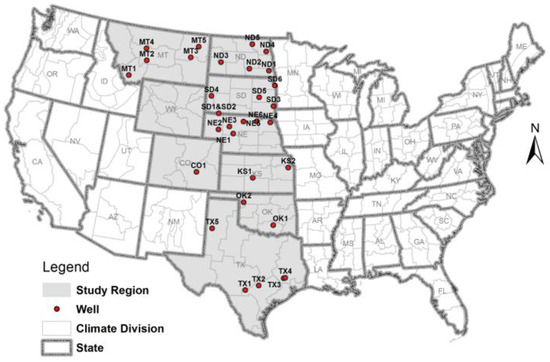