Distribution and Potential Health Risks of Arsenic, Selenium, and Fluorine in Natural Waters in Tibet, China
Next Article in Special Issue

Impacts of Climate Change on Riverine Ecosystems: Alterations of Ecologically Relevant Flow Dynamics in the Danube River and Its Major Tributaries

Paleohydraulic Reconstruction of Modern Large Floods at Subcritical Speed in a Confined Valley: Proof of Concept

The present study aims to show the accuracy of paleoflood reconstruction techniques based on two-dimensional (2D) hydraulic modelling of a large flood. Using this reconstruction technique, we determined trends in flood stages over time in a regulated river. A stretch of the Guadalquivir River (Southern Spain) was selected as the study site. High-resolution orthophotos and LiDAR (Light Detection and Ranging) elevations were acquired just after modern floods. They were used for the identification and location of stage indicators. In addition, water gradients were estimated from gauging records, documentary information and paleostage indicators (PSIs) in two situations: (i) pre-vegetation encroachment; and (ii) post-vegetation encroachment due to upstream impoundment. Standard two-dimensional, flow depth-averaged equations over fixed beds were used in the hydraulic modelling. In a first stage, long records of instrumental data at gauging stations and documentary evidence of flood levels served to calibrate the input parameters of the hydraulic model. In a second stage, paleoflood signatures within sedimentary and botanical sequences served to verify the flood stages in the numerical simulations not only at the river reach where instrumental data exist but also in the downstream river reach. Interestingly, the rating curve obtained from the combined use of documentary information and imagery was nearly as accurate as gauging measurements. The thoughtful comparison of 2D modelled hydraulic variables against inferred values from PSIs and instrumental data supports the paleoflood reconstruction method over fixed beds. Vegetation encroachment provoked 10% deeper floods at the water discharge of 2000 m3s−1, which implied an increase of Manning’s roughness coefficient from 0.04 to 0.055 sm−1/3 in less than 15 years. View Full-Text
Keywords: paleohydrology; backwater effect; flood risk; historical floods; Guadalquivir River paleohydrology; backwater effect; flood risk; historical floods; Guadalquivir River
►▼ Show Figures 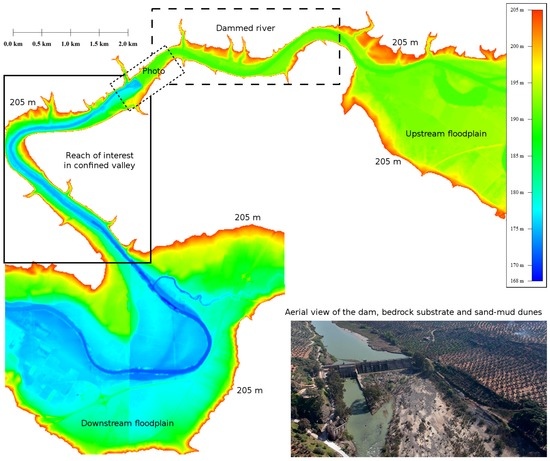 
Bohorquez, Patricio. 2016. "Paleohydraulic Reconstruction of Modern Large Floods at Subcritical Speed in a Confined Valley: Proof of Concept." Water 8, no. 12: 567.