Residential Water Demand in a Mexican Biosphere Reserve: Evidence of the Effects of Perceived Price
Next Article in Special Issue

Restoration of Shallow Lakes in Subtropical and Tropical China: Response of Nutrients and Water Clarity to Biomanipulation by Fish Removal and Submerged Plant Transplantation
Previous Article in Journal

The Effect of Artificial Recharge on Hydrochemistry: A Comparison of Two Fluvial Gravel Pit Lakes with Different Post-Excavation Uses in The Netherlands

Long-Term Trends and Temporal Synchrony in Plankton Richness, Diversity and Biomass Driven by Re-Oligotrophication and Climate across 17 Danish Lakes

A two-decade (1989–2008) time series of lake phyto- and zooplankton, water characteristics and climate in 17 Danish lakes was analysed to examine the long term changes and the effects of lake restoration efforts. The analyses of the pair-wise correlations across time series revealed a strong synchrony in climatic variables among the lakes. A significant, but weak increase in air temperature was observed and resulted in a corresponding increase in surface water temperature only in summer. Lake physico-chemical variables had weaker synchrony than climatic variables. Synchrony in water temperature and stratification was stronger than lake chemistry as the former is mostly affected by atmospheric energy flux. Synchrony in the taxonomic richness of the plankton groups and phytoplankton biomass was apparent, to a similar degree as observed for lake chemistry. The synchrony and the temporal trends in lake chemistry and plankton were more pronounced for the lakes with strong re-oligotrophication. Phytoplankton biomass decreased and plankton richness increased in these lakes, with a shift from Chlorophyta dominance towards more heterogeneous phytoplankton communities. Notably, a widespread significant positive trend in plankton richness was observed not only in lakes with strong re-oligotrophication but across all lakes. The widespread increase in plankton richness coincided with widespread decrease in phosphate and total nitrogen concentrations, as well as with the trends in climate indicating a likely joint effect of nutrient reduction and climate in driving lake plankton. However, temporal changes and synchrony as well as the recovery of richness and composition of lake plankton more coherently corresponded with the nutrient loading reduction across the Danish landscape, while the role of climate control of the lake plankton was less pronounced.
Keywords: temporal coherence; zooplankton; phytoplankton; re-oligotrophication; lake recovery; lake restoration; plankton diversity temporal coherence; zooplankton; phytoplankton; re-oligotrophication; lake recovery; lake restoration; plankton diversity

Eutrophication and climate change are the two major global stressors of freshwater lakes in recent decades. Eutrophication has been widely recognised as a serious problem due to the resulting notorious toxic algae blooms and low water clarity [1,2]. Consequently, various restoration measures have been implemented in different parts of the world, especially after the 1970s and 1980s [3,4,5]. At the same time, climate change has also been widely acknowledged as an important factor affecting freshwater ecosystems [6], especially due to the trends observed in lake physical characteristics [7]. Most importantly, climate warming is proposed to mimic and worsen the effects of eutrophication [8,9,10]. Therefore, understanding the extent and coherence of long-term ecosystem response to the changes in climate and eutrophication/re-oligotrophication is fundamental for lake conservation, restoration and management [11].
Effects of eutrophication have been widely documented in lakes. The most pronounced effects are increased phytoplankton biomass and associated degradation of water quality, as well as decreased diversity in lake plankton and changes in plankton community structure [12]. Reduction in nutrient concentrations produced by lake restoration efforts has also created marked responses in plankton biomass and community composition [5,13,14,15,16].
Long-term climate changes can also induce biotic and abiotic responses of lake ecosystems. For example, in the last decades, trends towards warmer lake water [17,18,19,20], changes in thermocline depth and delay in turnover [21] as well as alterations in lake-catchment interactions [22] have been documented. Furthermore, changes in plankton richness [23], phenology [24,25,26], community composition [27,28] and trophic interactions [29,30] have been recorded as a reaction to long-term warming.
Some studies have shown that nutrient changes have a stronger influence on lake plankton than long-term climatic alterations [31]. However, the response of plankton communities to nutrient reduction has sometimes been found to be weak or inconsistent in phytoplankton [27,32,33] and zooplankton [13,34,35]. Therefore, a joint effect of changes in nutrient concentrations and climate is more likely [16,36]. Overall, the scarcity of long-term, multiple-lake data sets has limited our understanding of the combined effects of a changing climate and nutrient concentrations on the diversity of plankton and functioning of lake ecosystems [23,37,38].
Lake biotic and abiotic characteristics may have coherent temporal changes (i.e., synchrony) in several lakes sharing the same landscape indicating the driving role of large scale factors like climate or catchment-scale anthropogenic effects. Few studies have examined synchrony in temporal environmental and ecological changes among lakes [7,39,40,41]. Climatic effects, especially in the form of energy fluxes (i.e., temperature, irradiance), are uniform across large spatial scales and can induce synchronous changes in physical characteristics of lake water as well as, albeit weaker, in chemical and biological parameters [7,39,42]. Factors affecting the exchange of matter, especially mediated through the landscape, have been recognised to weaken the synchrony in biotic and abiotic lake variables across large spatial scales due to catchment-specific variations [39,40]. However, changes in matter exchange, mostly of anthropogenic origin, like acidification [43], eutrophication and re-oligotrophication [23,27], can also induce synchrony in lakes, even at large scales.
We analysed long-term trends in phyto- and zooplankton as well as lake water physico-chemistry and climate in 17 Danish lakes between 1989 and 2008. Many of the study lakes were recovering from previous eutrophication during the monitoring period [44]. We first tested if temporal changes in lake environmental and ecological characteristics were synchronous between lakes using mean pair-wise Pearson correlations across time series of each variable. Second, we assessed if variables demonstrated significant long-term trends during the study period using Kendall tests. In parallel, we also examined plankton community composition using Non-Metric Multidimensional Scaling (NMDS) and tested for directional temporal changes in plankton community composition during the study period. To better elucidate the effects of re-oligotrophication and to disentangle the role of climatic trends, we divided the lakes into three groups according to changes in their annual average TP concentrations, reflecting the strength of re-oligotrophication: lakes with a strong decline (S), lakes with weak changes (W) and lakes with no change (N). The analyses were performed for all lakes together and for each group separately as well as for the whole year (excluding winter) and each season separately (spring: months 3–5, summer: months 6–8 and autumn: months 9–11). We expected that strong re-oligotrophication indicated by a strong TP decrease would induce long-term trends and strong synchrony in the S lakes. Consistent trends in all lakes, especially in the N and W lakes, would indicate influence of other large-scale factors such as climatic effects.

Climatic parameters exhibited significant, but weak long-term monotonic trends over the two decades (Table A2, Figure 2 and Figure A5). Air temperature had a significant positive trend for the whole year (excluding winter) and for each season separately (r = 0.05–0.09, P < 0.01), with the strongest trend observed in summer. Wind speed demonstrated a significant negative trend for the whole year and for each season (r = −0.05–−0.10, P < 0.01); the strongest trend occurring in spring. Precipitation showed a significant positive trend for the whole year and in summer (r = 0.02 and 0.05, P < 0.05). Irradiance had a significant positive trend only in spring (r = 0.07, P < 0.001). These trends coincided with a decrease in the NAO index (Figure 2). The trends in temperature, irradiance and precipitation were uniform across lakes (Figure A5). Only the trends in wind speed exhibited variation across lakes (Figure A5).
No significant long-term trend was detected in water column stability and surface temperature in the study lakes, when analysed for the whole year (Figure 4). However, strong long-term trends were observed in the annual time series of several lake chemical variables, especially a widespread decrease in N and P concentrations is observed (Figure 4). Notably, TN demonstrated a decreasing trend in all, but two W lakes and PO4 generally had a decreasing trend except in three lakes (Figure 4). NO3-2 decreased in all W, two N and two S lakes. NH4, SiO2 and pH showed no clear trend across the different lake groups; however, pH decreased for three S lakes. Alkalinity and Secchi depth increased and SS decreased in all S lakes. Overall, the decreasing trends in nutrient concentrations and the increasing trends in water clarity were pronounced in the S lakes. In the analyses of seasonal time series (Figure A6, Figure A7 and Figure A8), surface temperature exhibited a positive trend in 70% of the lakes in summer. The main patterns were similar between seasons for the remaining lake chemistry variables, however, the nutrient reduction was strongest in spring in all lakes. The negative trend in TP and PO4 was slightly weaker, while the increase in Secchi disk and decrease in SS were stronger in the S lakes, in summer than in the other lake groups.
The annual time series of plankton richness and biomass variables also exhibited strong long-term trends that reflected the patterns in lake physico-chemical variables (Figure 4). Generally, the trends in phytoplankton variables were more pronounced in the S lakes, whereas the zooplankton trends were similar across all lakes. Total phytoplankton biomass and Chl-a strongly decreased in all S lakes except for one, with only few inconsistent significant trends in the W and N lakes. Phytoplankton richness increased for all S and N lakes, albeit more strongly in the former. Notwithstanding the increases found in three S lakes, no clear patterns emerged for phytoplankton evenness. Zooplankton biomass did not show clear differences among lake groups, whereas zooplankton richness increased in all but two lakes, whilst evenness decreased in 65% of the lakes. Richness of all the main groups of phytoplankton, except CYA and CHR, increased in the S lakes. CHL richness increased in all N lakes, while CRY richness increased in all, but two W lakes and one N lake. Both CHL biomass and dominance decreased in the S lakes, while the total contribution of all rare groups as well as the biomass of DIN, CRY and EUG increased. In contrast, CYA dominance increased in four S lakes. Richness of all the main groups of zooplankton increased in 90% of the lakes, without any pattern in biomass. However, CLA dominance increased in six lakes, with a decrease in only one lake, while ROT dominance decreased in all N lakes. Seasonally (Figure A6, Figure A7 and Figure A8), the negative trend in phytoplankton biomass was strongest in spring, while the positive trend in phytoplankton richness and the negative trend in Chl-a were strongest in summer in the S lakes.
The generally increasing trend in plankton richness also appeared in the annually pooled plankton communities (Figure 5). Phyto- and zooplankton richness of pooled communities correlated positively with year in 40% and 75% of the lakes, respectively.

We are grateful for the work of numerous experts who performed the collection and counting of samples during two decades of monitoring. We consider this work a contribution of the Center for Informatics Research on Complexity in Ecology (CIRCE), funded by Aarhus University; Aarhus University Research Foundation under the AU IDEAS program and the EU FP-7 Theme 6. Project REFRESH (Adaptive Strategies to Mitigate the Impacts of Climate Change on European Freshwater Ecosystems, Contract No. 244121). We thank Anne Mette Poulsen for linguistic corrections and Lisbet Sortkjær for database assistance. 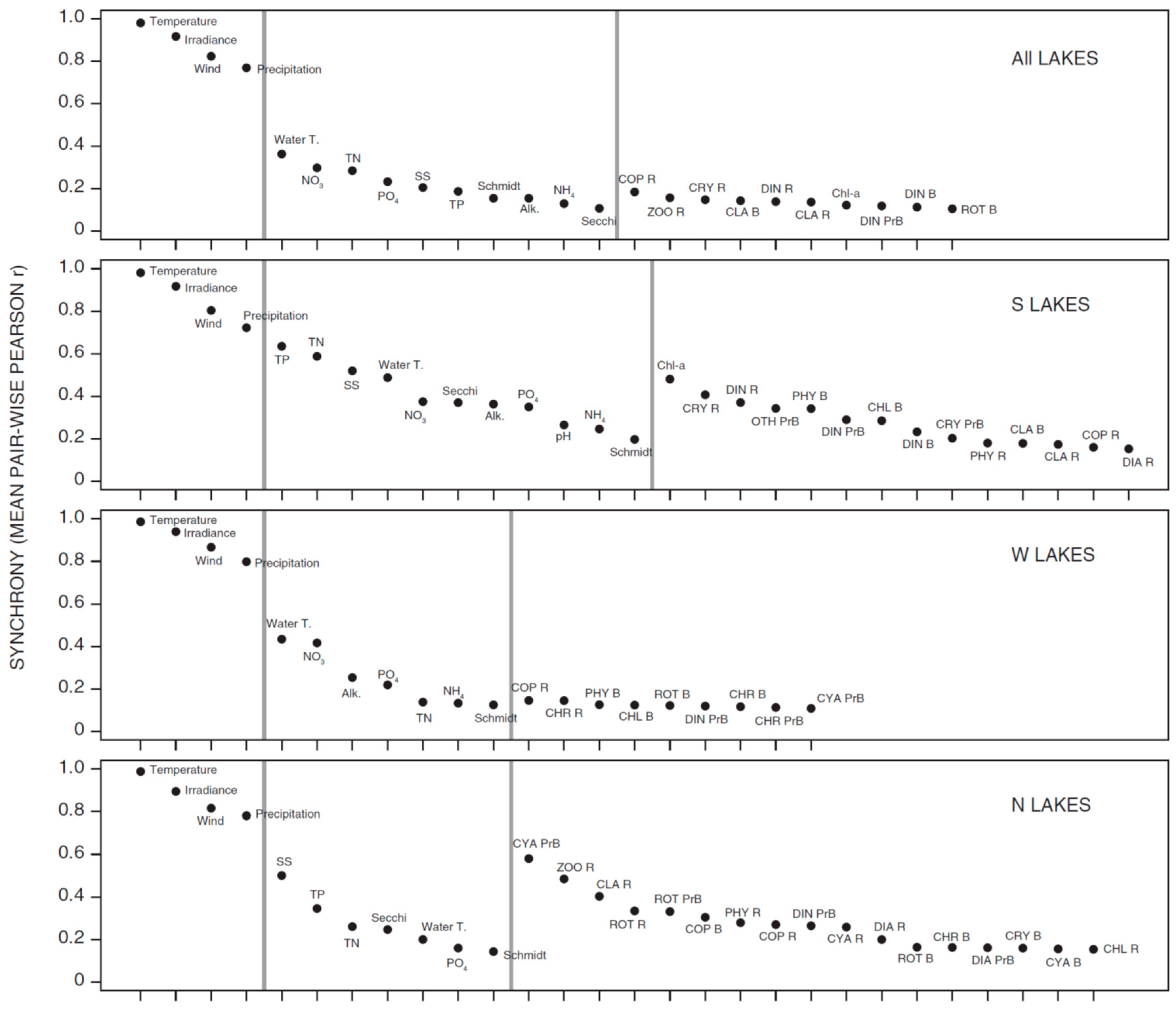 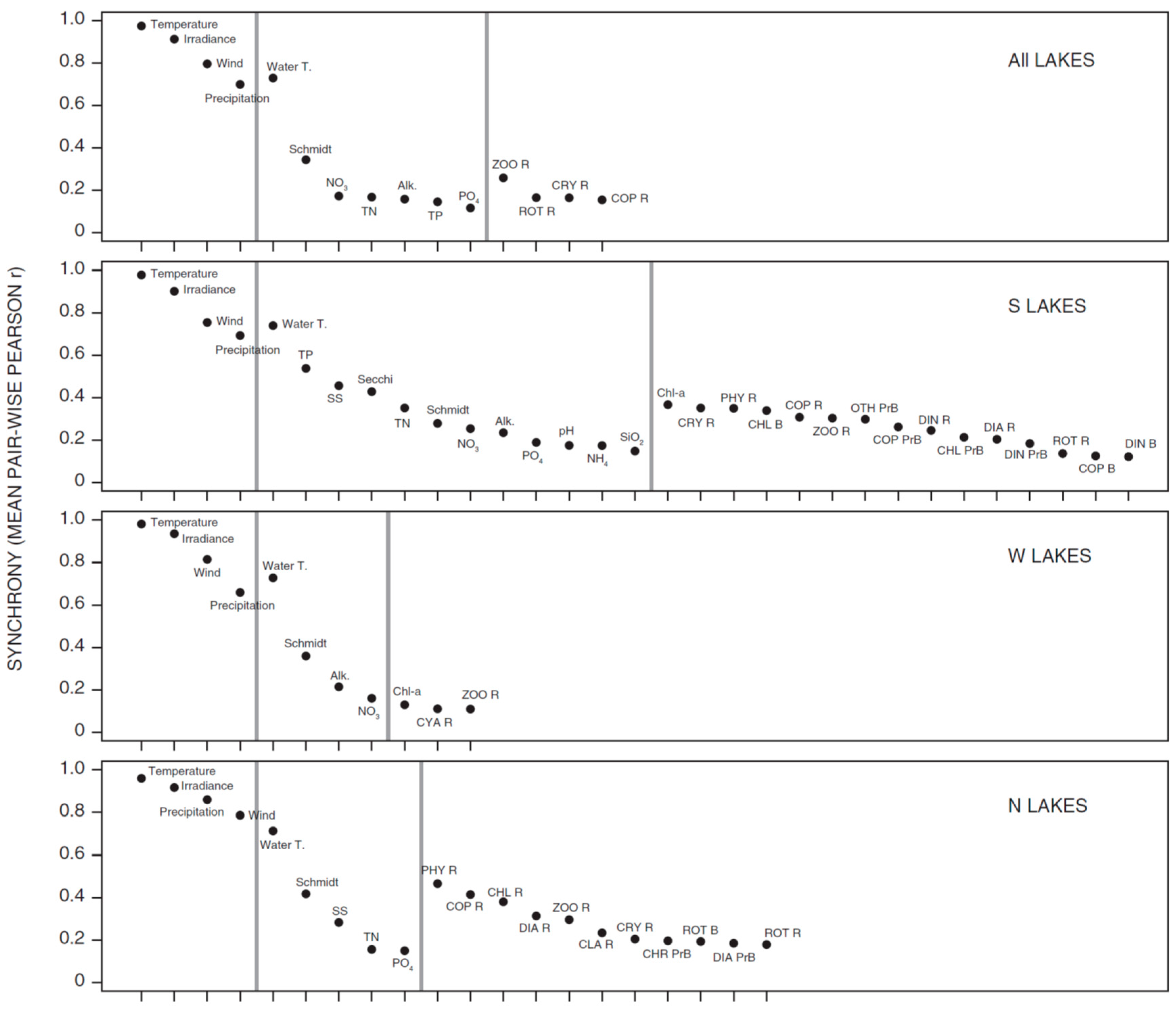 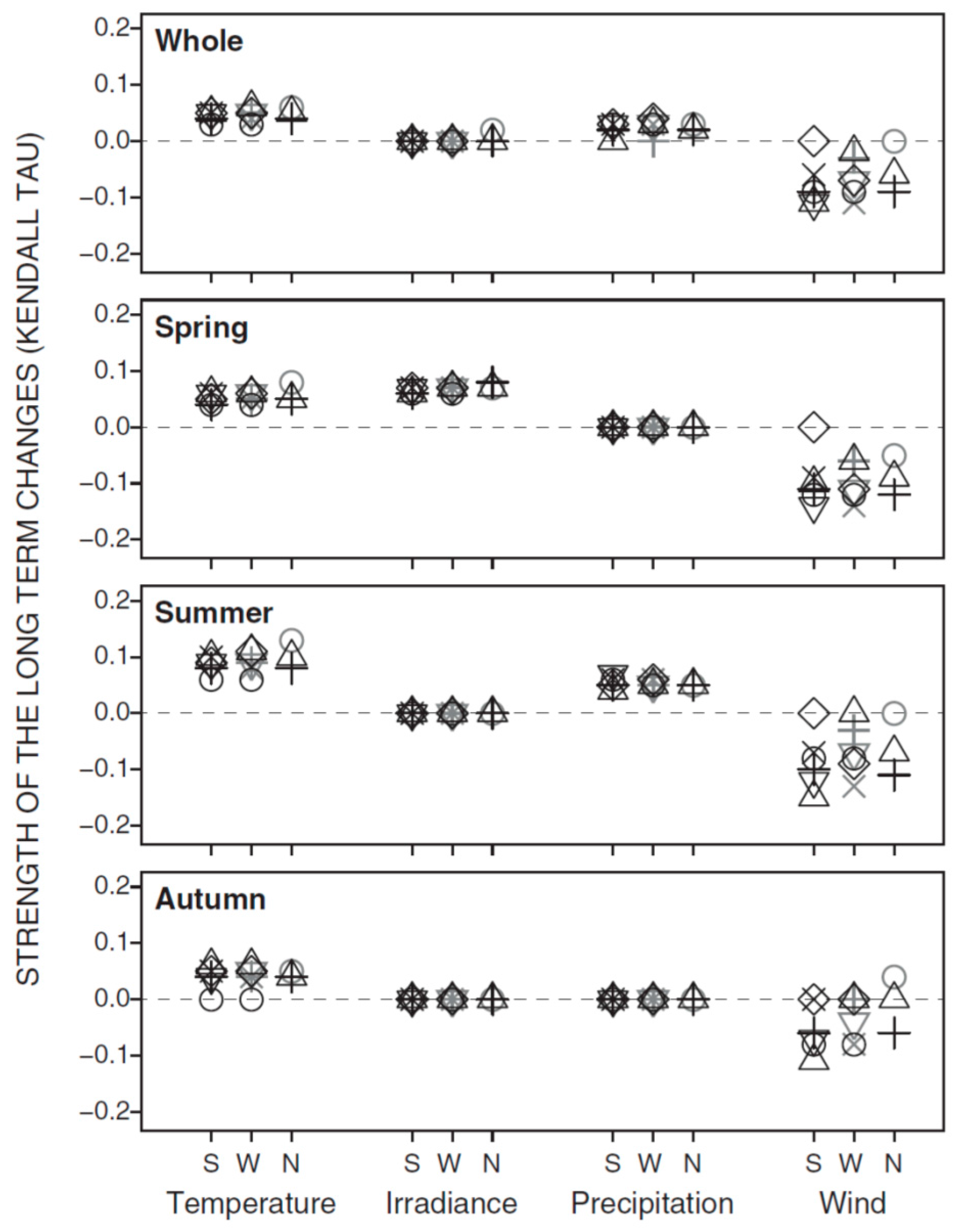 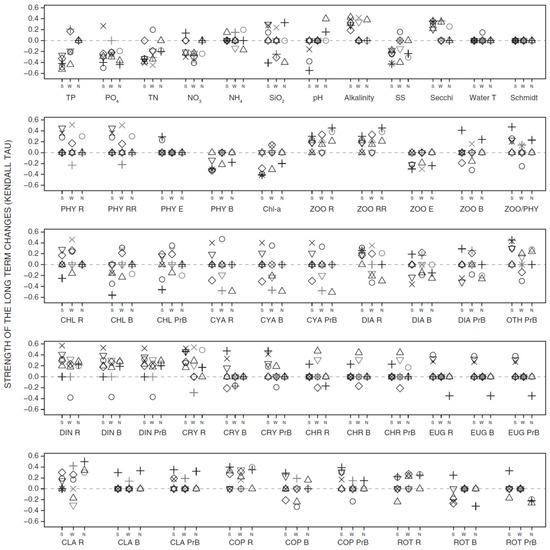 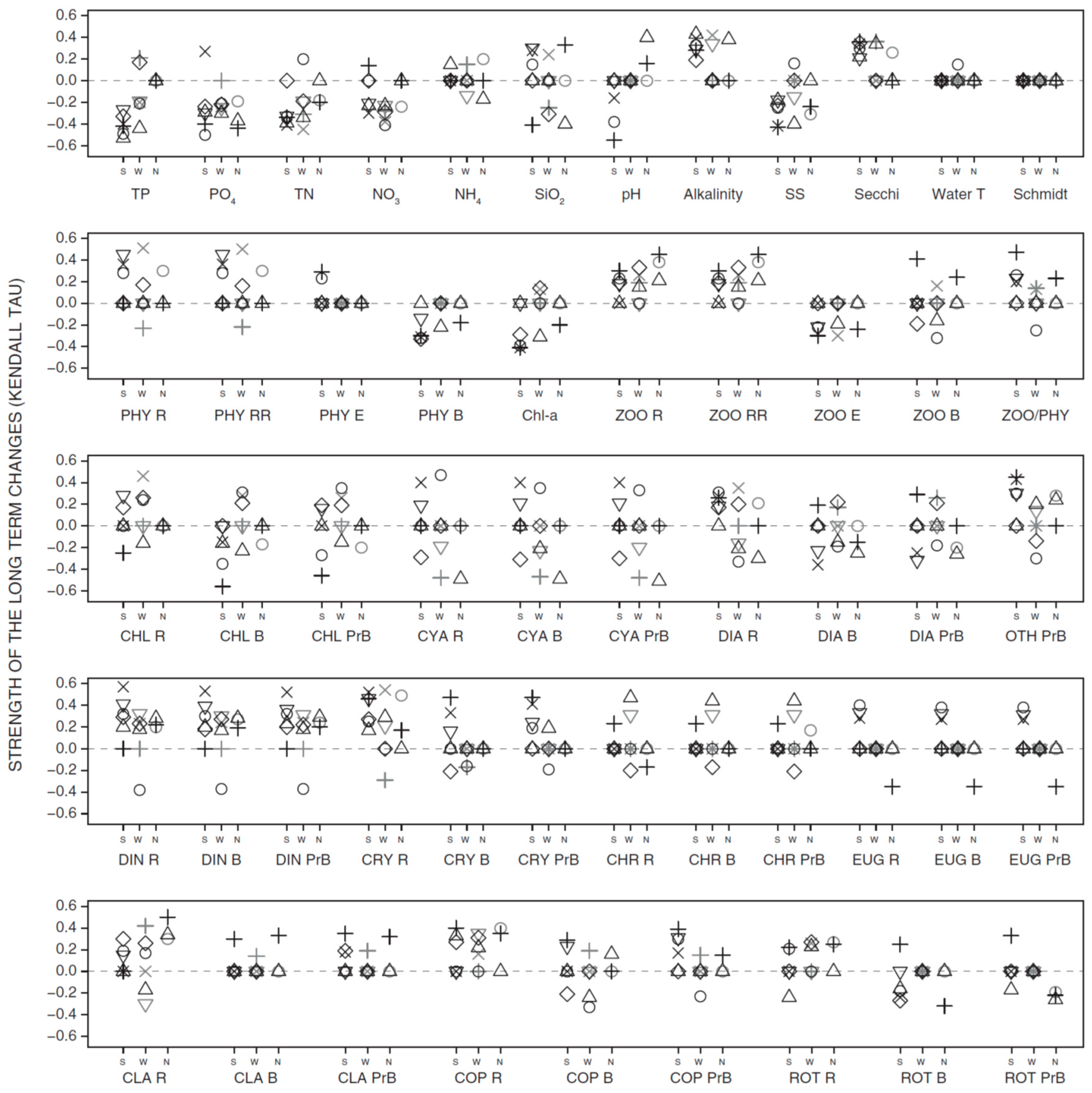 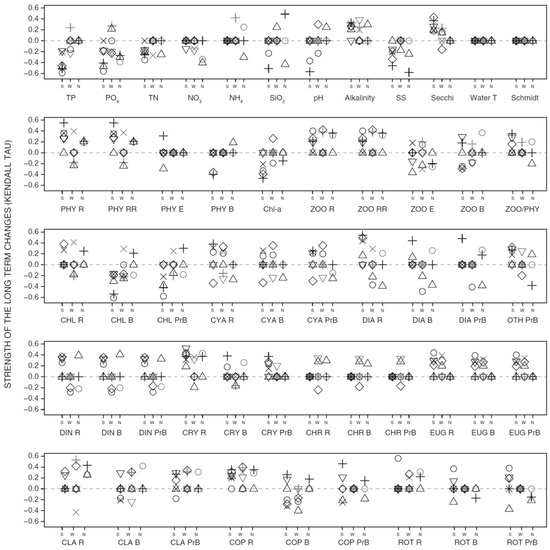 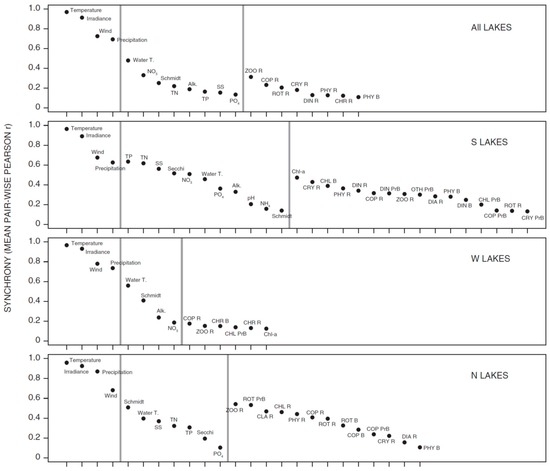 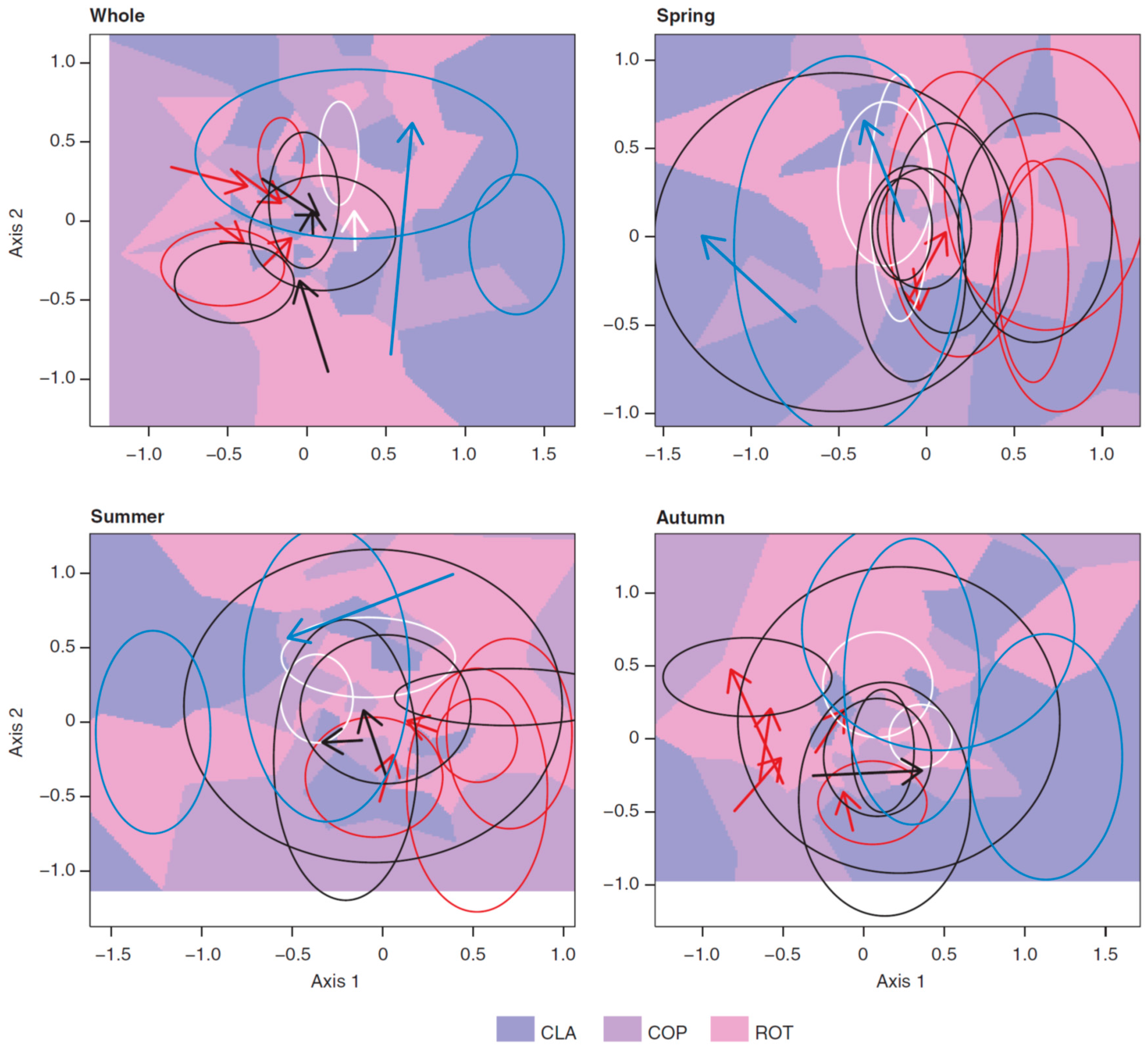 Table 1. Summary of lake morphology and nutrient concentrations in the study lakes.