Quality of Water in the Road Drainage Systems in the Warsaw Agglomeration, Poland
Previous Article in Journal

Long-Term Trends and Temporal Synchrony in Plankton Richness, Diversity and Biomass Driven by Re-Oligotrophication and Climate across 17 Danish Lakes

Residential Water Demand in a Mexican Biosphere Reserve: Evidence of the Effects of Perceived Price

:
The purpose of this paper is to provide empirical evidence for policy-makers of water management, evaluate the applicability of economic variables such as price and other factors that affect demand, and determine the impact thereof on decision-making surrounding water management in the El Vizcaino Biosphere Reserve in Mexico. We estimated a dynamic function with an average price specification, as well as price perception specification. Findings demonstrated that consumers tend to react to perceived average price but not to the marginal price. Furthermore, long-term price elasticity was found to be higher than short-term elasticity, and both elasticities were found to be inelastic. Inelastic elasticities, coupled with rising prices, generate substantial revenues with which to improve water planning and supply quality and to expand service coverage. The results suggest that users’ level of knowledge surrounding price is a key factor to take into account when restructuring rates, especially in situations where consumers do not readily possess the necessary information about their rate structure and usage within a given billing period. Furthermore, the results can help water management policy-makers to achieve goals of economic efficiency, social equity, and environmental sustainability.
Keywords:
lagged consumption; dynamic function; water management; average price; marginal price

The geographical boundaries of the Vizcaino Reserve are: from the west beginning at the 28th parallel extending from the Laguna Guerrero Negro to the estuary El Datil, and on the east extending from the 28th parallel to Santa Rosalia, and from here to the southeast through the transpeninsular highway, through the Laguna San Ignacio and Barra of San Juan (Figure 1).
The Vizcaino Reserve is one of the largest in Latin America with about 2.55 × 106 ha. It is classified as an arid region, with a dry climate and low annual rainfall [22]. Due to weather patterns and geological conditions, water use by the local population involves pumping from subterranean aquifers.

The dynamic panel with fixed effects is the econometric strategy used to estimate the function of water demand, which includes past consumption as a control variable, with , following the approach of Baltagi [29] is fixed and constant for each individual such that . (I.I.D. means that errors are independent and identically distributed.)
The model also assumes that the explanatory variables are uncorrelated with random error, but may be correlated with individual effects. However, the presence of the lagged dependent variable in the model causes problems of endogeneity because of correlation with the error term [29]. As an alternative solution, Kiviet [30] suggested the use of a Least Squares Dummy Variable (LSDV) as an estimator suitable for finite samples. The correction of bias within the transformation estimator is known as the method of Least Squares Dummy Variable Corrected (LSDVC).
In their Monte Carlo simulations, Judson and Owen [31] demonstrated evidence that when the period is 30, the bias of the fixed effects estimator is considerable. These authors recommend using the LSDVC estimator when the lapse is ≤10 and the Anderson and Cheng estimator [32] when the lapse is significant. Other alternatives exist to correct the problem of endogeneity, such as Instrumental Variables estimators (IV) and the Generalized Method of Moments (GMM). However, these are designed for with a fixed T, that is, they demonstrate consistency for a large number of cross-sectional units , even where the length of the time series is short. Meanwhile, the Arellano and Bond [33] estimator has a significant downward bias in small samples. This is because one of the disadvantages inherent in IV estimators such as Anderson–Hsiao (AH) and Generalised Method of Moments (GMM) estimators such as Arellano–Bond (AB) and Blundell-Bond (BB), is that their asymptotic properties depend on having a large N, which is characteristic of micro panel data.
Recently, Bruno [34] developed a method for utilizing the LSDVC estimator for unbalanced panels. In this method, bias is corrected through a consistent estimator such as AH, AB and BB, where the three alternatives used to initialize the bias correction are asymptotically equivalent. In our case T is relatively large, that is instances of and N are either few or N is fixed. Cermeño [35], through an empirical study, demonstrated that LSDV estimator bias is lower compared to the estimates that consider T to be small.

2.4. Description of the Database

The present study considered data from the 2010 to 2014 period to inform the econometric model, including information from seven communities: San Ignacio, Bahia Tortugas, Bahia Asuncion, Villa Alberto Alvarado, Guerrero Negro, Mulege, and Santa Rosalia. The description of each is provided in Table 1.
Table 2 shows the descriptive statistics used in the econometric specifications.

The present study presents relevant, quantitative information that could be considered by policy makers for improving their decision-making surrounding water management policies. The results could provide guidance to individuals and institutions responsible for water management practices, empowering them with information with which to evaluate or redesign water rates for residential use. This could be especially useful in contexts in which consumers have imperfect information and it would be too expensive for water managers to invest the requisite time and resources in consumer education.
Furthermore, the findings of the present study surrounding elasticities in water price increases and in relation to inelastic price could lead to the generation of increased revenue, which in turn could be used to improve supply planning. Results could also be considered alongside of those found in other studies applying contingent valuation methods to understand the implementation of conservation programs for aquifer restoration. As such, long-term policies could be designed to provide services to populations without access to potable water and responsible resource use [45,57,58]. For instance, previous studies have examined the willingness of households that are alternately connected or not connected to the drinking water network to pay for improvements to the system in order to ensure resource sustainability in the future, and have found that connected households are more willing to pay.
The introduction of a discriminatory pricing policy that considers seasonality as a factor (i.e., winter and summer) would likely not be as effective for conservation purposes as alternative pricing policies, given its low coefficient. On the other hand, income elasticity of demand was small for this variable, and fell within the range of income elasticity frequently reported in the literature. Estimates suggest that implementing management strategies including instruments such as price are of fundamental importance. Such strategies should be understood as a basis for the evaluation of the functions for which these policies have been structured, and specifically for the development of rates that would satisfy policy objectives. An adequate design of the pricing system for residential water use can complement other social, legal, and environmental policies designed to improve water management in protected natural areas.

We would like to thank the National Council of Science and Technology of Mexico (CONACYT) for the financial support that this agency provided for this research (Grants numbers 251460, 269540 of Redes Temáticas and 251919 of Ciencia Básica), as well as the Northwest Biological Research Center of Mexico (CIBNOR), the Biosphere Reserve of Vizcaino, the Municipality of Mulege, and for the support provided by MC. Diana Dorantes and David Jefferson in drafting the English version of this manuscript. We thank the time and effort that Sonia Guan and two anonymous reviewers devoted to improve an earlier version of our manuscript. 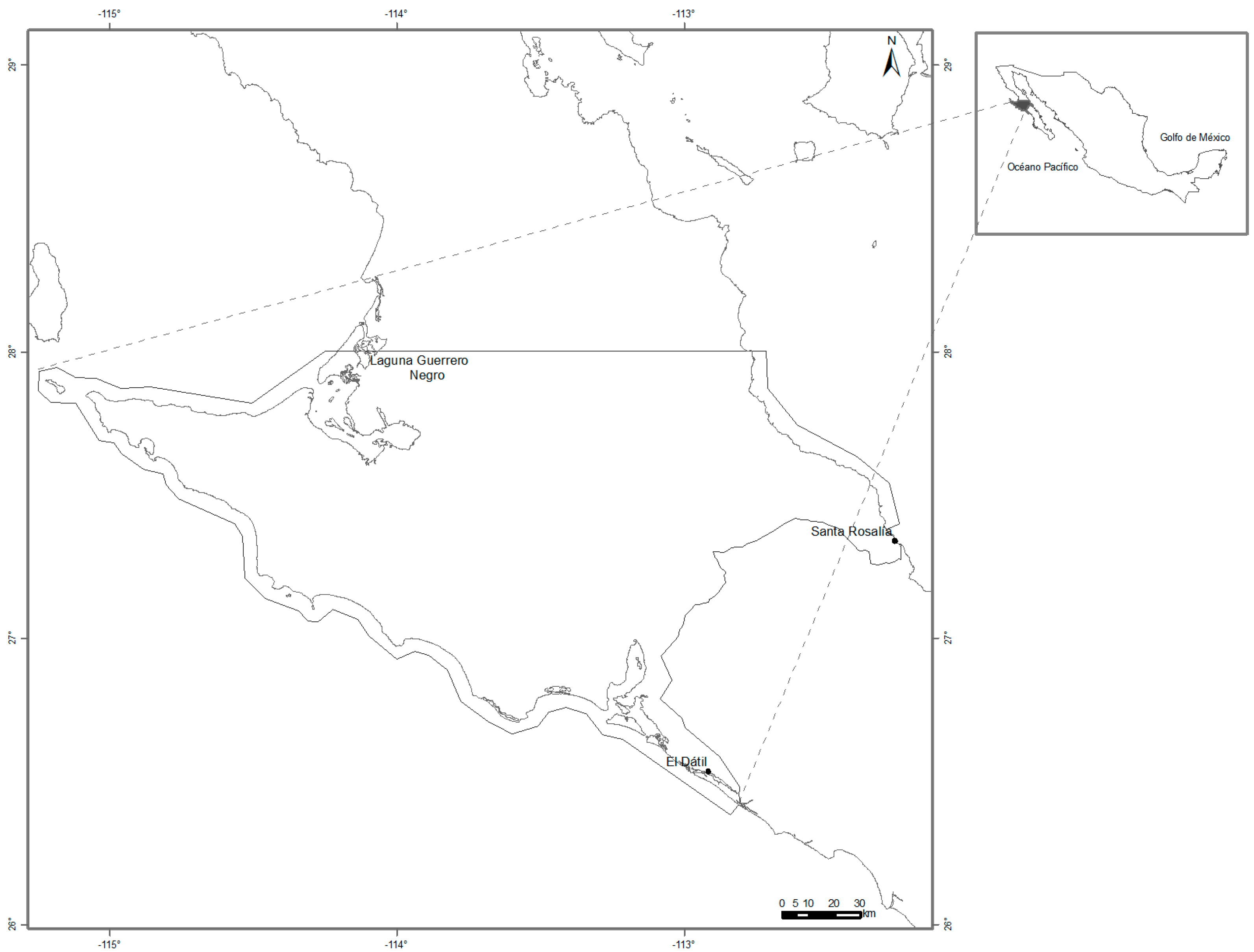