Urban Water Tariffs in Spain: What Needs to Be Done?
Previous Article in Journal

Impact of Population Growth and Climate Change on the Freshwater Resources of Lamu Island, Kenya

Demand for freshwater is rising with factors, such as population growth, land use change and climate variations, rendering water availability in the future uncertain. Groundwater resources are being increasingly exploited to meet this growing demand. The aim of this study is to identify the influence of population growth induced by land use change and climate change on the future state of freshwater resources of Lamu Island in Kenya where a major port facility is under construction. The results of this study show that the “no industrial development” population scenario (assuming the port was not constructed) would be expected to reach ~50,000 people by 2050, while the projected population upon completion is expected to reach 1.25 million in the same year when the Lamu Port-South Sudan-Ethiopia Transport Corridor Program (LAPSSET) port reaches its full cargo-handling capacity. The groundwater abstraction in 2009 was 0.06 m3 daily per capita, while the demand is expected to raise to 0.1 m3 by 2050 according to the “LAPSSET development” projection. The modelling results show that the Shela aquifer in Lamu, which is the main source of water on the island, will not experience stress by 2065 for the “no industrial development” population scenario, whereas for the “LAPSSET development projection” population scenario, it will occur sooner (between 2020 and 2028). The modelling results show that the Representative Concentration Pathways (RCP) climate change scenarios will have a smaller impact on the effective water volume reserves than Special Report on Emissions Scenarios (SRES) for the “no industrial development”, while the impact is expected to be similar for the “LAPSSET development”, suggesting that population growth exacerbated by land use change will be a more significant driving force than climate change in affecting freshwater availability. View Full-Text
Keywords: freshwater; groundwater; population growth; climate change; water stress freshwater; groundwater; population growth; climate change; water stress
►▼ Show Figures 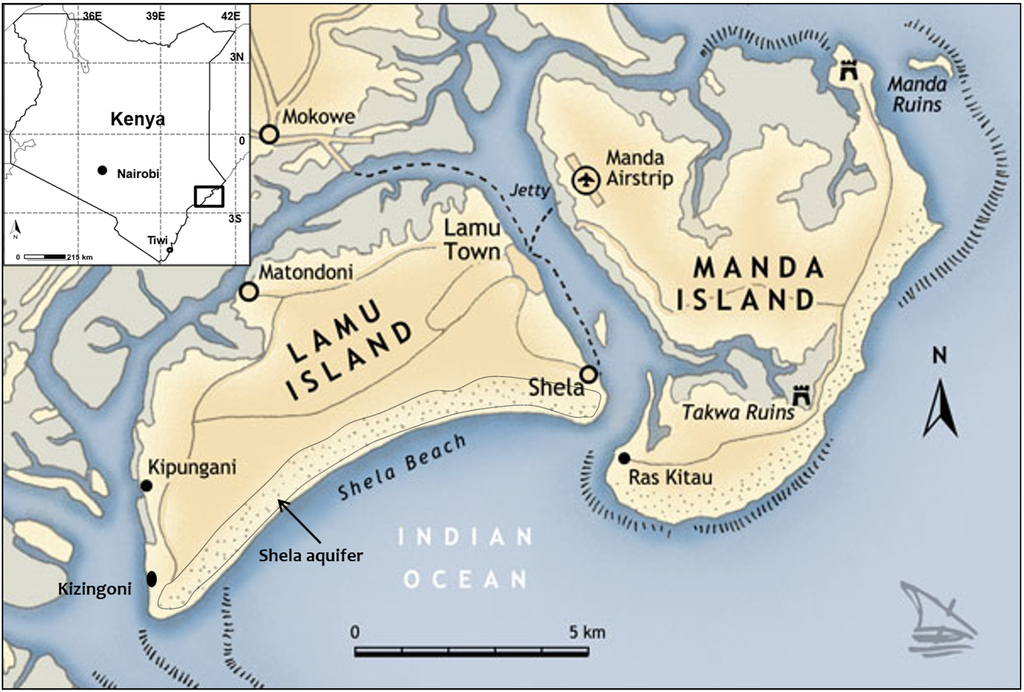