:
In order to investigate the influence of the high-altitude aquatic environment on indigenous fish metabolites, metabolomics studies were applied in this study. Widespread throughout the main stem of the Nujiang River of Schizothorax nukiangensis, we established sampling sites at high (3890 m) and low (2100 m) altitudes and selected six S. nukiangensis at each location, each weighing approximately 150 g and looking healthy. Then, metabolomics analysis was performed to compare the various metabolites of the two groups. Low concentrations of amino acids, dipeptides, eicosapentaenoic acid, docosahexaenoic acid, pentadecanoic acid, Thioetheramide-PC, 1,2-dioleoyl-sn-glycero-3-phosphatidylcholine, 1-Stearoyl-sn-glycerol-3-phosphocholine, 1-Myristoyl-sn-glycero-3-phosphocholine and 1-Palmitoyl-sn-glycero-3-phosphocholine, high concentrations in S-Methyl-5’-thioadenosine, creatine, D-mannose-6-phosphate, D-mannose-1-phosphate, oleic acid and myristoleic acid were found in high-altitude fish liver. These differentially accumulated metabolites were involved in oxidative stress, energy metabolism, carbohydrate metabolism and lipid metabolism. mTOR signaling pathway, apoptosis and lysosome were the KEGG pathways that were enriched between different groups to ensure energy supply and limit tissue damage of fish at high altitudes. All these results contributed to the understanding of the high-altitude adaptation of S. nukiangensis in the Nujiang River. Nicotine and methoprene, two organic pollutants, performed differently in fish at different altitudes. Overall, our findings advanced the fundamental understanding of fish responses to high-altitude environments, adaptive mechanisms and organic contaminants pollution in the Nujiang River.
Keywords:
Qinghai-Tibet Plateau; Schizothorax nukiangensis; altitude; metabonomics; adaptation

The Tibetan plateau (also known as the Qinghai-Tibet Plateau) is characterized by extreme environmental conditions, such as low oxygen concentration, high ultraviolet radiation intensity and daily temperature fluctuations. These conditions pose significant physiological challenges to animals [1,2]. Numerous genome-wide investigations on multiple species have uncovered multiple adaptive pathways that may be responsible for highland adaption in humans [3], snub-nosed monkeys [2], Tibetan mastiffs [4], fish [5] and so on. Nowadays, metabolite analysis is increasingly used to examine the ecological and evolutionary responses of plants to altitude gradients [6,7].
Metabolomics developed quickly in the twenty-first century due to the advancements in LC-MS and other technologies. Fiehn [8] established the link between metabolites and physiological function. By using high-throughput detection and data processing, metabolomics can identify the metabolites in biological samples under specific conditions or treatments. Analyzing all of the metabolites in the samples and then correlating their amounts to the features of the biological sample or treatment are the objectives of the analytical approach used in metabolomics studies [9]. In the fields of life sciences and environmental sciences, metabolomics is crucial for investigating biomarkers [10], disease diagnosis [11] and drug metabolism [12]. For instance, the metabolites changes under various feed or temperatures were used to examine the link between feed, breeding environment and metabolic function changes [13]. The measurement of farmed fish using metabolomics enables the evaluation of fish breeding, nutrition and metabolism, immunity and disease and quality control of aquatic products [14]. In addition, various biomarkers, such as polycyclic aromatic hydrocarbons (PAH) in bile, can assist in understanding the effects of environmental pollution on fish bodies and aquatic ecosystems as a biomonitoring model of water pollution [15,16]. In order to offer a fresh viewpoint on the physiological and biochemical studies of organisms in high-altitude environments, metabolomics was used in this research.
The fish family schizothoracinae has successfully adapted to the harsh environment of the Tibetan Plateau [17]. According to morphological characteristics, such as scales, pharyngeal teeth and barbels, the schizothoracine fishes can be divided into three grades: primitive, specialized and highly specialized grades [18]. Schizothorax nukiangensis, one of the primitive-grade schizothoracine fishes, is endemic to the Nujiang River. According to past research and the result of our scientific expedition, Schizothorax nukiangensis is widespread throughout the main stem of the Nujiang River, with an altitude range from 1000 to 3,800 m [19,20]. Due to its wide altitude range, S. nukiangensis is an ideal candidate for studying fish adaptation to high-altitude aquatic environments. In this work, the differential accumulation of metabolites in the liver of Schizothorax nukiangensis from different altitude habitats was studied. Based on different metabolite profiles and their enriched KEGG pathway analysis, we approach the changes in the metabolic function of fish in different altitude environments. Our research will provide both theoretical and practical insights into the high-altitude adaption of fish in the Qinghai-Tibet Plateau.

Fish were collected from 2 localities along the Nujiang River (Figure 1). Basu (BS) was chosen as the low-altitude site with coordinates of 30.09977° N and 97.23578° E and an elevation of 2100 m. Biru (BR) was chosen as the high-altitude site with coordinates of 31.4878° N and 93.77231° E with an elevation of 3890 m. Under the authorization of the fisheries departments of the Chinese government, we sampled S. nukiangensis in September and October 2020. We selected six S. nukiangensis with around 150 g weight and a healthy, symmetrical appearance at each site. After fish were anesthetized by 100 mg/L Tricaine methanesulfonate (MS-222, Sigma, St. Louis, MO, USA), the liver tissues were immediately placed into enzyme-free 1.5 mL EP tubes and subsequently frozen in liquid nitrogen. All tubes were kept at −80 °C until metabolite extraction.
During fish sampling, field observations provided data on water temperature, flow rate, altitude and dissolved oxygen levels. Water temperature, pH and dissolved oxygen were assessed using YSI with proper probes (YSI ProPlus, YSI Inc., Yellow Springs, OH, USA). Water flow velocity was calibrated three times using the LS300-A portable flow rate measuring instrument (Nanjing Zhuoma Electromechanical Co., Nanjing, China).

The liver tissues were cut on dry ice (~10 mg) into an Eppendorf tube (2 mL). The tissue samples with 200 μL of dd-H2O and five ceramic beads were homogenized using the homogenizer. A total of 800 μL methanol/acetonitrile (1:1, v/v) was added to the homogenized solution for metabolite extraction. The mixture was centrifuged for 15 min (14,000× g, 4 °C). The supernatant was dried in a vacuum centrifuge. For LC-MS analysis, the samples were re-dissolved in 100 μL acetonitrile/water (1:1, v/v) solvent.

The raw MS data (wiff.scan files) were converted to MzXML files using ProteoWizard MSConvert before importing them into freely available XCMS software. For peak picking, the following parameters were used: centWave m/z = 25 ppm, peakwidth = c (10, 60) and prefilter = c (10, 100). For peak grouping, bw = 5, mzwid = 0.025 and minfrac = 0.5 were used. CAMERA (Collection of Algorithms of MEtabolite pRofile Annotation) was used for the annotation of isotopes and adducts. In the extracted ion features, only the variables having more than 50% of the nonzero measurement values in at least one group were kept. The compound identification of metabolites was performed by comparing the accuracy m/z value (<25 ppm) and MS/MS spectra with an in-house database established with available authentic standards.
After being normalized to total peak intensity, the processed data were analyzed by R package (ropls), where it was subjected to multivariate data analysis, including Pareto-scaled principal component analysis (PCA) and orthogonal partial least-squares discriminant analysis (OPLS-DA). The 7-fold cross-validation and response permutation testing were used to evaluate the robustness of the model. The variable importance in the projection (VIP) value of each variable in the OPLS-DA model was calculated to indicate its contribution to the classification. Metabolites with a VIP value > 1 were further applied to Student’s t-test at the univariate level to compare the significance of each metabolite; p-values less than 0.05 were considered statistically significant.

The KEGG database (https://www.kegg.jp/ (accessed on 21 September 2022)) was utilized to assess the KEGG pathway after screening the significantly differential metabolites to discover the enriched biological processes. As shown in Figure 4, the main metabolic pathways were the mTOR signaling pathway, protein digestion and absorption, aminoacyl-tRNA biosynthesis, biosynthesis of amino acids, PPAR signaling pathway and so on. Lysosome and apoptosis were the most enriched pathways for cellular processes.

Funding for this study is provided by Finance Special Fund of Chinese Ministry of Agriculture and Rural Affairs of the People’s Republic of China (Fisheries resources and environment survey in the key water areas of Tibet).

The animal study protocol was approved by the Ethics Committee of Huazhong Agricultural University (protocol code is HZAUFI-2019-034 and the date is 25 February 2019). All efforts were made to minimize the suffering of sampled fish.

We thank Shaoping Liu, Huiwu Tian, Lei Gao and Ke Liu for suggestions to improve the paper. We thank the following for assistance in the field: Jie Zhang, Yizhu Chen, Junying Zhang and Rongjun Ma. 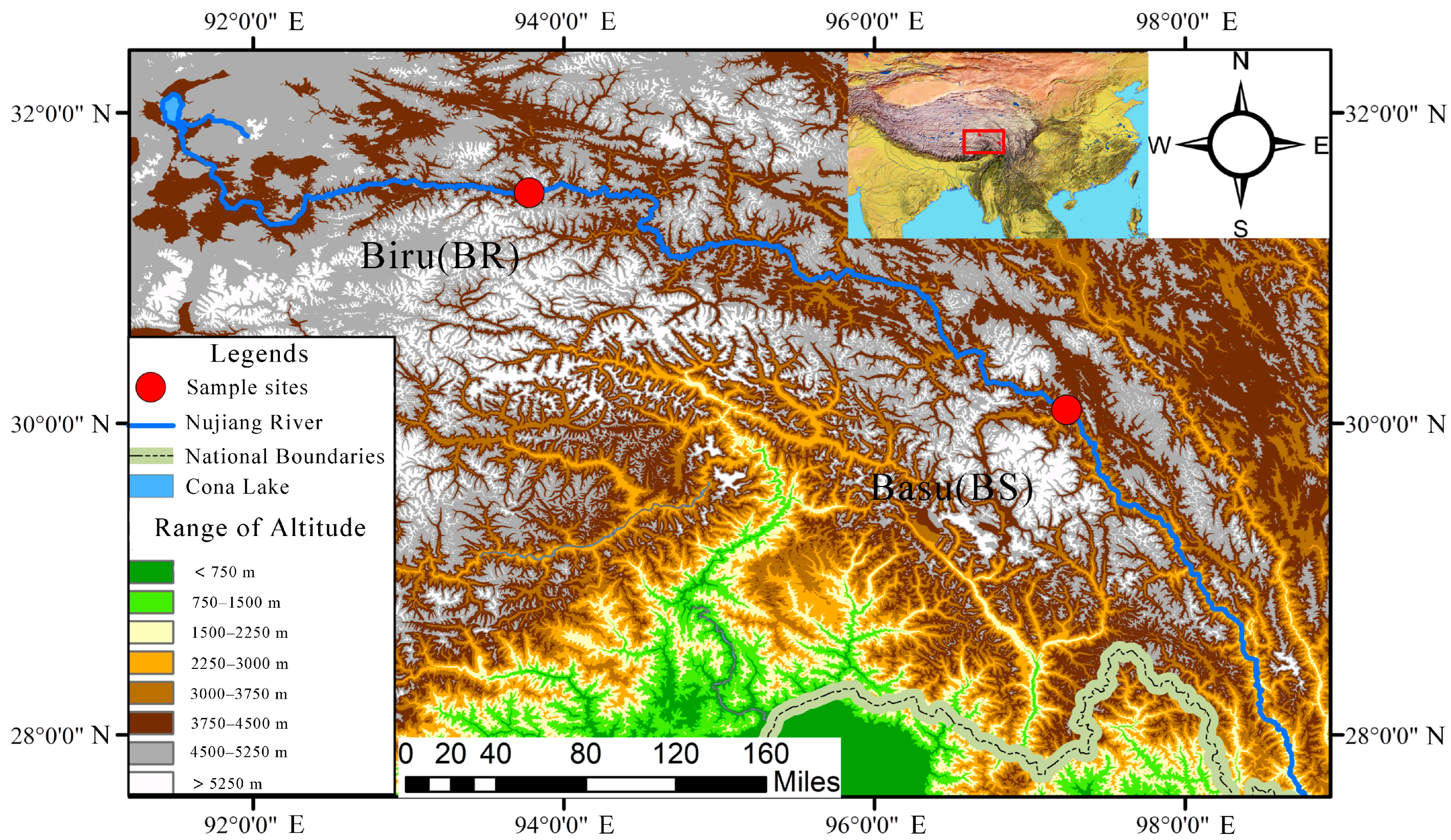 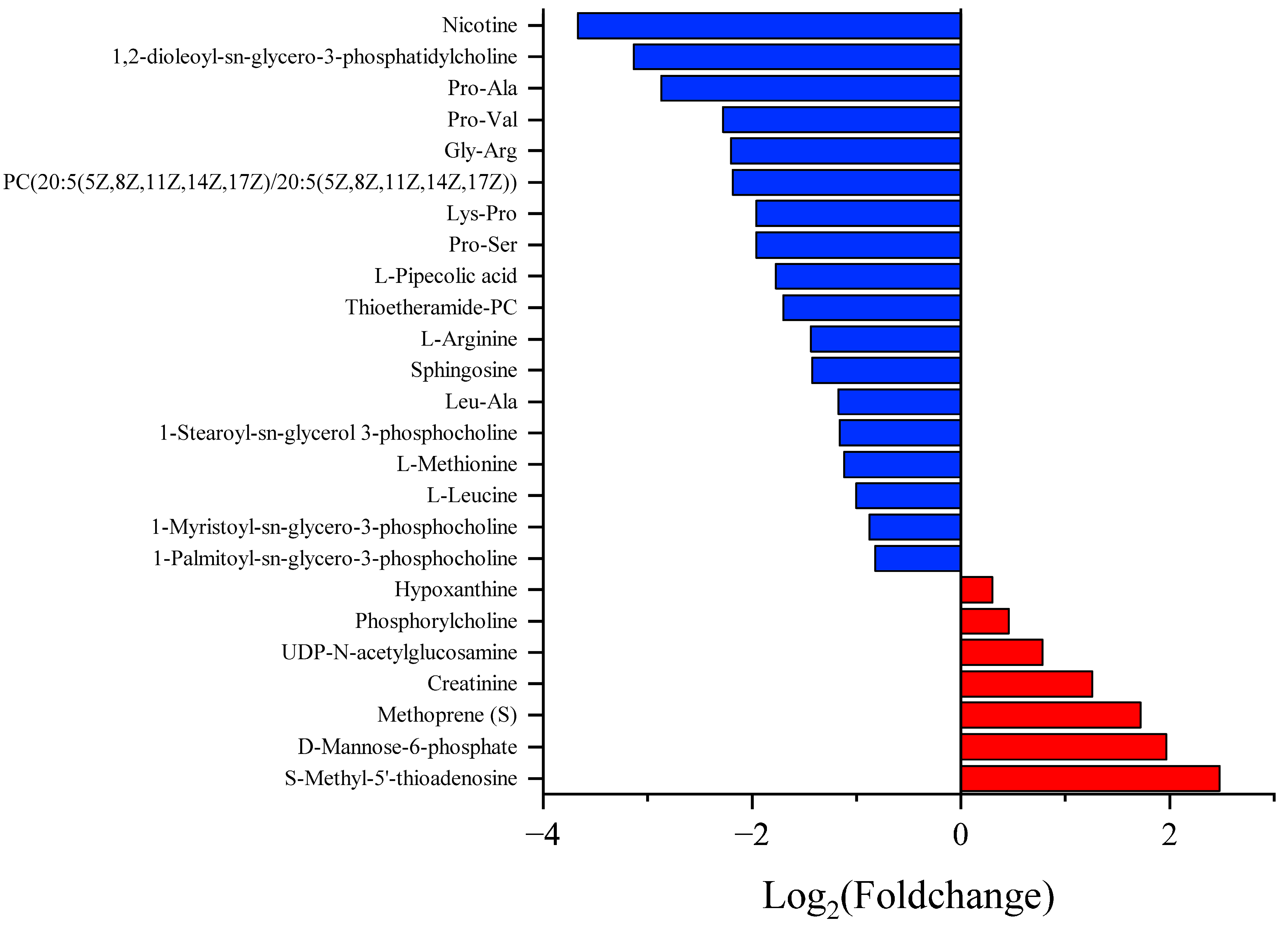 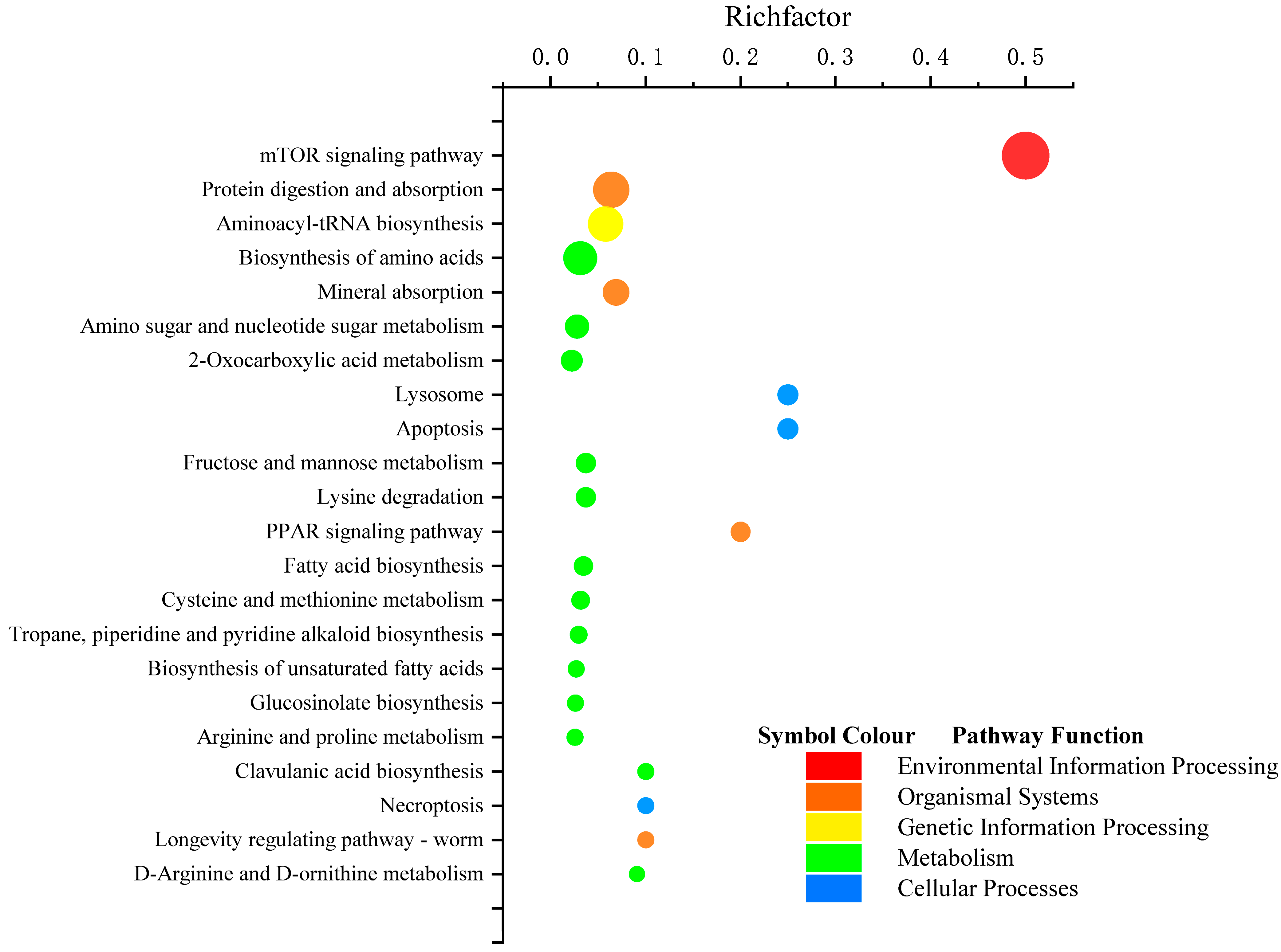