2.1. Generation of Flood Samples and Establishment of Operation Models

2.1.2. Establishment of the Operation Models

where, is the maximum outflow of the ith reservoir.

where, and are the minimum and maximum limits of reservoir water level at time t, respectively.

where, is the permissible maximum release fluctuation between time t and .
The MRFCJO model carries out a joint operation to all reservoirs. The objective function is shown in Formula (8), and the constraints are the same as Formulas (3)–(7). where, M is the number of reservoirs in the flood control system.

2.2.1. Framework Design of the MRFCHOCPS

CPS is an intelligent system that realizes real-time perception, dynamic coordination control, and information services of large-scale distributed heterogeneous systems through 3C technology, namely, communication, computation, and control [25]. In the CPS, sensors collect information about physical systems and transmit this information in real-time to computers and embedded systems for intelligent control. These network components use computational intelligence to process information and determine appropriate control settings for the physical components of the system.
MRFCHOCPS is specifically designed for real-time flood control operation of large-scale multi-reservoir systems, including five parts: real-time monitoring, control center, database, computation module, and communication network. In the computation module, the reservoir operation is realized by the MRFCHO model. The framework of the MRFCHOCPS is shown in Figure 2.
MRFCHOCPS adopts 3C technology to realize real-time monitoring, dynamic operation, and decision-making of the flood control of the multi-reservoir systems. Communication refers to the transmission of information among monitoring equipment, control center, database, and computation module. Computation refers to realizing the hydrological forecast, effective reservoir identification, real-time operation of the multi-reservoir system and flood evolution through computational models. Control refers to realizing information interaction and closely coordinated control of the monitoring equipment, database, and computing module through self-adaptive control technology.

2.2.2. Functions of Each Component of MRFCHOCPS

In MRFCHOCPS, the information can be interacted and coordinated to ensure real-time perception, reliable communication, high-speed calculation, and precise control of the system. The MRFCHOCPS has characteristics of perceptibility, heterogeneity, integration, autonomy, real-time capability, and reliability. The functions of components of MRFCHOCPS are as follows.

The monitoring equipment monitors changes in the physical environment in real-time and transmits the information to the database for storage through the communication network, and then the information can be called by the calculation module. In this system, the physical environment is composed of many elements such as weather conditions, underlying surface environment, etc. The monitoring information is the input of the computation module and affects the calculation accuracy. Therefore, monitoring equipment is the basis to ensure the reliable operation of MRFCHOCPS.

The database is used for the storage and management of data in MRFCHOCPS and provides support for the real-time intelligent operation system. The database contains three kinds of data: (a) inherent data, such as historical hydrological data, river basin geospatial data, and hydrologic engineering parameters; (b) monitoring data, such as real-time rain, flood, and reservoir water level; and (c) computed results, such as hydrological forecast results, criteria calculation results, effective reservoir identification results, reservoir operation schemes, and flood routing results. Various types of data in the database are organized and structured for information exchange and sharing among each part of the system.

2.3. Evaluation of the MRFCHO Model

2.3.1. Evaluation of the Model Accuracy

2.3.2. Evaluation of the Model Solving Efficiency

At present, the solution methods of the multi-reservoir optimal operation model include DP and its improved algorithms such as POA, DPSA, etc., as well as intelligent algorithms, such as GA, PSO, etc. Feng et al. [31] studied the time and space complexity of commonly used algorithms for optimal operation multi-reservoirs, and the results show that the space and time complexity of the algorithms will increase exponentially or manyfold with the increase of the number of reservoirs. This paper takes POA and GA as examples to evaluate the dimensionality reduction effect of the MRFCHO model.
Suppose there are M reservoirs for joint operation, T periods, and a total of I iterations. The initial time and the end time have one state variable. The state is fixed at time and time , and at time t, it is discretized into k states for optimization. The number of storage units of POA is and the number of regulating calculations is . The corresponding space complexity is and time complexity is .
Suppose there are M reservoirs for joint operation, T periods. The initial population size of GA is N, the selection probability is , the crossover probability is , and the mutation probability is . The maximum generation I is used as the termination condition. Each individual is regarded as an operation scheme, so the storage space of N individuals is . The number of individuals in one evolution is and the number of calculations is . The storage space of the I round of evolution remains unchanged, and there the total number of calculations is . , so that the maximum amount of calculation is . The corresponding space complexity is and time complexity is .

The basin-wide flood which has a large-scale influence has been selected as a typical flood sample. The frequency of this kind of flood is very low. In the Huaihe River basin, since the 14 reservoirs have been put into operation, the basin-wide flood has occurred in 1983, 1991, 1996, 2003, 2005, and 2007. Considering factors such as spatial distribution of storm, flood magnitude, etc., 13 typical floods are selected, which could represent all possible scenarios of floods in the Huaihe River Basin. Each typical flood contains the inflows of 14 reservoirs and the lateral inflows upstream of the 11 flood control points. The duration of the flow data time series is 360 h. The lateral inflows are calculated by subtracting the outflows of the upstream reservoirs from the flow of the flood control point. Table 1 shows the characteristics of typical floods. Then, 1000 random flood samples are generated on the basis of the historical typical floods, denoted as , , , . The study of Li et al. [23] shows that the RFC model has high accuracy and stability in the identification of effective reservoirs. Therefore, the RFC model is established for the identification of effective reservoirs of these random flood samples.

4.1. Accuracy of the MRFCHO Model

4.2. Solving Efficiency of the MRFCHO Model

In the real-time flood control operation of a large multi-reservoir system, not all reservoirs are effective for flood control, and the traditional flood control method is difficult to realize the adaptive combination of effective reservoirs. In this paper, the MRFCHOCPS framework is proposed, which adaptively combines effective reservoirs according to the spatiotemporal variation of flood control situations, establishes a dynamic model and realizes intelligent operation. First, a random flood sample set considering the randomness of both space and magnitude is generated and a MRFCHO model is established. Then, the CPS theory is introduced to put forward the MRFCHOCPS framework. Finally, the accuracy and solving efficiency of the MRFCHO model, as well as the adaptability of the MRFCHOCPS, are evaluated. A case study of the flood control system in upstream of Lutaizi point in the Huaihe River Basin shows that:

(1)
Among 1000 random flood samples, the equivalent qualified rate of the MRFCHO model is 84.9%. It shows that in the future real-time flood control operation, it is highly reliable to establish the MRFCHO model for flood control operation on the basis of identifying effective reservoirs.
(2)
The operation results of floods with different magnitudes show that the equivalent qualified rate decreases with the decrease of flood magnitude. When the peak discharge of the Lutaizi point is more than 7000 m3/s, the equivalent qualified rate is more than 90%. The MRFCHO model is more suitable for basin-wide floods.
(3)
In random flood samples, the number of effective reservoirs is generally 4–7, and the maximum number is not more than 11. Compared with the MRFCJO model, the space and time complexity of the MRFCHO model is reduced drastically.
(4)
The solving efficiency of the MRFCHO model is significantly improved compared with that of the MRFCJO model under the premise of ensuring the flood control effect. The MRFCHO model provides a reliable method for the real-time operation of basin-wide floods.
(5)
MRFCHOCPS has better adaptability in the real-time operation of large-scale multi-reservoir systems because it can realize the intelligent identification of effective reservoirs and dynamical modeling according to the rain and flood information.

Although this paper verifies the accuracy and efficiency of the MRFCHO model and the adaptability of MRFCHOCPS, there are many uncertainties such as flood forecast errors in real-time operation. The performance of the MRFCHO model under uncertain conditions needs further exploration.

Methodology, J.L. and P.-a.Z.; software, J.L. and Y.W.; formal analysis, Y.L. and J.Z.; writing—original draft preparation, J.L.; writing—review and editing, M.Y. and W.L.; funding acquisition, J.L., P.-a.Z. and Y.W. All authors have read and agreed to the published version of the manuscript.

Data available on request due to restrictions, e.g., privacy or ethical. 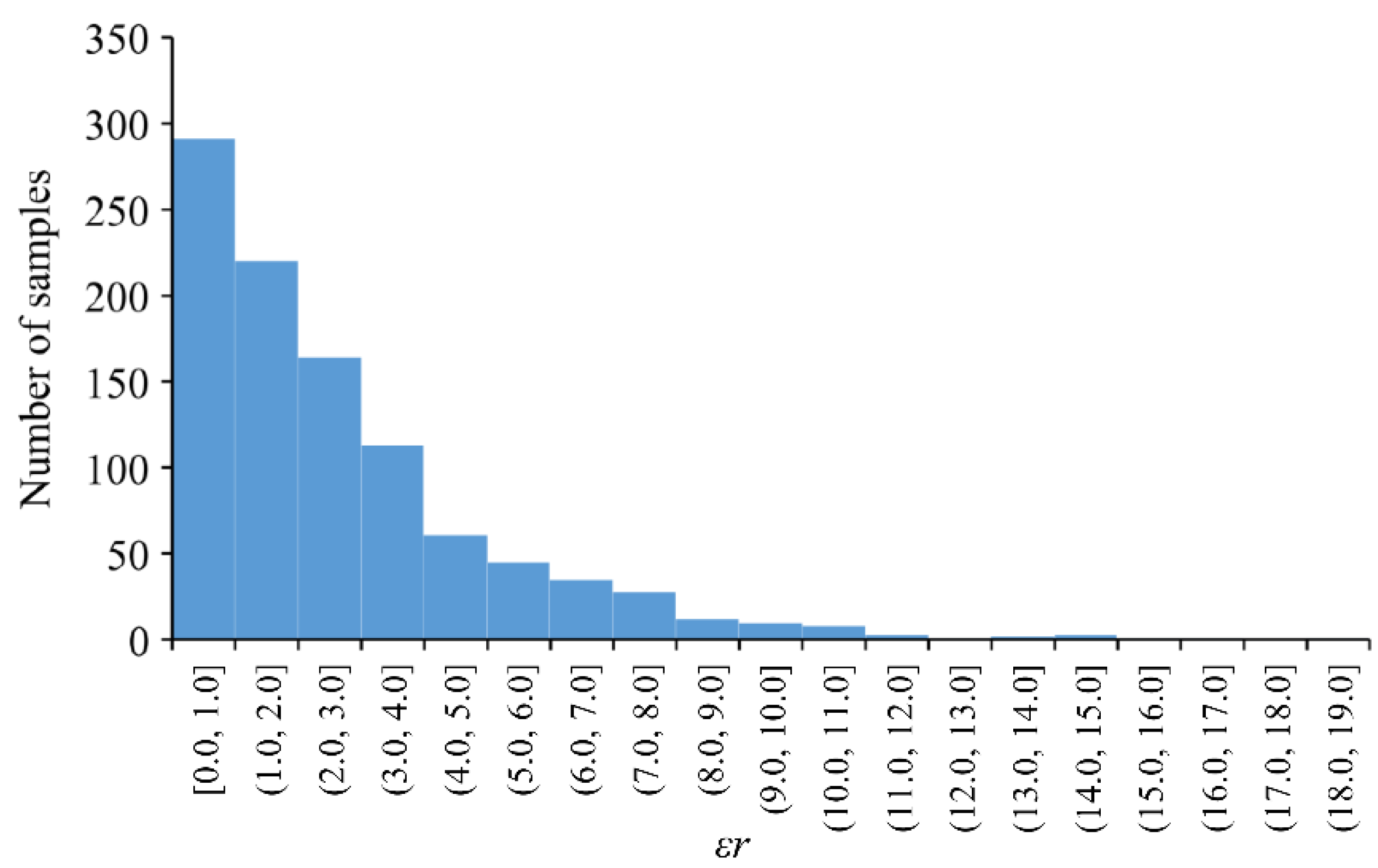 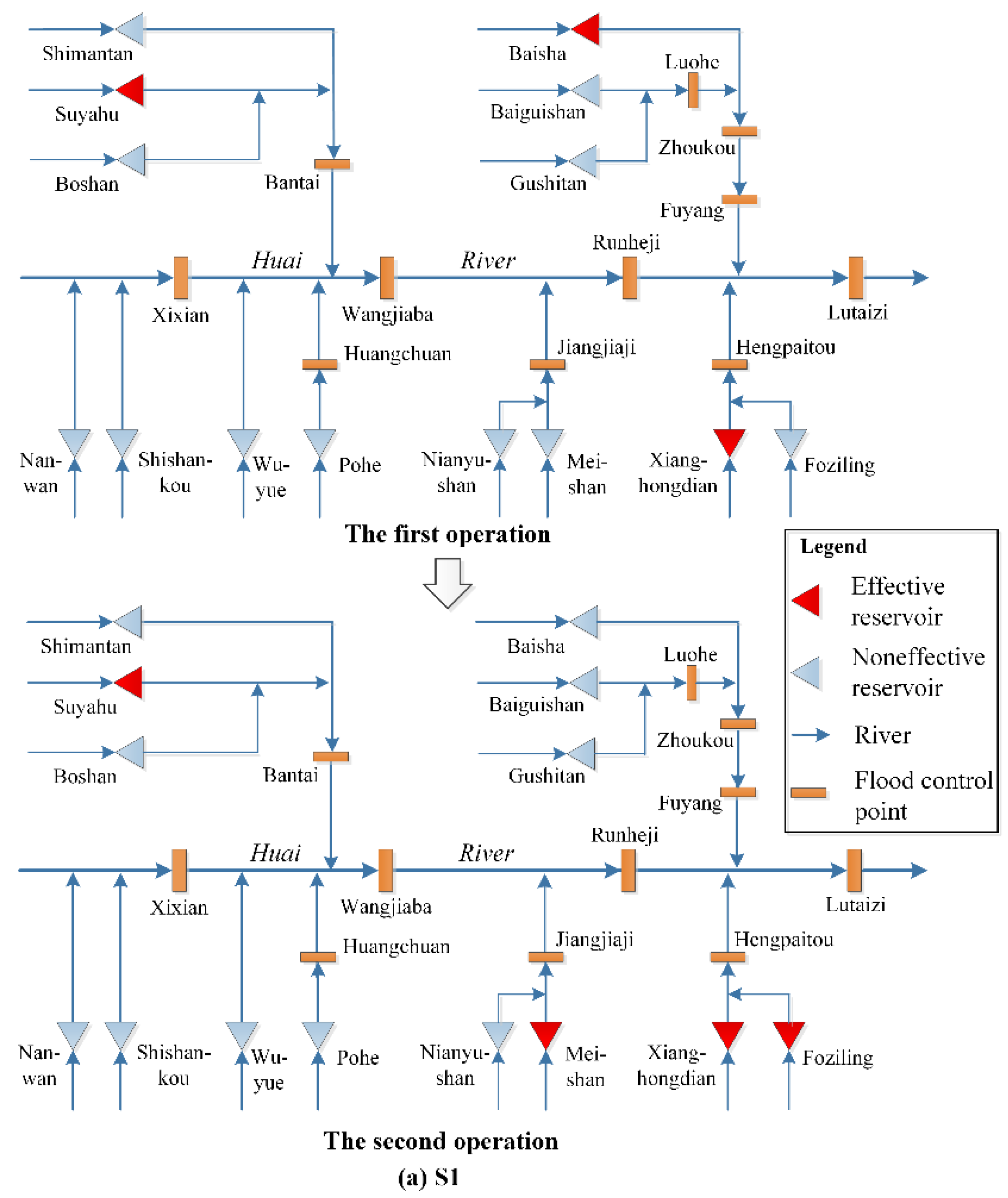