The Impact of Floating Raft Aquaculture on the Hydrodynamic Environment of an Open Sea Area in Liaoning Province, China

We removed any technical sequences or their fragments (including adapters, polymerase chain reaction (PCR) primers), and any low quality sequences (with a base quality < 20). We achieved this by filtering the data (in the fastq format) using Trimmomatic (v0.30) to provide only high–quality, clean data in our analysis. Firstly, the whole genome sequence of E. carinicauda assembled by our research group was taken as the reference genome (the data have not been published yet). Next, Hisat2 (v2.0.1) was indexed to the reference genome sequence. Finally, we mapped the clean reads to the Silva database to remove the rRNA. All subsequent date analyses were based on clean data without rRNA.

The DESeq2 and edgeR [26] methods were used to perform the differential expression analysis. The influence of gene length and sequencing volume on the calculated gene expression level was eliminated by the fragments per kilobase per million reads (FPKM) method. The calculated gene expression level can be directly used to compare the expression variations between different genes. We used FPKM to normalize the data. The Benjamini and Hochberg’s approach controlled the false discovery rate. |log2FC| ≥ 1 and p-values < 0.05 were set to detect any significant DEGs. Gene Ontology (GO) and Kyoto Encyclopedia of Genes and Genome (KEGG) enrichment analyses of differentially expressed gene sets were implemented by the topG and KOBAS packages 3.0 [27], respectively.

Ten DEGs were randomly selected for quantitative reverse transcription–PCR (qRT–PCR) analysis to validate the differential expression of mRNAs. The qRT–PCR assay was performed using SYBR Green PCR Master Mix (Life Technologies, MASS, Waltham, MA, USA) in the 7500 fast Real–Time PCR system (Applied Biosystems, Foster, CA, USA) according to the manufacturer’s agreement. The 18S rRNA of E. carinicauda was used as the internal reference [28]. All primer sequences and 18S rRNA sequences are listed in Table S1. The relative expression of target genes was calculated with 2−∆∆CT methods. One–way ANOVA method and Duncan’s test in the statistical software SPSS 22.0 (SPSS, Chicago, IL, USA) were used for statistical analysis. The results are presented as the mean ± standard error, and differences in gene expression were considered statistically significant at p < 0.05.

Normal reproduction characteristics were observed in the histological sections of the ovary. The E. carinicauda ovary was in Phase I. The oogonia were oval and proliferative, and the nuclei were round. Most cells had one nucleolus, while a few had two nucleoli. The nucleolus stained the deepest color. The cells of the oogonia were closely arranged. A single layer of follicle cells was closely arranged around the oogonia (Figure 1a). After 60 days of high carbonate alkalinity stress, most of the cells in the ovarian cavity were previtellogenic follicles, and the nuclei were large and original, accounting for about half of the cell volume (Figure 1b).

3.2. Summary of the RNA–Sequencing Data

A total of 1102 significant DEGs were identified between the HC_O and CG_O groups. Compared to the control group, 758 up−regulated genes and 344 down−regulated genes were expressed in the ovarian tissue of the HC group (Figure 2a). Compared with the CG_E group, 468 DEG (139 up−regulated and 329 down−regulated) were identified in the HC_E group (Figure 2b). These results suggest that carbonate alkalinity has a significant effect on transcription in the ovary and eyestalk.

3.7. The Validation of DEGs by qRT−PCR

In order to further validate the reliability of the DEGs identified by RNA−Seq, we randomly selected 10 DEGs from two comparisons: HC_O vs. CG_O and HC_E vs. CG_E. The qRT−PCR results were consistent with those of RNA−seq, indicating that the RNA−Seq data was accurate (Figure 7).

X.Z., J.W. and J.L. (Jitao Li) conceived and designed the research; X.Z., J.W., C.W., W.L., Q.G. and Z.Q. performed the experiments and analyzed the data; J.L. (Jian Li) provided research ideas for the experiments. All authors have read and agreed to the published version of the manuscript.

No human subjects were included in this study. The animal study was reviewed and approved by the Animal Ethics Committee of Yellow Sea Research Institute, CAFS (ID Number: YSFRI–2022033). 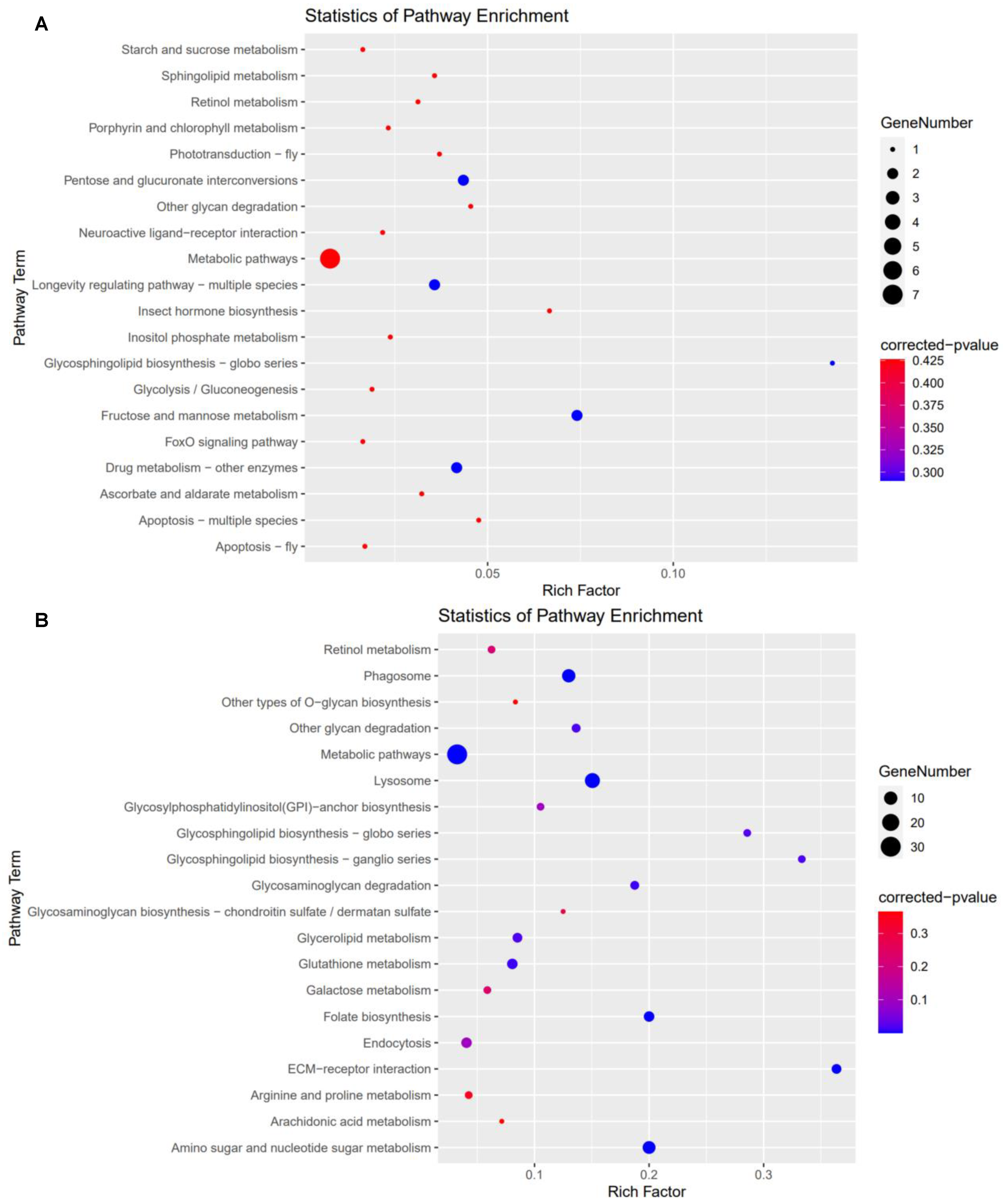 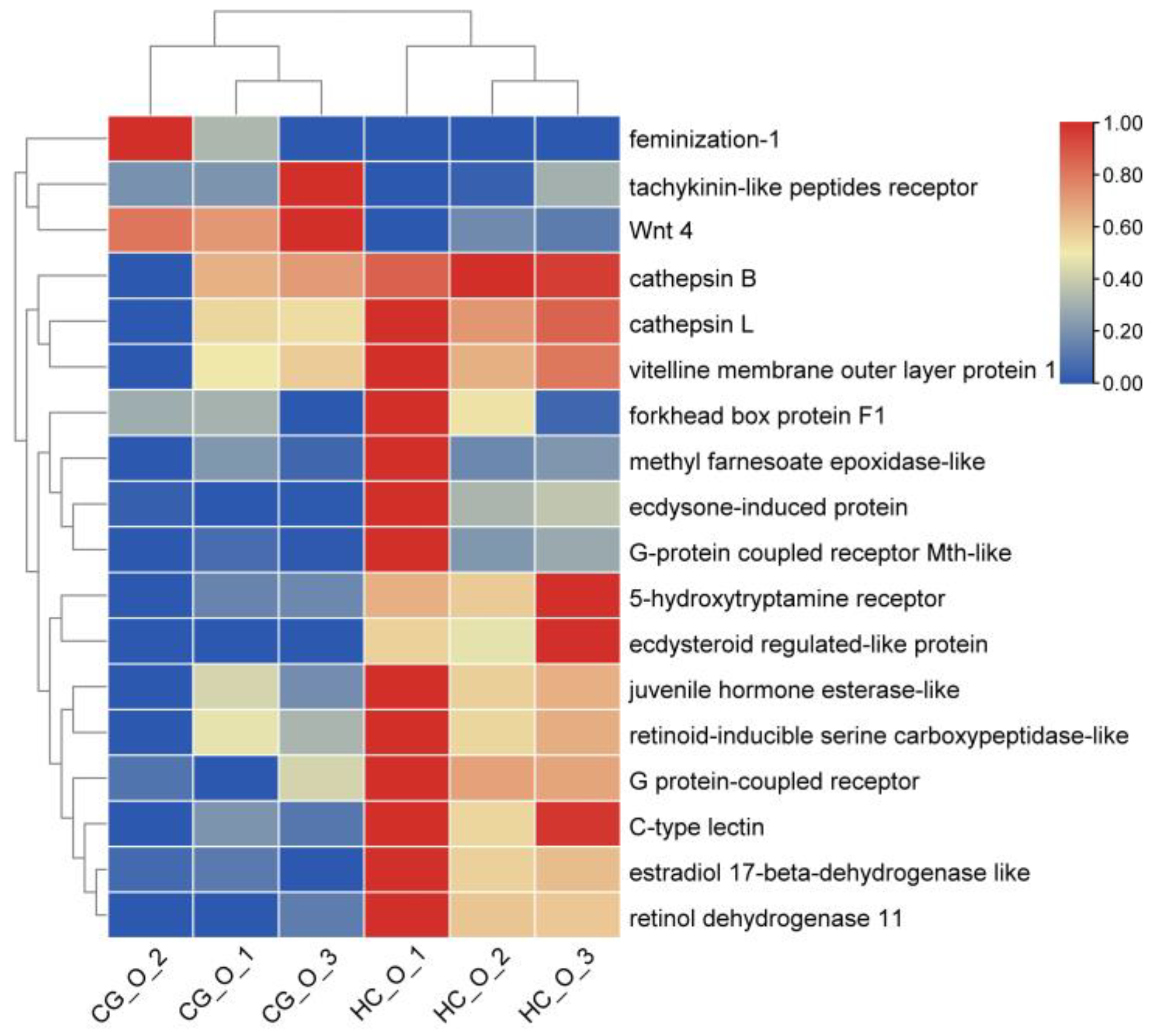 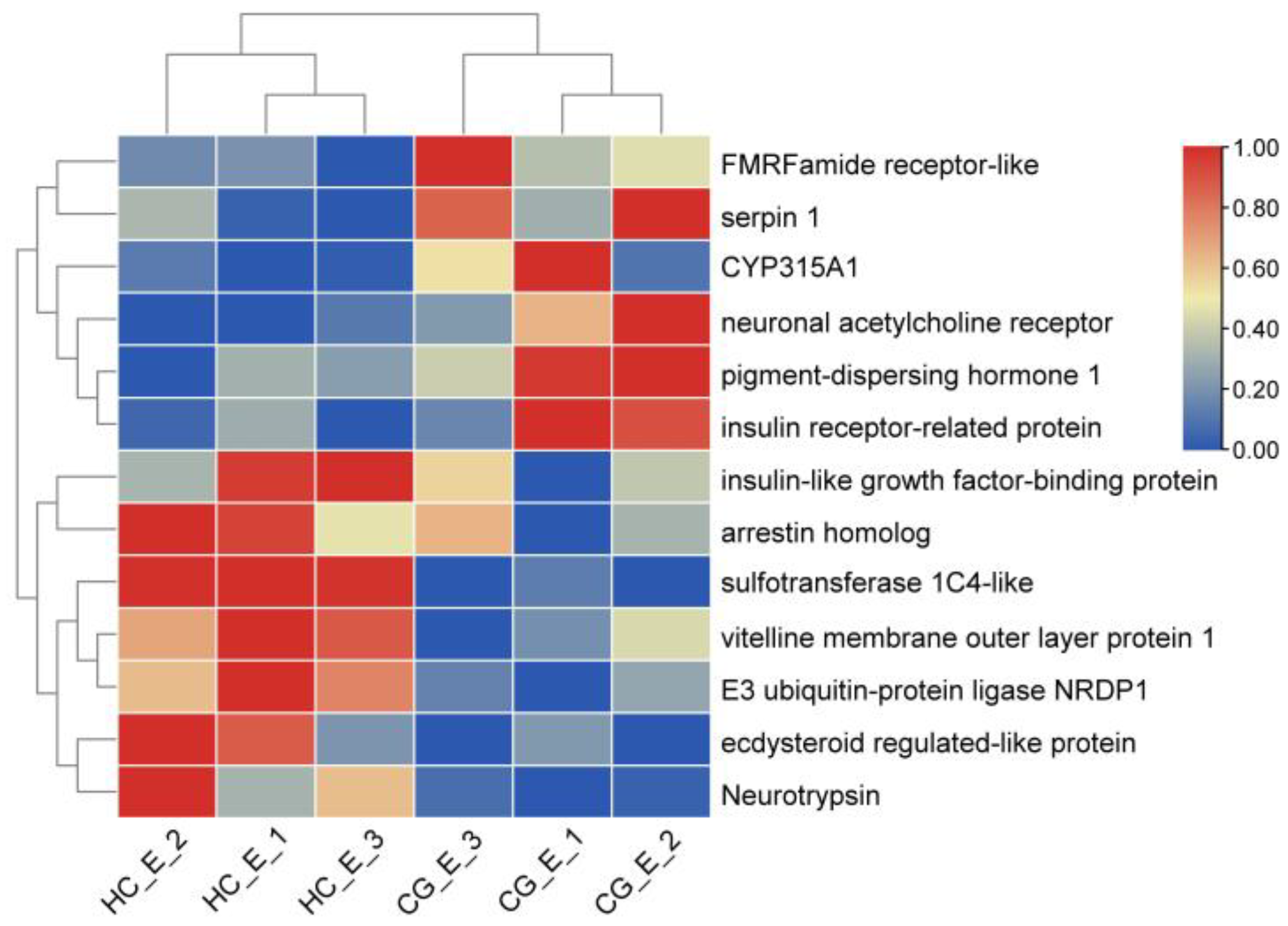