Soil water content (SWC) is one of the most important hydrologic variables; it plays a decisive role in the control of various land surface processes. We simulated SWC using a Soil and Water Assessment Tool (SWAT) model in southern Saskatchewan. SWC was calibrated using measured data and Soil Moisture Active Passive (SMAP) Level-4 for the surface (0–5 cm) SWC for hydrological response units (HRU) at daily and monthly (warm season) intervals for the years 2015 to 2020. We used the SUFI-2 technique in SWAT-CUP, and observed daily instrumented streamflow records, for calibration (1995 to 2004) and validation (2005–2010). The results reveal that the SWAT model performs well with a monthly PBIAS < 10% and Nash–Sutcliffe efficiency (NS) and R2 ≥ 0.8 for calibration and validation. The correlation coefficient between ground measurement with SMAP and SWAT products are 0.698 and 0.633, respectively. Moreover, SMAP data of surface SWC coincides well with measurements in terms of both amount and trend compared with the SWAT product. The highest r value occurred in July when the mean r value in SWAT and SMAP were 0.87 to 0.84, and then in June for r value of 0.75. In contrast, the lowest values were in April and May (0.07 and 0.04, respectively) at the beginning of the growing season in southern Saskatchewan. Furthermore, calibration in the SWAT model is based on a batch form whereby parameters are adjusted to corresponding input by modifying simulations with observations. SWAT underestimates the abrupt increase in streamflow during the snowmelt months (April and May). This study achieved the objective of developing a SWAT model that simulates SWC in a prairie watershed, and, therefore, can be used in a subsequent phase of research to estimate future soil moisture conditions under projected climate changes. View Full-Text
Keywords: SMAP; soil water content; SUFI-2; SWAT; southern Saskatchewan SMAP; soil water content; SUFI-2; SWAT; southern Saskatchewan
►▼ Show Figures 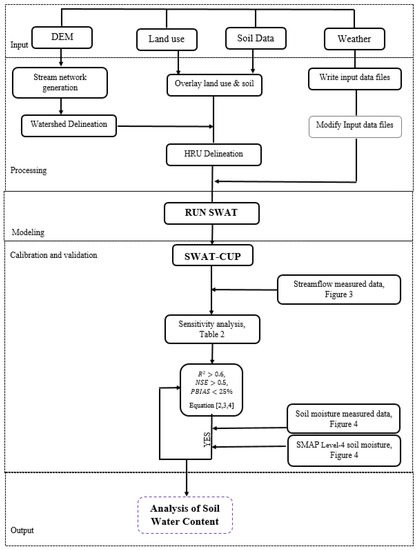