In this study, the agricultural grey water footprint (AWFgrey) only refers to the grey water footprint of the planting industry [27,28].
Regarding crop growth, a large number of chemical fertilizers and pesticides are applied in order to reduce plant diseases and insect pests of crops and soil fertility. Most of these enter the water environment at a fixed proportion (leaching rate) under the action of the precipitation or irrigation water, causing surface runoff and underground water pollution [29]. According to the common model of the Water Footprint Assessment Manual, the grey water footprint from the planting industry can be calculated based on the leaching of nitrogen into water caused by fertilizer application (including nitrogen fertilizers and compound fertilizers) [7,30,31]. In this study, we only considered the grey water footprint of nitrogen produced by nitrogen fertilizers and compound fertilizers in the calculation [32,33,34]. The specific calculation formula is as follows [35]:
In Equation (1), (m3) is the grey water footprint of the planting industry and α (%) represents the leaching rate; 7% of nitrogen was selected as the leaching rate in this study according to previous studies [32,36]. APPl is defined the abbreviation of the word “Application”. (kg) and (kg) represent the annual yield of nitrogen fertilizer and compound fertilizer, respectively [35]. and represent a nitrogen content of 46% and 30% in nitrogen fertilizer and compound fertilizer, respectively [35]. (kg/m3) represents the water quality standard concentration of the pollutant N element in chemical fertilizers required by Grade III of the Environmental Quality Standards for Surface Water in China (GB3838-2002), set at 0.001 kg/m3 [14]. (kg/m3) represents the natural background concentration of the pollutants N element in chemical fertilizers in the receiving water, which is usually defaulted to 0 kg/ m3 [37,38].

As the Moran scatter diagram cannot accurately quantify the degree of cohesion and transition of spatial correlation, the measurement method for the space–time transition proposed by Rey et al. was adopted to further explore the spatiotemporal transfer characteristics of the local spatial correlation types of the in the Yellow River Basin [54]. The specific types and descriptions of the spatiotemporal transitions are shown in Table 1.
The calculation method of spatial cohesion of the in prefecture-level cities is as follows [49]:
In Equation (6), is the degree of spatial cohesion; represents the number of prefecture-level cities of transition type Ⅳ in the study period of t; and n is 73 prefecture-level cities. The value range of is [0, 1]. The larger the value of , the more significant the spatial pattern locking or path dependence of the in the Yellow River Basin, and the greater the transition resistance [55,56].

3.2. Spatial and Temporal Characteristics of the in the Yellow River Basin

3.3. Analysis of Influencing Factors of the

In order to provide a scientific decision-making basis for the sustainable utilization of water resources and green development of agriculture in the Yellow River Basin, the temporal and spatial variation characteristics and influencing paths of the agricultural grey water footprint were studied in this paper. The main conclusions are as follows:

Based on the above research conclusions, we proposed the following suggestions:

This study mainly focused on models and data analysis, and did not involve human factors considered to be dangerous. Therefore, ethical review and approval were waived for this study.

I would like to thank the American journal experts who edited this paper. I also appreciate the constructive suggestions and comments on the manuscript from the re-viewer(s) and editor(s).

The authors report that there is no potential conflict of interest. 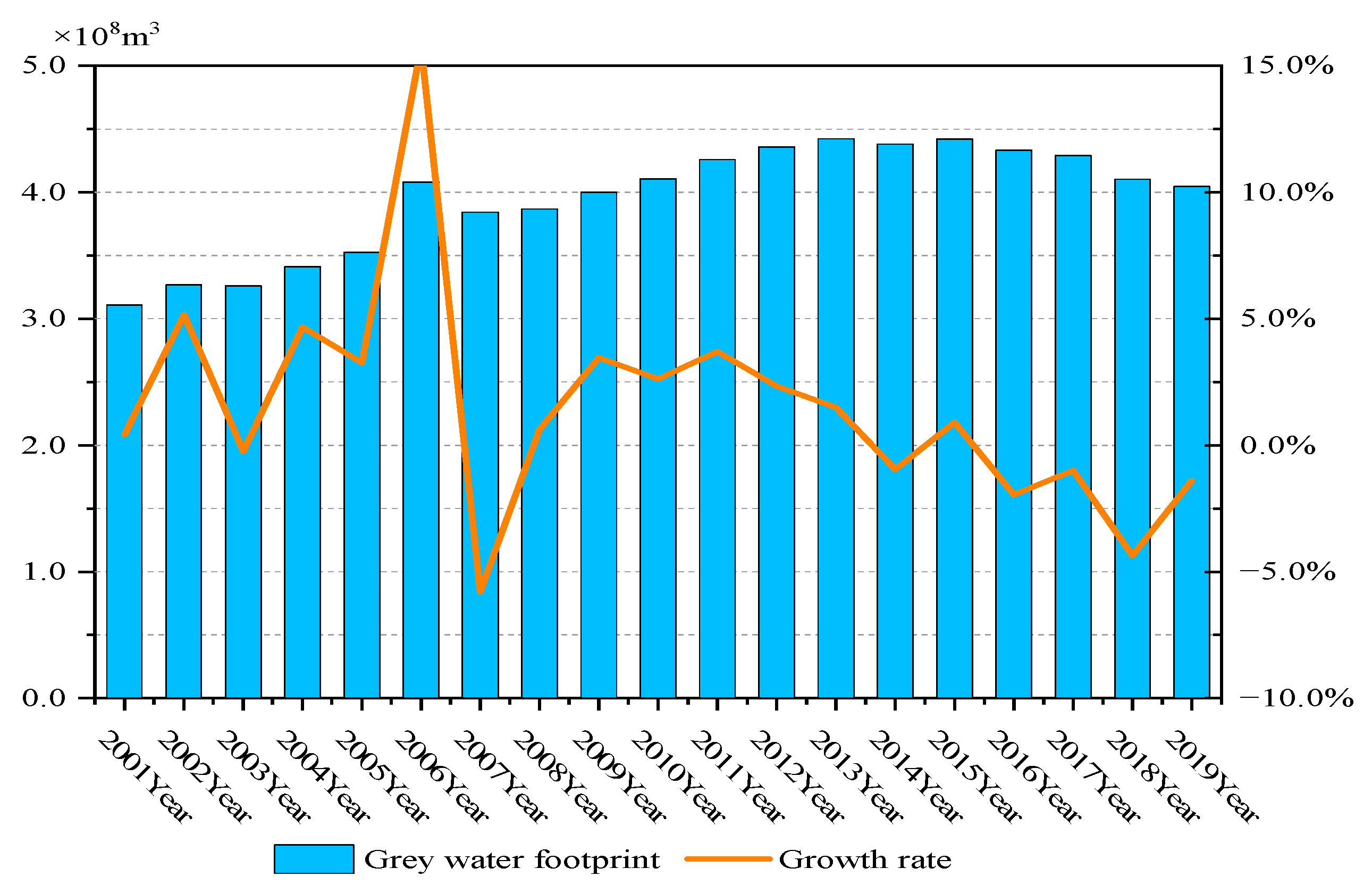