Derosion Lattice Performance and Optimization in Solving an End Effect Assessed by CFD: A Case Study in Thailand’s Beach

The Arctic is greatly affected by climate change. Increasing air temperatures drive permafrost thaw and an increase in coastal erosion and river discharge. This results in a greater input of sediment and organic matter into nearshore waters, impacting ecosystems by reducing light transmission through the water column and altering biogeochemistry. This potentially results in impacts on the subsistence economy of local people as well as the climate due to the transformation of suspended organic matter into greenhouse gases. Even though the impacts of increased suspended sediment concentrations and turbidity in the Arctic nearshore zone are well-studied, the mechanisms underpinning this increase are largely unknown. Wave energy and tides drive the level of turbidity in the temperate and tropical parts of the world, and this is generally assumed to also be the case in the Arctic. However, the tidal range is considerably lower in the Arctic, and processes related to the occurrence of permafrost have the potential to greatly contribute to nearshore turbidity. In this study, we use high-resolution satellite imagery alongside in situ and ERA5 reanalysis data of ocean and climate variables in order to identify the drivers of nearshore turbidity, along with its seasonality in the nearshore waters of Herschel Island Qikiqtaruk, in the western Canadian Arctic. Nearshore turbidity correlates well to wind direction, wind speed, significant wave height, and wave period. Nearshore turbidity is superiorly correlated to wind speed at the Beaufort Shelf compared to in situ measurements at Herschel Island Qikiqtaruk, showing that nearshore turbidity, albeit being of limited spatial extent, is influenced by large-scale weather and ocean phenomenons. We show that, in contrast to the temperate and tropical ocean, freshly eroded material is the predominant driver of nearshore turbidity in the Arctic, rather than resuspension, which is caused by the vulnerability of permafrost coasts to thermo-erosion. View Full-Text
Keywords: ocean color remote sensing; Arctic ocean; suspended sediment; Landsat; Sentinel 2; ERA5; nearshore zone ocean color remote sensing; Arctic ocean; suspended sediment; Landsat; Sentinel 2; ERA5; nearshore zone
►▼ Show Figures 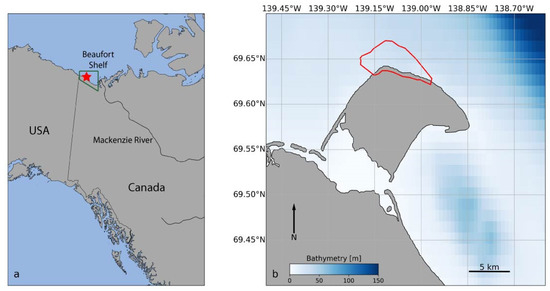