High-elevation ephemeral waters are sentinels of climate change, as they quickly respond to decreasing precipitation levels and increasing air temperatures. Fairy shrimps are among the most threatened invertebrates in ephemeral waters, as they are extremely vulnerable to habitat loss. Chirocephalus sibyllae is a fairy shrimp endemic to the Palazzo Borghese temporary pond, located within Sibillini Mountains National Park (Central Italy). The aims of the present study were to: (i) evaluate the physicochemical characteristics of C. sibyllae habitat, with special reference to climate changes over twenty years; (ii) document the life history, size, and abundance of C. sibyllae; and (iii) document the coexisting zooplankton fauna in Palazzo Borghese pond. The zooplankton community was monitored fortnightly, during the filling phases of the pond, from April 2019 to June 2021, using an 80 μm mesh net, within transects of known length. On each sampling occasion, 13 physicochemical parameters were measured, and water-level fluctuations and pond surface area were recorded. Compared to what was reported in the literature, in the last two years the wet phase of the Palazzo Borghese pond was shorter, and the pool dried up much earlier than in the past. The water quality was good and reflected the typical characteristics of high-mountain oligotrophic ponds. Orthophosphates seem to play a key role in zooplankton population abundance, increasing over time during the filling period. According to the extreme unpredictability of environmental features, the zooplankton community was composed of a very limited number of species, adapted to face drought conditions for most of the year. C. sibyllae life-history traits showed a high number of cysts in the broodpouch of ovigerous females (mean ± SD = 66.0 ± 38.9), and a higher mean total length of adults (1.72 cm for females and 1.76 cm for males), in comparison to data reported in the literature. The year 2019 was configured as the season with the most favorable conditions for the development of C. sibyllae; in 2020, the short duration of the pond did not allow the species to complete its life cycle. Climate change seems to pose the main threat to the species, considering that the progressive increase in air temperatures and the decrease in snowfall will, likely, lead to increasingly shorter filling phases of its habitat. View Full-Text
Keywords: fairy shrimp; steno-endemic species; high-elevation pond; ephemeral waters; climate changes; biodiversity conservation fairy shrimp; steno-endemic species; high-elevation pond; ephemeral waters; climate changes; biodiversity conservation
►▼ Show Figures 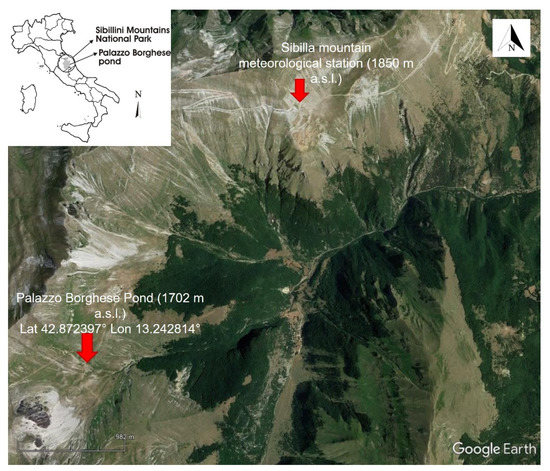