1
School of Hydraulic and Ecological Engineering, Nanchang Institute of Technology, Nanchang 330099, China
2
State Key Laboratory of Simulation and Regulation of Water Cycle in River Basin, China Institute of Water Resources and Hydropower Research, Beijing 100038, China
3
Faculty of Agriculture Engineering, Kunming University of Science and Technology, Kunming 650500, China
*
Author to whom correspondence should be addressed.
†
These authors contributed equally to this work.
Academic Editor: Alban Kuriqi
Water 2022, 14(11), 1744; https://doi.org/10.3390/w14111744
Received: 9 April 2022 / Revised: 26 May 2022 / Accepted: 26 May 2022 / Published: 29 May 2022
(This article belongs to the Topic Water Management in the Era of Climatic Change)

Reference Crop evapotranspiration (ET0) datasets based on reanalysis products can make up for the time discontinuity and the spatial insufficiency of surface meteorological platform data, which is of great significance for water resources planning and irrigation system formulation. However, a rigorous evaluation must be conducted to verify if reanalysis products have application values. This study first evaluated the ability of the second-generation China Meteorological Administration Land Data Assimilation System (CLDAS) dataset for officially estimating ET0 (the local meteorological station data is used as the reference dataset). The results suggest that the temperature data of CLDAS have high accuracy in all regions except the Qinghai Tibet Plateau (QTP) region. In contrast, the global solar radiation data accuracy is fair, and the relative humidity and wind speed data quality are poor. The overall accuracy of ET0 is acceptable other than QTP, but there are also less than 15% (103) of stations with significant errors. In terms of seasons, the error is largest in summer and smallest in winter. Additionally, there are inter-annual differences in the ET0 of this data set. Overall, the CLDAS dataset is expected to have good applicability in the Inner Mongolia Grassland area for estimating ET0, Northeast Taiwan, the Semi Northern Temperate zone, the Humid and Semi Humid warm Temperate zone, and the subtropical region. However, there are certain risks in other regions. In addition, of all seasons, summer and spring have the slightest bias, followed by autumn and winter. From 2017 to 2020, bias in 2019 and 2020 are the smallest, and the areas with large deviation are south of climate zone 3, the coastal area of climate zone 6, and the boundary area of climate zone 7. View Full-Text
Keywords: raw reanalysis data; grid data; reference evapotranspiration; meteorological variables; Penman-Monteith equation raw reanalysis data; grid data; reference evapotranspiration; meteorological variables; Penman-Monteith equation
►▼ Show Figures 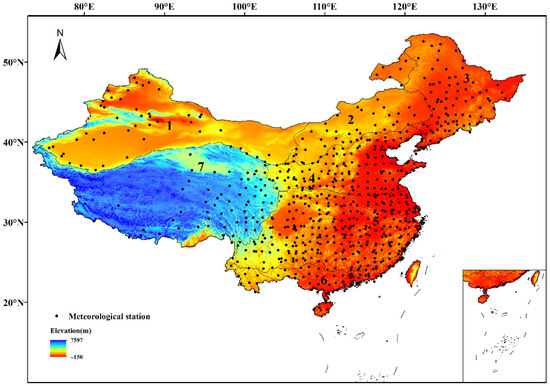