Greenhouse Gases Trade-Off from Ponds: An Overview of Emission Process and Their Driving Factors
Previous Article in Journal

Large-scale economic activities and rapid urbanization in recent years have created numerous environmental and developmental challenges. Due to enormous pressure on urban areas, cities are exposed to frequent flooding. For example, in China and other developing countries, a large number of cities are facing frequent flooding problems, resulting in huge social, economic, and environmental impacts [1,2]. Climate change is evident in the urban environment and increases in the global ambient temperature will cause severe flooding and depletion in water quality in major water resources in many developed and developing countries [3,4]. As waterlogging is considered as one of the major underlying causes of these impacts, the management of urban drainage is a big challenge for both researchers and government authorities [5,6]. Flooding is also one of the most common and destructive natural perils causing huge economic and human loss annually worldwide [7]. Continuous increases in the number of light vehicles e.g., cars in urban areas make it essential to find suitable locations for the construction of parking lots and permeable pavements. Due to the lack of proper research and guidelines for the construction and management of permeable pavements in parking lots and the selection of suitable sites, it is highly significant to evaluate the current situation of urban development and conduct proper research on permeable pavements [4,5,6,7,8].
Permeable pavements are regarded as one of the effective tools for controlling urban surface runoff and peak flow reduction, due to their high infiltration rate [3,7,8,9,10,11,12]. Hard pavement increases the impervious area in cities, causing problems, such as increased waterlogging risk, reduced groundwater recharge, and deterioration of the water environment [13,14]. Due to the rapid development of sponge city construction in China, permeable pavements are widely used in parking lots and roads with small loads [15,16], and play a crucial role in rainfall runoff reduction and retention [17]. Cheng et al. [18] installed two types of pavements (a porous asphalt bicycle lane and a permeable interlocking concrete brick) in Taipei City and found good stormwater runoff control performance, such as peak runoff and volume reduction. Their study also suggested that large-scale applications of porous pavements could help to mitigate urban heat island impacts. Park et al. [19] analyzed infiltrate characteristics of permeable concrete and permeable block pavement in a parking lot at full scale. Three scenarios of rainfall intensity were simulated and the results showed that permeable pavements delay the initial runoff time and reduce the peak flow. The total runoff was also reduced, which was shown by the runoff reduction ratio of each pavement. Ghisi et al. [20] used permeable interlocking concrete pavements to filter stormwater and assessed the possibility of the filtered water for non-potable uses in buildings. The quantity and quality of the filtered water were tested. The results showed that the use of permeable interlocking concrete pavement can be used for the pretreatment of non-potable water in buildings.
However, permeable pavement has many disadvantages, such as a long construction period, easy clogging, and difficult maintenance work, and these factors limit its applications [21]. Precast pervious concrete panels manufactured with open-graded aggregate is considered as an emerging, innovative product which has potentials to help solve these problems. This first project of the application of this product in parking lots have been reported [22].
At present, prefabricated permeable pavement can be divided into three categories: the first type is prefabricated on the surface layer (the surface layer is mainly constructed of permeable prefabricated concrete that interlocks with each other); the leveling layer (which consists of sand and gravel, etc.); and the base layer (which mainly consists of graded gravel and geotechnical materials) [18,19,20,21,22,23,24]. Walter et al. [25] designed interlocking permeable prefabricated concrete and pavement, which had the advantages of low maintenance, high quality, and cost-effectiveness, among others. The second type is prefabricated on the base [24,25,26]. The base is made of permeable prefabricated concrete that is interlocked with each other. The leveling layer is made of the same materials as the previous one, and the surface layer is made of permeable brick, permeable asphalt, and permeable concrete, etc. Yang et al. [27] have designed a prefabricated permeable sidewalk base block. The application results showed that the pavement had good permeable and water-retaining performance and strong compressive capacity. The third type adopts integral prefabrication, integral casting and forming, without distinguishing structural layers. Bateni et al. [28] developed a permeable pavement structure with micro-scale flood detention capacity. The main body was a hollow cylinder with hexagonal blocks on the top and the bottom. The simulated rainfall test showed that its hydrological effects met the requirements of a typical permeable pavement. When the rainfall return period is 1:100 years, the peak rainfall can be delayed by 15 min.
The existing literature reveals a lack of proper understanding regarding the use of prefabricated permeable pavement in parking lots and its impact of the hydrology. The aim of this study is to assess the runoff control performance of four types of permeable pavements under different rainfall intensities and different rainfall intervals. Laboratory experiments have been conducted to simulate conditions of areas which are prone to frequent flooding and waterlogging. In addition, the relative impact of the different composition materials in the leveling layer and different assembling forms of precast concrete at the base on their hydrological effect were also investigated to determine the optimal design.

Current work focused on analyzing hydrological effects of prefabricated permeable pavements was conducted at the Jiangsu Sponge City Material and Performance Testing Engineering and Technology Research Center, Kunshan, Jiangsu province, China.
Figure 1 shows the structural model of permeable pavements used in this study.
Surface layer: Permeable clay brick with a thickness of 55 mm;
Leveling layer: Natural sand-gravel or medium sand with a thickness of 100 mm. A layer of permeable geotextile was paved at the bottom;
Base layer: Permeable precast concrete components, which were divided into two types (a,b) according to different assembly forms. The schematic designs and the assembling structure of the precast concrete are shown in Figure 2. The type-a assembly was formed by splicing two L-shaped members up and down. The b-shaped piece included two L-shaped components and one “convex” shaped irregular component. Compared with type-a, the type-b assembled form had a tighter interlocking structure and a stronger carrying capacity. The strength grade of concrete was C20. The cementitious system contains both natural aggregate and recycled aggregate, and their ratio was 1:1. Aggregate gradation: 4.75–9.5 mm particle size accounted for 20%, 9.5–19 mm particle size accounted for 50%, and 19–31.5 mm particle size accounted for 30%. The aggregate-cement ratio was 3.5, and the water-cement ratio was 0.3. According to the results of our previous experiments, the compressive strength (28 day compressive strength was 11.53 Mpa) and porosity (21.3%) of the precast concrete were comprehensively optimal under this gradation. Subbase: natural graded gravel with a thickness of 50 mm. Impervious geotextile and geogrid were utilized at the bottom to prevent contamination in groundwater.
Four different types of prefabricated permeable pavements were made by using different materials for the leveling layer and assembly forms of the precast concrete components. Table 1 describes the individual designs.

The experimental device used in the current study (as shown in Figure 3) mainly consists of four parts: water supply facilities, flow regulation facilities, permeable pavement facilities, and rainfall-runoff collection facilities. The permeable pavement structure is placed in an iron cuboid box, which is 0.4 m long, 0.4 m wide and 0.5 m high. Every permeable pavement is 0.4 m long, 0.4 m wide and 0.45 m high. Tap water for simulating rainfall is stored in the water tank. The opening of the valve is adjusted according to the reading of the flowmeter to make the rainfall intensity meet the set value. The runoff generated from the surface overflowed through the overflow hole on one side of the device, and then it is collected and measured. The infiltrated rainwater is discharged through the drainage hole at the bottom of the device and is also collected and measured.

The experimental work was performed in the following steps:

This research was supported by National Natural Science Foundation of China (No. 51950410589).

The data presented in this study are available on request from authors.

Authors would like to thank Southeast University and Jiangsu Sponge City Material and Performance Testing Engineering and Technology Research Center, Kunshan for providing necessary permissions and facilities for conducting this work. 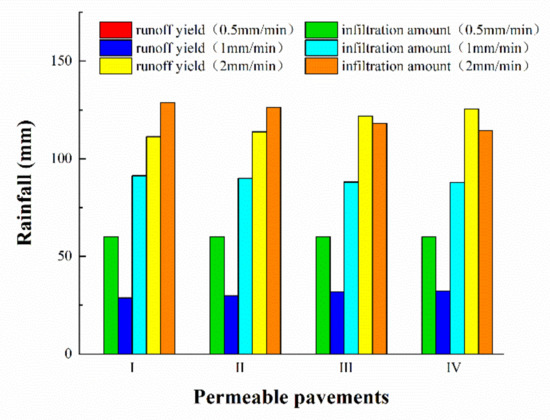 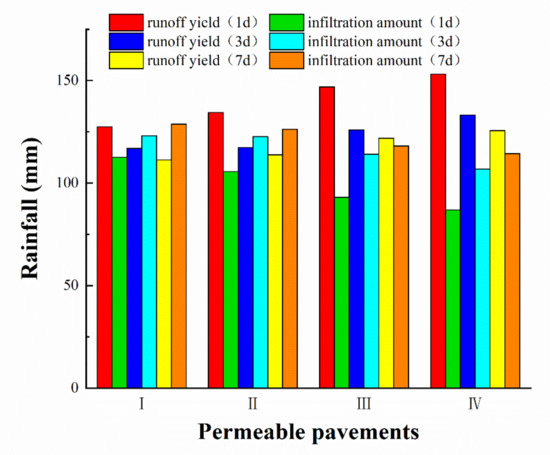