Produced water (PW) is the largest waste stream generated by the oil and gas industry. Traditional treatment of PW burdens the industry with significant expenses and environmental issues. Alternatively, microalgal-based bioremediation of PW is often viewed as an ecologically safe and sustainable platform for treating PW. Moreover, the nutrients in PW could support algal growth. However, significant dilution of PW is often required in algal-based systems due to the presence of complex chemical contaminants. In light of these facts, the current work has investigated the potential of cultivating Galdieria sulphuraria and Chlorella vulgaris in PW using multiple dilutions; 0% PW, 5% PW, 10% PW, 20% PW, 50% PW and 100% PW. While both algal strains can grow in PW, the current results indicated that G. sulphuraria has a higher potential of growth in up to 50% PW (total dissolved solids of up to 55 g L−1) with a growth rate of 0.72 ± 0.05 g L−1 d−1 and can achieve a final biomass density of 4.28 ± 0.16 g L−1 in seven days without the need for additional micronutrients. Additionally, the algae showed the potential of removing 99.6 ± 0.2% nitrogen and 74.2 ± 8.5% phosphorus from the PW. View Full-Text
Keywords: microalgae; Galdieria sulphuraria; Chlorella vulgaris; growth; biomass; nitrogen; phosphorus; salinity; thermophilic; bioremediation; produced water microalgae; Galdieria sulphuraria; Chlorella vulgaris; growth; biomass; nitrogen; phosphorus; salinity; thermophilic; bioremediation; produced water
►▼ Show Figures 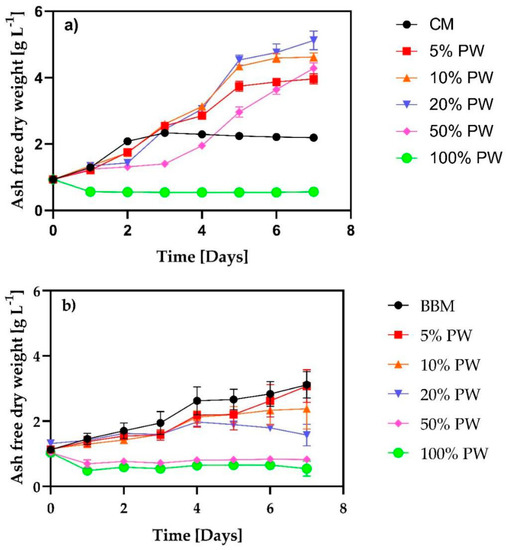