To What Extent Can a Sediment Yield Model Be Trusted? A Case Study from the Passaúna Catchment, Brazil
Previous Article in Journal

The modeling of karst water level fluctuations is a crucial task in the water resource management of vulnerable karstic areas. In the Transdanubian Range (East Central Europe, Hungary), from 1950 to 1990, coal and bauxite mining were carried out, with large amounts of karst water being extracted, thus lowering the water table by amounts ranging between 10 and 100 m. Since the cessation of mining activities in the early 1990s, the volume of natural recharge has exceeded the amount of dewatering, and the system has begun to return to its original undisturbed state. This apparently welcome development does, however, bring economic and technical engineering problems. The estimation and prediction of such water level changes is often tackled via the use of deterministic approaches, however, in the present case, it is also addressed with an alternative approach using trend estimation to monthly water level data from 107 karst water wells over the period 1990–2017. To approximate the change in karst water levels, (i) growth curve models were fitted to the monthly data, allowing the estimation of karst water levels, at least as far as 2030. Similarly, this was also done with (ii) deterministic modelling in order to describe the recovery process up to 2030. Specifically, measured and predicted values for karst water level were used to derive interpolated (kriged) maps to compare the forecasting power of the two approaches. Comparing the results of the trend analysis with those of the traditional deterministic modelling results, it is apparent that the two approaches predict similar spatial distribution of water levels, but slightly different future water level values. View Full-Text
Keywords: mining; aquifer recovery; growth curves; trend estimation; forecasting; variography mining; aquifer recovery; growth curves; trend estimation; forecasting; variography
►▼ Show Figures 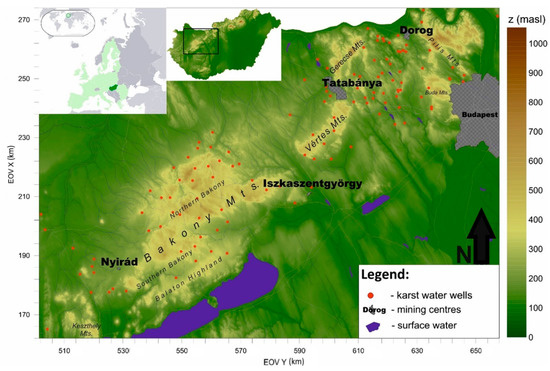