Urban Rainwater and Flood Management
Next Article in Special Issue

Endocrine-Disrupting Compounds: An Overview on Their Occurrence in the Aquatic Environment and Human Exposure
Previous Article in Journal

Testing the Efficiency of Parameter Disaggregation for Distributed Rainfall-Runoff Modelling

Microplastics (MP) have recently been considered as emerging contaminants in the water environment. In the last number of years, the number of studies on MP has grown quickly due to the increasing consciousness of the potential risks for human health related to MP exposure. The present review article discusses scientific literature regarding MP occurrence and accumulation on the aquatic compartment (river, lake, wastewater, seafood), the analytical methods used to assess their concentration, their fate and transport to humans, and delineates the urgent areas for future research. To better analogize literature data regarding MP occurrence in the aquatic compartment we subdivided papers based on sampling, analytical methods, and concentration units with the aim to help the reader identify the similarities and differences of the considered research papers, thus making the comparison of literature data easier and the individuation of the most relevant articles for the reader’s interests faster. Furthermore, we argued about several ways for MP transport to humans, highlighting some gaps in analytical methods based on the reviewed publications. We suggest improving studies on developing standardized protocols to collect, process, and analyze samples. View Full-Text
Keywords: emerging contaminants; microplastics pollution; aquatic environment; analytical methods emerging contaminants; microplastics pollution; aquatic environment; analytical methods
►▼ Show Figures 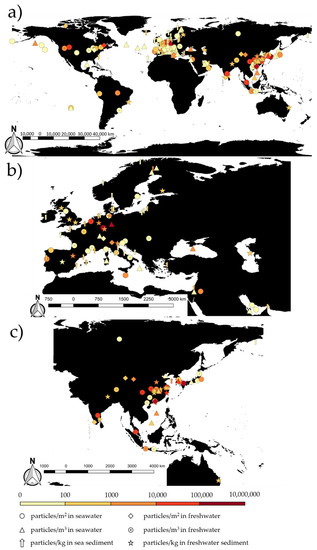