The Effect of the Effluent from a Small-Scale Conventional Wastewater Treatment Plant Treating Municipal Wastewater on the Composition and Abundance of the Microbial Community, Antibiotic Resistome, and Pathogens in the Sediment and Water of a Receiving Stream
Next Article in Special Issue

Seasonal Variability of Nutrients and Radium Isotope Fluxes from Submarine Karstic Spring at the Southwest of Crimea, Black Sea
Previous Article in Journal

Spatial and Temporal Changes of Groundwater Storage in the Quaternary Aquifer, UAE

To study the temporal and spatial variations of the groundwater quantity and quality in response to intensive groundwater exploitation from the Quaternary aquifer in UAE, a water budget model with a cell size of one km2 was developed. The available historical records of groundwater levels and salinity have been used to develop the water table and salinity maps of UAE for the years 1969, 2005, 2010, and 2015. The available water resources and soil information system was used to facilitate validity, cogency, and consistency of the groundwater analysis. The spatial analysis module of GIS was used to define the aquifer setting, saturated thickness, aquifer base elevation, effective porosity, and groundwater salinity at each grid cell. The obtained results indicated that the volume of fresh groundwater resources in the Quaternary aquifer in UAE has decreased from 238 km3 in 1969 to around 10 km3 in 2015. A major part of these depleted fresh groundwater resources was replaced by brackish water, and, therefore, the total groundwater storage in this aquifer has only decreased from 977 in 1969 to 922 km3 in 2015, respectively. If the same groundwater exploitation continues, the freshwater storage in the surficial aquifer might be totally depleted in agricultural areas. Most probably, the brackish groundwater resources will be exploited. In such areas, more attention should be devoted to the management of brackish water resources to avoid the exacerbation of the saltwater intrusion problem. Despite the fact that the obtained results indicate the negative impacts of the improper water resources management in a small part of the arid area, the learned lessons are valid for other arid countries, in particular, using the proper steady state boundary conditions for the initial conditions in modeling the available future management alternatives. View Full-Text
Keywords: groundwater storage; groundwater recharge; managed aquifer recharge; water budget model; UAE groundwater storage; groundwater recharge; managed aquifer recharge; water budget model; UAE
►▼ Show Figures 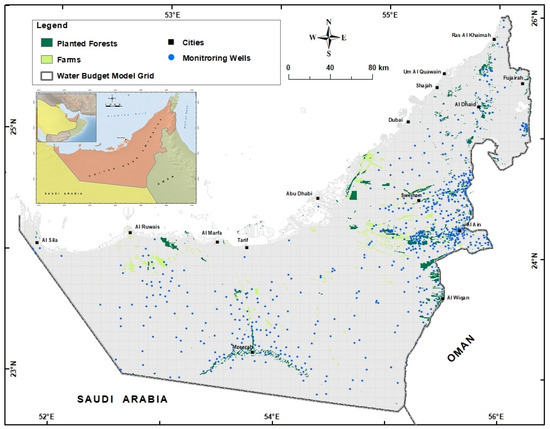