The Past, Present, and Future of Phosphorus Removal Structures

The taxonomy-based response pattern of macroinvertebrates to sediment stress is well established, with tolerant taxa increasing in impacted conditions, while sensitive taxa decrease along a deteriorating water quality gradient. However, the distribution patterns of traits in response to environmental stress gradient, including suspended sediments, remain unclear, particularly in Africa, where trait-based studies are under-explored. We examined the distribution patterns of macroinvertebrate traits along a suspended sediment stress gradient and identified tolerant and sensitive traits for suspended sediment stress. We sampled macroinvertebrates and environmental variables seasonally in winter, spring, summer and autumn of 2016 to 2018 in eight selected sites in the Tsitsa River and its tributaries. We selected 12 traits and ecological preferences, resolved them into 47 trait attributes, and analysed them using the RLQ and fourth-corner analyses. Our results revealed that macroinvertebrate traits and ecological preferences were differentially influenced by fine suspended sediments in the Tsitsa River and its tributaries. Traits such as a preference for CPOM, collector-filtering, and a high sensitivity to oxygen depletion, were deemed sensitive to suspended sediments stress, exhibiting positive associations with the control sites, and negatively associated with any of the environmental parameters (sediment grain sizes, turbidity, TSS and EC). Tolerant indicator traits included a high tolerance of oxygen depletion, skating and a preference for FPOM. The fourth-corner analysis results indicated that suspended fine sediment grain sizes, (including coarse sand, fine silt and clay) were the most important variables influencing macroinvertebrate trait distribution patterns during the dry season, while gravel, mud and medium sand were more important during the wet season. Overall, our study provided critical insights towards trait-based responses of macroinvertebrates communities to suspended sediment stress, key information that could stimulate the development of macroinvertebrate trait-based biomonitoring tools for the assessment of suspended sediment stress in the Afrotropical region. View Full-Text
Keywords: biomonitoring; freshwater; pollution; RLQ; sediments biomonitoring; freshwater; pollution; RLQ; sediments
►▼ Show Figures 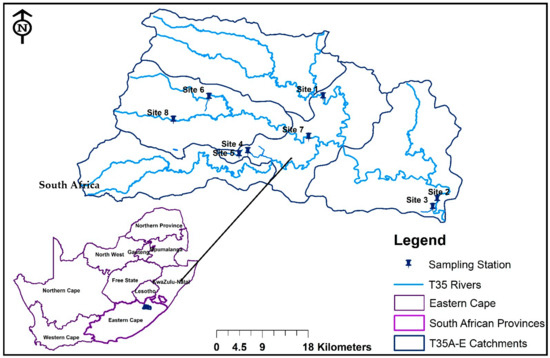