Urban development within watersheds impacts the hydrology and water quality of streams, but changes to groundwater–surface water interactions in this “urban stream syndrome” are not yet well understood. This study focused on three stream systems in a northern Virginia (USA) protected area with 14.2, 31.7, and 66.1% developed land in their watersheds. Surface water was sampled weekly for nutrients, dissolved metals, sulfate, ancillary water quality parameters, and discharge over two non-consecutive years with the hyporheic zone sampled during the second year. Concentration–discharge relationships revealed largely chemostatic behavior in surface water solutes in the least urbanized stream, while in the two more urbanized streams, these relationships tended to have significant positive and negative slopes, indicating diverse delivery pathways depending on the constituent. In the least urbanized stream, linear regressions between discharge and solute concentrations in hyporheic water had exclusively negative slopes, indicating source-limited delivery, while the other two urbanized streams maintained largely chemostatic behavior. Average specific conductance and nitrate + nitrite concentrations in stream surface water reflected an urbanization gradient, while sulfate, Ca, K and Sr concentrations suggested a threshold effect: the stream with a mostly forested watershed had the lowest concentrations, while the other two were higher and similar. Specific conductance indicated salinization of both surface and groundwater at the two more urban streams, possibly threatening aquatic organisms. Metal concentrations in surface and subsurface water were often positively correlated with specific conductance and negatively correlated with pH, suggesting that they may originate from road salt and/or be mobilized by acid precipitation. These results indicate the importance of monitoring both baseflow and stormflow as pathways for pollution. View Full-Text
Keywords: concentration–discharge relationships; streams; hyporheic zone; urbanization; nutrients; metals concentration–discharge relationships; streams; hyporheic zone; urbanization; nutrients; metals
►▼ Show Figures 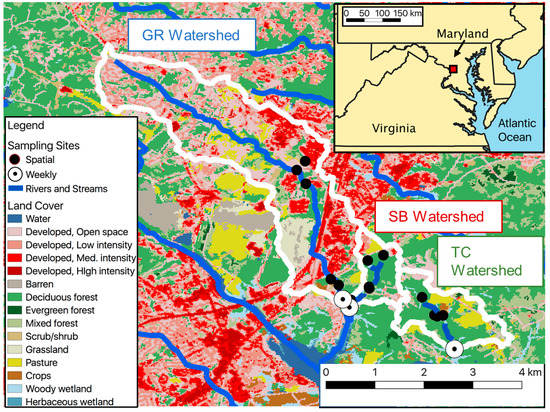 Jessica A. Balerna
Jessica A. Balerna is a Ph.D. candidate in Integrative Biology at the University of South Florida and a graduate of American University (B.S. with honors in Environmental Science, minors in Anthropology and Statistics). Her dissertation research focuses on understanding relationships between water management and wetland ecohydrologic function.

Jacob C. Melone
Jacob C. Melone earned a B.S. in Biology from Christopher Newport University and an M.S. in Environmental Science from American University. He currently works as an environmental consultant focusing on cradle-to-cradle product design and certification.

Karen L. Knee
Dr. Karen L. Knee is an associate professor of environmental science at American University. She studied at Brown University (Sc.B. with honors in Environmental Science) and Stanford University (Ph.D., Geological and Environmental Science) and was a Fulbright scholar in Ecuador and a postdoctoral fellow at the Smithsonian Environmental Research Center. Her research focuses on human influences on water quality, pollutant transport, and innovative uses of the natural tracers radium and radon.
Zoom | Orient | As Lines | As Sticks | As Cartoon | As Surface | Previous Scene | Next Scene
We use cookies on our website to ensure you get the best experience. Read more about our cookies here.
Accept
We have just recently launched a new version of our website. Help us to further improve by taking part in this short 5 minute survey here. here.
Never show this again