Estimation of Growth Parameters of the Black Scallop Mimachlamys Varia in the Gulf of Taranto (Ionian Sea, Southern Italy)

The high variability in natural recruitment of Pectinidae is a common feature of many marine invertebrates with a pelagic larval stage, but may negatively affect aquaculture activities. Detailed information on settlement patterns and spat availability is required to reduce costs and labor. In this regard, we attempted to establish the precise immersion time and the deployment dates for spat collectors in the Taranto Gulf (Mediterranean Sea, Italy). The first experiment was carried out from June to October 2013, deploying collectors every 15 days and retrieving them after 4, 6, 8, and 10 weeks. Results from the first experiment allowed us to select 8 weeks as the best immersion time for spat collection. The second experiment was carried out from June 2013 to July 2014 when we deployed spat collectors every 15 days and recovered them after 8 weeks to detect the favorable periods to place the collectors in water to obtain the highest scallop spat harvest rate. Mimachlamys varia was the most abundant pectinid (greater than 90%), whose recruits were collected during most of the year studied, followed by Flexopecten glaber with the highest rates in July (87%) and Pecten jacobaeus, which never exceeded 17% of collected spat. M. varia had a long recruitment period (from October to early June), F. glaber showed a high number of spat during autumn months and from June to July while P. jacobaeus showed a restricted period of spawning. Our experiments provide useful insights into strategies for establishing scallop aquaculture in order to promote these mollusks as alternative candidates for aquaculture farming in the area. View Full-Text
Keywords: scallops; collectors; spat recruitment; Ionian Sea; Mediterranean Sea scallops; collectors; spat recruitment; Ionian Sea; Mediterranean Sea
►▼ Show Figures 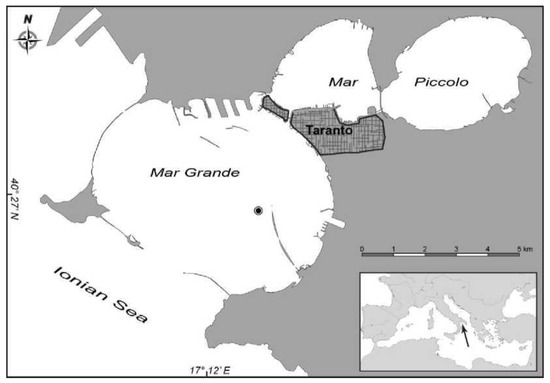