Major Elements in the Upstream of Three Gorges Reservoir: An Investigation of Chemical Weathering and Water Quality during Flood Events

Rivers transport terrestrial matter into the ocean, constituting a fundamental channel between inland and oceanic ecosystem and affect global climate change. To reveal chemical weathering processes and environmental health risks during flood periods, water samples were collected in the upper reaches of Three Gorges Reservoir (TGR) in 2020. HCO3− and Ca2+ were the most abundant anions and cations of the river water, respectively. The range of HCO3− concentration was between 1.81 and 3.02 mmol/L, while the mean content of Ca2+ was 1.03 mmol/L. The results of the Piper diagram and element ratios revealed that the river solutes were mainly contributed by carbonate weathering and gypsum-rich evaporite dissolution. A mass balance model indicated that the contribution order of sources to cations in the main channel (Yibin-Luzhou) was evaporites > carbonates > atmospheric input > silicates. The order in the Chongqing—Three Gorges Dam was carbonates > atmospheric input > evaporites > silicates. These results showed a lithologic control on hydrochemical characteristics. Most sampling sites were suitable for agricultural irrigation according to the water quality assessment. However, indexes sodium adsorption ratio (SAR) and soluble sodium percentage (Na%) were higher than 1.0 in Yibin-Luzhou and 30% in Yibin–Chongqing, respectively, suggesting a potential sodium hazard. In addition, except Tuojiang River and Shennong River, the risk of sodium hazard in tributaries was relatively low. High Na+ concentration in irrigation water can damage soil structure and function and ultimately affect agricultural production. Water quality in the upstream of a Piper diagram should attract enough attention. View Full-Text
Keywords: water chemistry; Three Gorges Reservoir; major ions; source apportionment; China water chemistry; Three Gorges Reservoir; major ions; source apportionment; China
►▼ Show Figures 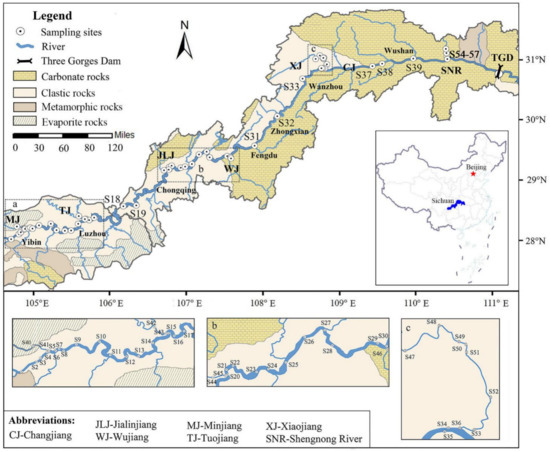