Previous studies [1,65,66,67,68] have confirmed that the sea surface parameters SSH, SST, SSS and SSW can help in retrieving the thermal structure of the subsurface. We show here that the accuracy of the temperature estimation can be improved by adding the SSV as a variable on the basis of the existing SSH, SST, SST and SSW fields. Including more independent variables as input parameters of the model might therefore be a reasonable approach to improving the accuracy of the estimation. Variables such as the solar radiation and net heat flux [1] and the mixed-layer depth [89] might help to improve the accuracy of the estimation [90]. However, the computation requirements increase as the number of input variables increases and we therefore need to evaluate which variables are more effective in the estimation of temperature.
These results show a weaker seasonal variability of the deeper temperature fields than the natural variability (Figure 3 and Figure 4). Possible reasons for these weak seasonal signals are: (1) the original CMEMS training data lack seasonal variation signals; and (2) the BPNN model cannot correctly extract the seasonal signals that exist in the original training data. By analyzing the original target temperature field, we showed that the weak seasonal signal in these results is because the original target data lack seasonal variation signals (Figure 10). The state of the original target temperature field used for training therefore has an important impact on the results. We used model assimilation datasets for training. In future work, we will also consider using datasets combined with observational data from diverse sources, such as the training data, because the observed datasets can enhance the seasonal variation signal and might further improve the accuracy of the estimation.
The datasets also play an important role in model training and determine the range of application of the trained model. All the datasets used in this study are monthly mean values with the same spatial resolution of (0.25° × 0.25°) and therefore the model can reasonably estimate the subsurface temperature field with the same or lower resolution, but might not accurately capture signals with a higher temporal or spatial resolution. The temperatures estimated by the model are mostly confined to the temperature range used as the target, which means that if there is an abnormally high or low temperature in the study area, then this may be underestimated by the BPNN model. This might be solved by increasing the grid density and improving the computing power. Our trained model may have fitted well to the data source because the optimum weights of the model were trained by these datasets. However, datasets of the same variable obtained in different institutions may vary as a result of the different sources of the original data and different processing techniques. Therefore, the accuracy of the estimation may not be satisfactory when applying the trained BPNN model to other datasets and it would be better to use a combination of datasets from the same source as the application to train the model. In summary, the systematic errors of our model mainly came from the datasets we used and partly came from the network training parameters setting.
The Kling–Gupta efficiency (KGE) and Nash–Sutcliffe efficiency (NSE) are also commonly used statistical indexes in the evaluation of hydrological models [91,92,93,94]. Therefore, we firstly applied Equation (1) [91] to the four cases shown in Figure 7: where r is the linear correlation between the observed and simulated temperatures, is the standard deviation of the estimated temperatures, is the standard deviation of the observed temperatures, is the estimated mean temperature and is the observed mean temperature. The KGE of cases (a), (b), (c), and (d) in Figure 7 are 0.969, 0.789, 0.933 and 0.986, respectively. Then, we use another four cases located at e (18.125° N, 141.125° E), f (28.375° N, 161.625° E), g (45.125° N, 166.375° W) and h (33.875° N, 129.875° W) to test the accuracy expressed by NSE. We use Equation (2) to calculate NSE since NSE and MSE are closely related [93]: where is the standard deviation of the observed temperatures. The NSE values of the cases (e), (f), (g) and (h) are 0.9958, 0.9962, 0.8920 and 0.9737, respectively. The closer the KGE and NSE are to 1, the better the agreement between the estimations and observations. The model can therefore perform well under the metric of the KGE and NSE, which further verifies the stability of the model.
There is some concern about the performance of other machine learning methods when they are applied to relative studies. The advantage of unsupervised learning methods over supervised learning methods is the completion of training and adaptive clustering without labels. The SOM, a popular unsupervised learning algorithm in the field of computer vision, was applied to estimate the subsurface temperature in the North Atlantic and showed good performance in the depth range 30–700 m with a correlation coefficient of about 0.8 [63]. The results were not as good as those presented in this paper. This may be because, in addition to a lack of input parameters (SSW and SSV), the SOM algorithm itself is limited in estimating the subsurface temperature. SOM users must select the parameters, neighborhood function, grid type and centroid number before training, which introduces more artificial errors. Unlike a supervised learning method, the SOM method lacks a specific objective function. The BPNN method is therefore more suitable for regression analyses, such as subsurface temperature estimation, despite the advantages of the SOM in clustering analysis. The BPNN model is trained by machine learning algorithms and is essentially a fitting function. It is not restricted by physical mechanisms and may therefore cause unknown problems and instabilities. This might be a common failing of artificial intelligence methods in relative studies [63,65,66,67,90]. Future research should therefore consider coupling physical models with the data-driven machine learning model.

We introduced a BPNN method to estimate the internal temperature structure of the NPO based on sea surface parameters (SSH, SST, SSS, SSW and SSV). The BPNN method is one of the most popular machine learning methods and showed good performance in retrieving the thermal structure of the ocean subsurface. The estimated temperature field at each depth was verified by the observed temperature field and the accuracy of the estimation by the model was determined using the MSE and R² values. Our results show that the temperature estimation based on the BPNN model is both reliable and accurate. The correlation between the predicted and measured results was improved over those in previous models.
We analyzed the influence of different sea surface parameter combinations on the estimation of temperature through comparative experiments. In addition to the previously used variables (the SSH, SST, SSS and SSW) [1,63,64,65,66,67], we added the SSV as a new component and therefore the non-linear subsurface dynamics due to the advection associated with the SSV were taken into account. This improved the estimated temperature, especially in regions with a strong current. As a consequence, the accuracy of the BPNN model with five input parameters was higher than that of the BPNN model with four input parameters. This suggests that models with more sea surface parameters (e.g., the net heat flux) should be investigated to determine whether they can improve the accuracy of the model.
It should be noted that our results were sensitive to the original training data, which has a weaker seasonal variability than the in-situ data. This should be the general disadvantage of AI methods, that is, the accuracy of training data will affect the final output result. It is valuable to estimate how the error of original training data transmits along with the BPNN model to the final result, which could provide with us the uncertainty of the result in future. In addition, the temporal or spatial resolutions in this study may have missed some of the mesoscale dynamics, which can lead to extreme temperatures. These problems will be investigated in future work.
We developed a method to determine the thermal structure of the ocean interior based on the sea surface parameters measured by satellites. This study will help the development of deep-sea remote sensing technology based on machine learning and provide technical support for the construction of ocean observation datasets. This model provides a comprehensive understanding of the internal dynamics of the marine environment, which is crucial in studies of the global climate. However, the sea surface parameters used in the machine learning model are still limited and the dynamic mechanisms of the estimated results have not yet been explained. There is therefore still room to improve the accuracy of the estimation of the internal thermal structure of the ocean. Future work will consider the global-scale ocean with more surface datasets to retrieve internal parameters such as the 3D salinity and velocity fields. We will compare the results of our study with other approaches such as statistical methods and other machine learning methods to further verify the reliability and applicability of the proposed method. Advanced deep learning methods will be combined with dynamic methods to give more explanatory results.

This work was supported by the National Foundation of Natural Science of China (No. 41876013) and the National Program on Global Change and Air–Sea Interaction (GASI-IPOVAI-04).

We thank Copernicus Marine and Environmental Monitoring Service (CMEMS) for providing SSH, SST, SSS, SSV data (https://marine.copernicus.eu/), the Research Data Archive at the NCAR for the CCMP SSW data (https://rda.ucar.edu/datasets/ds745.1/), which are freely accessible for public. We are grateful to the anonymous reviewers whose comments and suggestions have helped improve the manuscript. 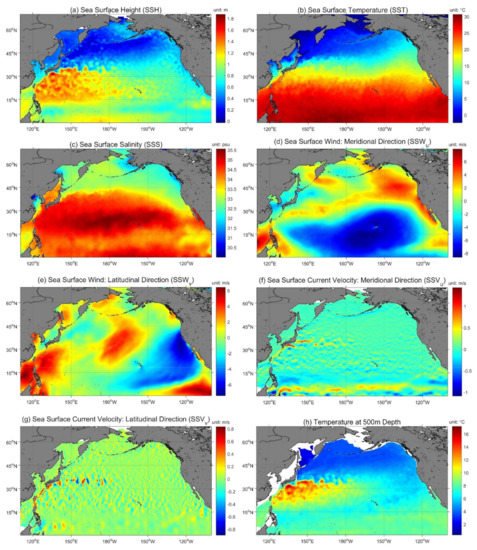 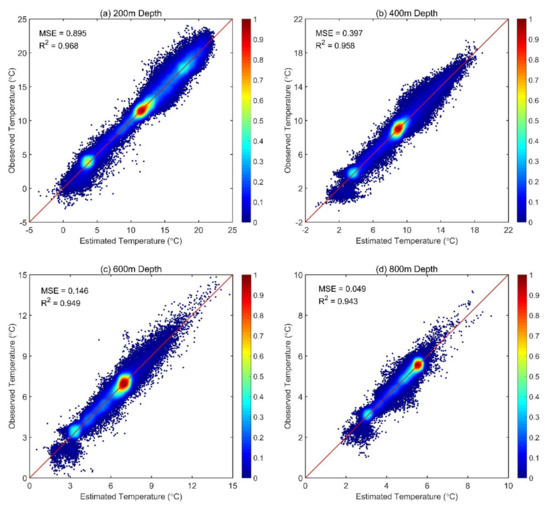 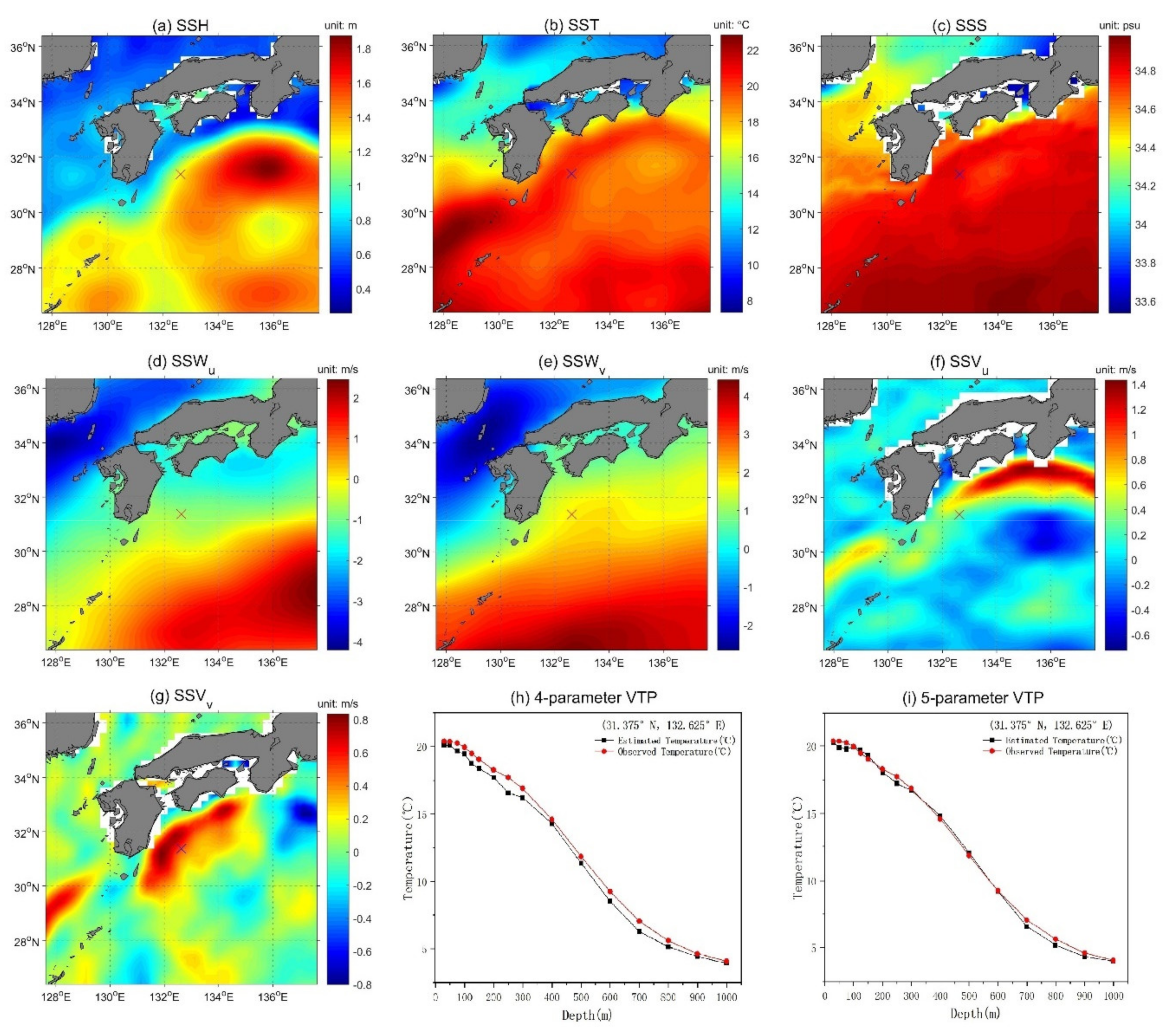 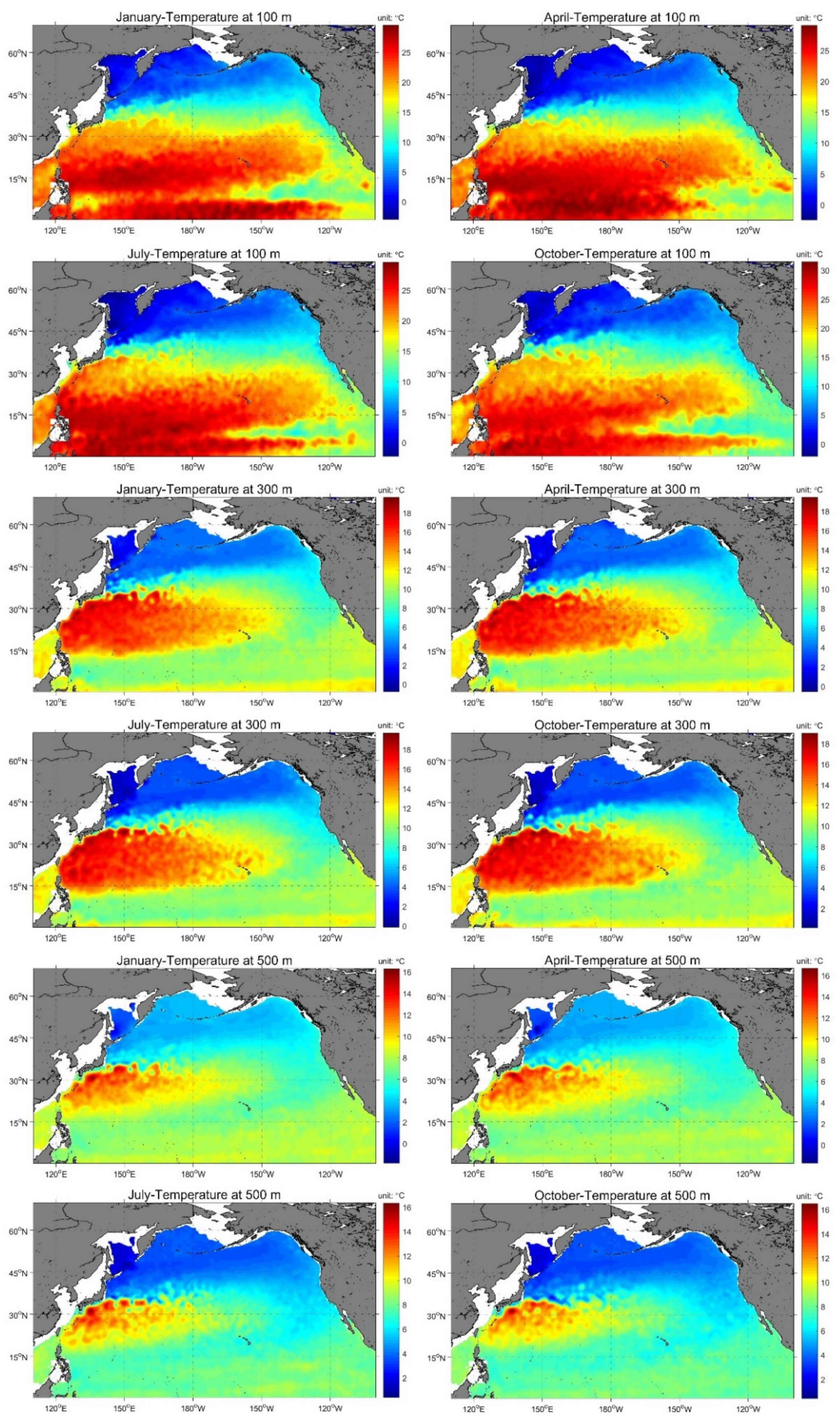