Equity vs. Efficiency and the Human Right to Water
Previous Article in Journal

The understanding of hydro systems is of great importance in monitoring quantitative and qualitative changes in water resources. The Essaouira region at the edge of the Moroccan Atlantic Ocean is subject to a semi-arid climate. The decrease in rainfall as a result of climate change and the increase in the exploitation of surface and groundwater have disrupted the stability of these resources and threaten the socio-economic and environmental balance in the area under investigation. Climate scenarios estimate that precipitation will decrease by 10–20% while warming increases by 3 °C over the next 30 years. The physico-chemical parameters studied show that the evolution of the pH and temperature of the groundwater remained stable with a neutral (pH ≈ 7) and a hypothermal character (T < 30 °C). For the electrical conductivity, it showed an increasing trend from 2017 to 2020. A hydrochemical approach showed that the groundwater mineralization was controlled by the dissolution of evaporites and carbonates, by cation exchange processes, and by seawater contamination. A groundwater assessment for drinking use was made by comparing the concentrations of the chemical elements with the standards set by the World Health Organization. The results obtained show that the groundwater from the aquifers studied requires treatment before being consumed, in particular for Cl− and SO42−. Furthermore, the groundwater quality for irrigation was evaluated based on the parameters Na% and Sodium Adsorption Ratio (SAR). The results showed that the groundwater was adequate for agricultural purposes, especially for the plants that adapt to high salinity. The monitoring of surface water by processing the satellite images via the calculation of the normalized difference water index (NDWI) showed an increase in water surface areas in the region following the commissioning of two large dams (Zerrar and Igouzoullene). Despite the installation of these hydraulic structures, a drop of 4.85 km2 in water surface area was observed beyond 2016. This situation requires intervention in order to preserve this vital resource. View Full-Text
Keywords: groundwater; NDWI; water surface; semi-arid area; GIS groundwater; NDWI; water surface; semi-arid area; GIS
►▼ Show Figures 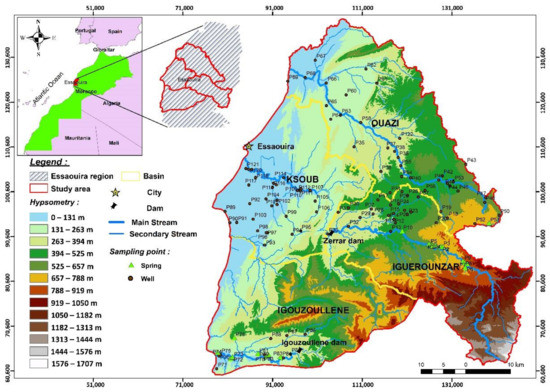